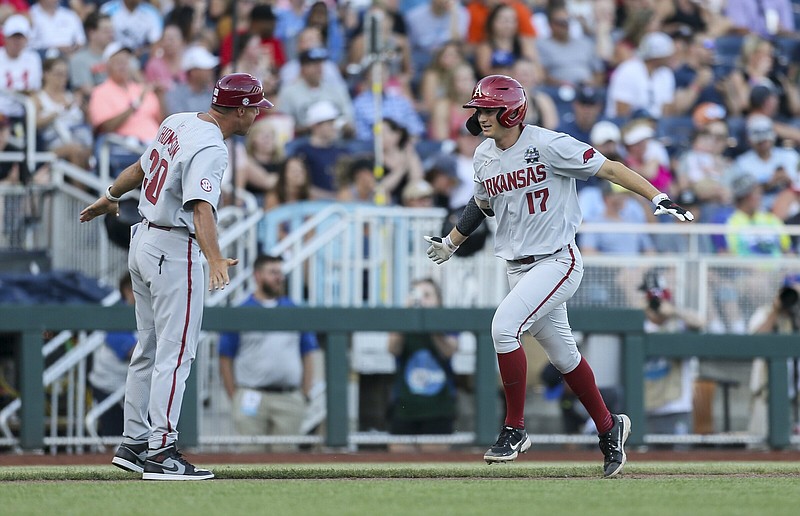 Arkansas’ Brady Slavens is congratulated by third-base coach Nate Thompson after hitting a home run in the fifth inning against Ole Miss at the College World Series on Wednesday night in Omaha, Neb. The home run to center field was measured at 436 feet. More photos available at arkansasonline.com/623cws. (NWA Democrat-Gazette/Charlie Kaijo)

The home run cleared the 408 decal on the center-field fence and nearly hit a post that helps hold up the high-rise video box deep in center field.

Slavens' solo shot, which gave Arkansas a 2-1 lead, was his 16th of the season, tying Cayden Wallace for the team lead.

Only three players have hit a home run in the center-field gap in the stands at Charles Schwab Field, formerly known as TD Ameritrade Park. Slavens joined Florida State's Dylan Busby and Florida's Pete Alonso as players who have homered into the center-field gap.

Alonso and Auburn's Edouard Julien held the previous CWS home run distance at 429 feet. Alonso hit his home run against Virginia in 2015, and Julien hit his in 2019 against Mississippi State.

Slavens hit the longest home run at the park since Creighton's Parker Upton launched a 441-foot homer on April 30, 2021, against St. John's.

Arkansas third baseman Cayden Wallace showed off his speed to notch his 20th double of the year in the eighth inning.

Wallace ripped a shot just inside the third-base bag that ate up Garrett Wood, glancing off his glove and rolling into shallow left field. Wallace never hesitated charging around first and sprinting toward second.

Wood retrieved the loose ball and fired a strike to second baseman Peyton Chatagnier, who applied the tag to the head-first sliding Wallace. The call of safe on the field was confirmed by replay review.

Wallace broke a tie for the team lead with Robert Moore.

Arkansas sophomore Robert Moore won a Gold Glove Award on Wednesday as the best second baseman in Division I college baseball as selected by Rawlings and the American Baseball Coaches Association.

He is the first Razorback to win a Gold Glove Award, which was first awarded at the college level in 2007. Other finalists at second base were Matt McDermott of Coastal Carolina and Mario Camilletti of Central Michigan.

Moore was fielding .992 entering Wednesday's game against Ole Miss, with 2 errors in 163 attempts and a hand in 46 double plays.

In a lengthy post on his Twitter page, Moore thanked several teammates and coaches for their help. Among those he singled out were first baseman Peyton Stovall, third baseman Cayden Wallace and shortstop Jalen Battles.

"This is just as much Peyton, Jalen and Cayden's award as it is mine," Moore wrote.

"So very deserving!" Arkansas assistant coach Nate Thompson tweeted Wednesday of Moore's award. "So many plus defenders on this team. Special group of defenders."

Moore's great fielding has been on display throughout the College World Series. He made the No. 9 play on ESPN SportsCenter's list Saturday when he fielded a ball on the opposite side of second base and threw across his body to record an out at first base. On Tuesday, he began a 4-6-3 double play that ended an 11-1 victory over Auburn.

Arkansas pitcher Connor Noland was a finalist for a Gold Glove, which went to Iowa's Ben Beutel.

Arkansas five-hole batter Chris Lanzilli has three home runs, more than a quarter of his total of 11, at the series. His latest was a 382-foot solo shot off Ole Miss left-hander John Gaddis to lead off the second inning on Wednesday. The ball hit a railing about 18 inches above the yellow line at the top of the left-field wall, beyond the reach of Ole Miss left fielder Kevin Graham.

Arkansas center fielder Braydon Webb is 4 for 4 in leadoff at-bats in Omaha following his shot to left field for a double against John Gaddis of Ole Miss on Wednesday.

Peyton Stovall, Cayden Wallace and Michael Turner were retired in order by Gaddis on Wednesday, stranding Webb at second base and breaking the streak of first-inning runs in Omaha for the Razorbacks.

Oklahoma catcher Jimmy Crooks has been just as valuable with his defense as with his bat, which has provided three-run homers in wins over Texas A&M at the CWS. Crooks hit a first inning three-run shot off Texas A&M lefty Ryan Prager to spark the Sooners' 5-1 win on Wednesday.

"I've had guys in the past that were really good at that, and we work really hard on that as a staff to teach that."

Oklahoma right-hander David Sandlin had a much better second appearance in Omaha than his first as the Sooners eliminated Texas A&M on Wednesday.

Sandlin handcuffed Texas A&M by limiting the Aggies to 1 run on 5 hits and a walk in 7 innings of the Sooners' 5-1 win.

In Oklahoma's 13-8 win over the Aggies on Friday, Sandlin managed to record one out, but he allowed 4 earned runs on 2 hits a walk and a hit batsman as he was doing it.

Sandlin said the experience of pitching last week was valuable if not successful.

"It just got me ready for the atmosphere I was going to be in and mentally prepare almost more for this game and trust everything I had," Sandlin said. "I think I tried a little too hard, and as Coach [Skip] Johnson says, you can't do that. You don't want to get geared up when I don't need to be."

The treat comes after his daily workout, and the size of his shake could be described as small.

Yurachek said he has made the shake a daily part of his routine during the Razorbacks' appearance.

None of the first 11 games at the College World Series were decided by less than four runs, though six were settled by exactly four runs, including three by a 5-1 count, including Oklahoma's win on Wednesday that eliminated Texas A&M.

The scoring margin in the first 11 games was 66 runs, exactly 6 runs per game.

Graham had four hits and two stolen bases in Sunday's 6-2 winner's bracket victory over Notre Dame.The last player to accomplish the feat had been Barry Bonds of Arizona State in 1984.