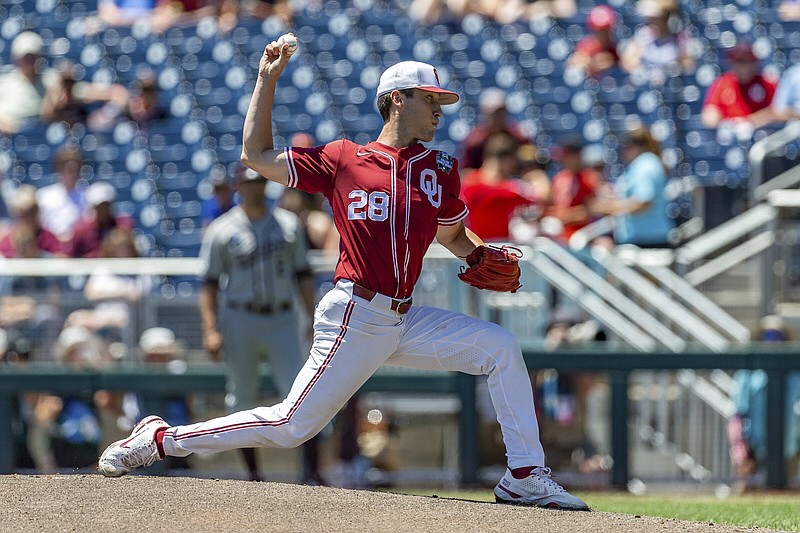 OMAHA, Neb. — Oklahoma’s baseball players came to the College World Series calling themselves “a bunch of Davids,” a nod to their embrace of the underdog identity they adopted after an underwhelming start to the season.

It was one David — David Sandlin — who got most of the credit Wednesday for taking down Texas A&M, the last of the national seeds in the NCAA Tournament.

Sandlin held the Aggies to one run and struck out a career-high 12 in seven innings, Jimmy Crooks’ three-run home run in the first held up and Oklahoma advanced to the CWS finals with a 5-1 victory.

Trying to complete a softball-baseball title sweep, the Sooners (45-22) have won three consecutive games at Charles Schwab Field by no fewer than four runs and will play for their first national championship since 1994.

Their opponent in the best-of-three finals starting Saturday will be either Arkansas or Mississippi.

Closer Trevin Michael struck out Brett Minnich to end the game against the Aggies. The celebration was subdued.

“I think those kids are focused,” Coach Skip Johnson said. “I don’t know if it’s dog-piling or whatever it is… It’s kind of weird sometimes. I don’t tell them not to dog-pile, I can tell you that.” Texas A&M (44-20) finished 2-2 in the CWS under first-year Coach Jim Schlossnagle after going 29-27, winning only nine SEC games and not even qualifying for the league tournament in 2021.