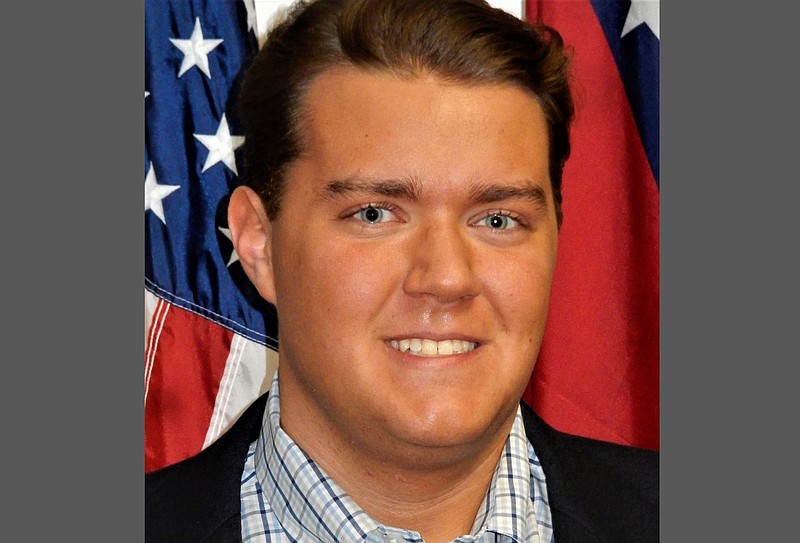 HOT SPRINGS -- Dayton Myers voted for the first time earlier this year, going to the polls for the Feb. 8 special election reauthorizing the countywide 0.625% sales tax.

He wanted to vote in the November 2020 general election, but he didn't turn 18 until the following March.

By way of his win in Tuesday's Republican primary runoff for District 7 justice of the peace, he'll go from first-time voter to elected officeholder in the span of less than a year. He's unopposed in the November general election.

Myers, 19, will still be a teenager when he takes the oath in January. He may be the first teenager to hold elected office in the county. The Garland County Historical Society's search didn't turn up any other teenage officeholders.

The real estate broker finished second in the May 24 primary to District 7 JP John Paul Faulkner, who fell 40 votes short of the 533 he needed for the majority in the three-way race. According to the unofficial tally from Tuesday's runoff, Myers won 118 of the 158 votes cast. Fewer than 3% of the district's more than 5,400 registered voters went to the polls.

He wore out a lot of shoe leather canvassing the southeast Garland County district that reaches north from the Hot Spring County line to lakes Hamilton and Catherine.

"We did a lot of door-knocking," Myers said. "A lot of people liked the fact I was out there trying to make a personal connection with them. Those were the comments I got from a lot of people at the polling places."

The Republican Party of Garland County said Faulkner, a seven-term incumbent who works for the city of Hot Springs' street department, is the longest-serving Republican on the quorum court.

"Government starts at the local level," he said. "I feel like what's going on in Washington, D.C., is not how I want the country to be going. I wanted to get involved on the local level. While there's not a whole lot of controversial decisions the quorum court makes, it's still a very important part of our structure of government in the United States."

Myers' interest in government and politics makes him an outlier among his peers, as 18-to-24-year-olds cast fewer than 2% of the 14,204 ballots in last month's primaries.

"I am running for office because I see what's going on in the country and statewide," Myers said. "There's been people serving in office for long periods of time who are not doing a very good job, in my opinion."

Myers was reluctant to specify his age at candidate forums county Republicans held in advance of the primary, but his youth intrigued voters who wanted change.

"They liked the fact a young person like myself was wanting to get involved in politics," he said. "They see the president, who's 79 years old and been in politics for 50 years. They don't like the job he's doing. They think some young blood is needed to bring some different views and ideas. Sometimes you need younger people to bring some energy to the table and spark some new ideas."