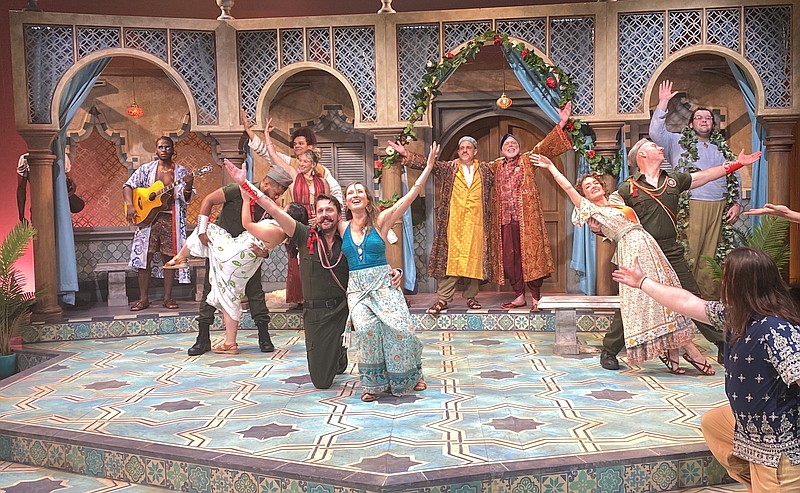 Steven Marzolf as Benedick and Elizabeth “Betsy” Jilka as Beatrice (center) lead the final pose in the finale, "The Games of Love," in the Arkansas Shakespeare Theatre’s production of William Shakespeare’s “Much Ado About Nothing.” (Special to the Democrat-Gazette/Chad Bradford)

The summer festival has this year partnered with the University of Arkansas, Fayetteville, to produce just the one show as it returns after canceling its 2020 and 2021 seasons because of covid-19. It opens June 30 after a three-show run at Fayetteville’s Global Campus Black Box Theatre earlier this month. This weekend’s performances were canceled late Wednesday.

"There are a lot of professional companies attached to an education company," she explains, and UA has a graduate theater program that UCA lacks.

Pairing with another institution makes it possible to share resources and talents, particularly important because the Shakespeare Theatre has been out of commission for two years and its management has departed for other pastures.

"We dipped our toes in it this year, and we'll see if it worked for us or it didn't work for us," Meador says.

"Much Ado About Nothing" focuses on two love stories, neither of them entirely straightforward. A Spanish prince, Don Pedro (Indianapolis-based actor Scott Russell) and his officers, including Claudio (UA grad student Jordan Williams) and Benedick (Marzolf), accept post-battle hospitality from wealthy Leonato (Memphis actor Bill "Clark" Rogers), where Benedick has been a frequent guest and where he regularly indulges in verbal sparring with Leonato's tart-tongued niece, Beatrice (Jilka).

Things teeter on the knife's edge of potential tragedy until the town's night watch, headed by the inimitable, self-important but ridiculously inept Dogberry (Fritzges), stumbles upon the conspiracy. After a few complicated machinations, all turns out well, including the weddings of Claudio and Hero — and Beatrice and Benedick.

"He's an interesting dude, to be sure," Marzolf says of his character. "He's incredibly witty and smart; the fun of discovering him is finding his playfulness."

Marzolf compares Benedick to some of Shakespeare's clown characters, noting he has moments that recall Touchstone from "As You Like It" in Benedick's irreverent feelings toward marriage.

Marzolf diagnoses Benedick's reluctance to marry as "all based out of fear." "He's actually in love with Beatrice from the first, but he's just afraid," he explains, in part, because she handles him so well.

"They're sparring, in the opening scene between them, and Benedick has to bail out ... because he can't keep up with her.

"This is one of my favorite Shakespeare plays; it's at the top of my list because of the beautiful balance and the rom-com elements. The subsidiary characters are smart and fleshed out very well."

Well, smart with the exception, he concedes, of Dogberry and the Watch, whom Shakespeare deliberately makes "the antithesis of smart." The irony, he says, is that "they're the ones that catch the bad guys amid their bumblings and malapropisms."

What strikes him most, he says, is that in Act IV, two-thirds of the way through the play, "tonally it totally changes — it approaches near tragedy; the roller coaster it takes the audience on. Don John is a sociopath; he's vicious. But things turn out right and they all live happily ever after."

"This is the first really large role like this in Shakespeare that I've taken on," Jilka says. "It's a chance to challenge myself."

Beatrice, she says, "has similarities to myself in her stubbornness; she's more clever and witty than I am. There are so many different facets to her personality."

Doing actual classical theater is also a challenge, she adds.

"I was trained classically, sort of, but I leaned more toward musical theater and contemporary acting." And her musical theater training does come into play here: The production contains musical elements, courtesy of composer Chad Bradford, who set the entire normally spoken prologue to music.

"That's such a great way of capturing the audience from the beginning," Jilka says. 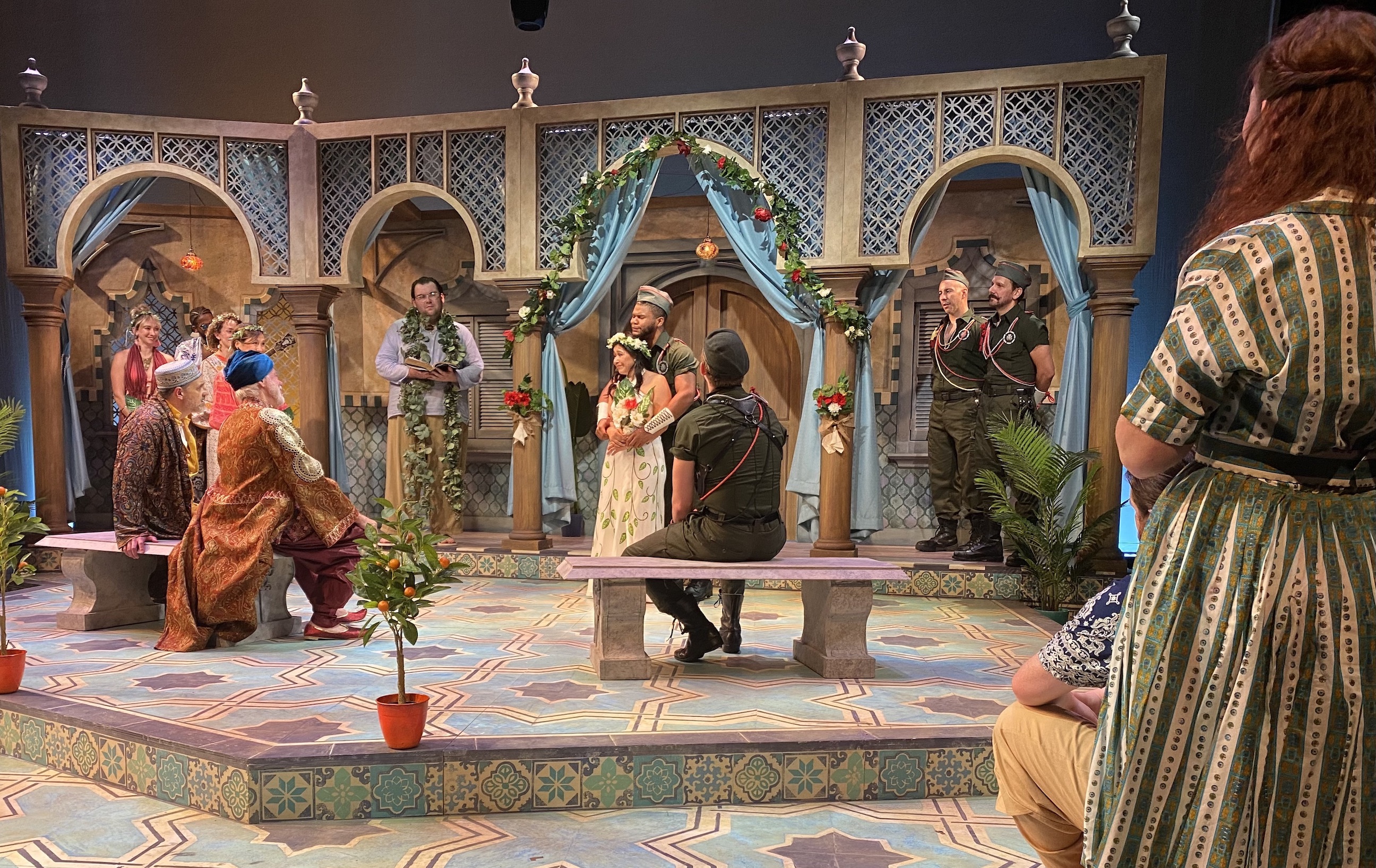 The wedding of Claudio (Jordan Williams) and Hero (Audrey Romero) is the focal point of a substantial change in the tone of Shakespeare's play. The proximity of Messina, Sicily, where Shakespeare sets “Much Ado About Nothing,” to North Africa is reflected in the sets and costumes. (Special to the Democrat-Gazette/Chad Bradford)  'CULTURAL CROSSROADS'

"I'm excited for audiences to see this," says Pendergraft, who notes she has had a bit of a challenge reshaping her staging from the space in Fayetteville, which featured a small thrust stage (with the audience on three sides), to the proscenium-framed stage at UCA.

She stressed the location and history of Shakespeare's setting, the Sicilian port city of Messina, which, she notes is a cultural crossroads, "as close to North Africa as it is to mainland Italy." Its history goes back at least as far as Homer, who in "The Odyssey" sends Odysseus' ship through the Strait of Messina between the mythical monsters Scylla and Charybdis.

The influences of Italy, Spain and North Africa show up in the costumes and sets, the fruit of working with student designers, with faculty and professional mentors.

"It's a lush, lush production," she says. "I want it to feel beautiful."

Meador says the collaboration with the university in Fayetteville will likely continue, but after this year's production closes there will be a long look at the future of the festival, which had to retool after two years off and a near complete turnover in personnel.

On top of that, for the the 2023 season, the Shakespeare Theatre will move its headquarters and performance space to the university's new Windgate Center for the Fine and Performing Arts, and into what Meador says will be "a state-of-the-art black box theater."

"We're finally going to have a space built to have that intimate feeling" that the organizers were trying to achieve in the festival's latter, pre-pandemic years, when staging productions with the audience on stage instead of in the Reynolds Center seats, she adds.

Other future considerations include resurrecting a youth company, which has been part of the Shakespeare Theatre's educational mission, and widening the casting to, as Meador puts it, "showcase more Arkansas talent." Much depends, she says, on increasing fundraising, which in the wake of the pandemic, is "close to where we were in the beginning" when the operation debuted in 2007.

‘Much Ado About Nothing’