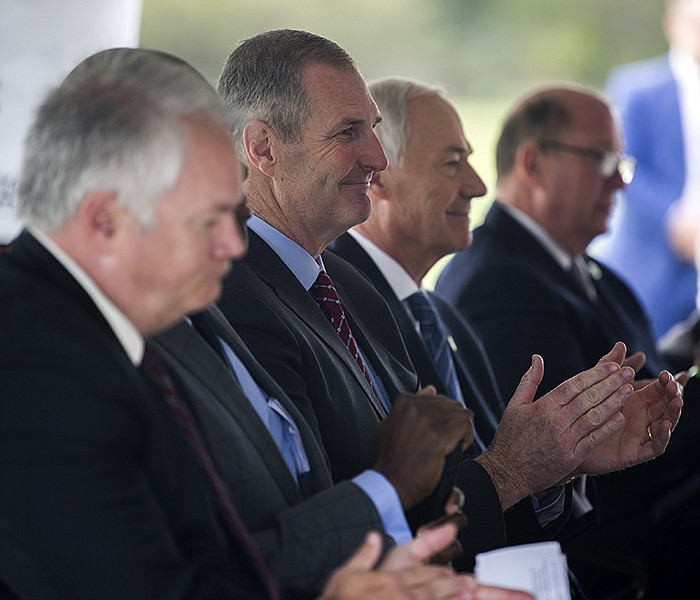 Trex CEO Bryan Fairbanks sits among local officials including Mayor Frank Scott, Jr. and Governor Hutchinson during an announcement of a new factory that will be built in the Port of Little Rock on Tuesday, Oct. 26, 2021. The new factory will bring 500 jobs and an estimated $400 million over the next five years in the development of the new Arkansas site, according to a press release. See more photos at arkansasonline.com/1027port/ (Arkansas Democrat-Gazette/Stephen Swofford)

Trex Co., preparing for its entry in the Arkansas market, has reached an agreement with a longtime Van Buren recycling company to supply materials for the decking manufacturing operation when it begins production in January 2024.

Arkansas Poly & Printing (AP&P) will provide Trex with more than 1.2 million pounds a year of scrap plastic to feed the manufacturer's Little Rock plant, which will produce decking and other composite outdoor products.

The companies said Wednesday the agreement will increase sustainability efforts for both manufacturers in the state and reinforce Trex's commitment to supporting Arkansas-based suppliers.

"When we bought the company, we wanted to make sustainability a focus," she said Wednesday. "Instead of putting our scrap in a landfill, we wanted to partner with somebody who could convert it to something else. All of our scrap from our production runs ... will ultimately go from Van Buren to Little Rock and Trex will use it to make outdoor products. This really made an excellent fit for us."

Trex, which has manufacturing operations in Virginia and Nevada, is scheduled to create more than 500 new jobs at the facility it is building on a 289-acre site at the Port of Little Rock.

"When we move to Little Rock we'll have a supply that's basically right there," Stephanie Hicks, materials sourcing manager for Trex, said Wednesday. "It's going to be a huge asset to have suppliers coming out of the Midwest and in Arkansas to be able to supply our plant."

Diebold and partner Trent Goins purchased AP&P in February 2021 saying they were committed to enhancing sustainability efforts and working with other Arkansas companies where possible. The company, which was founded 50 years ago to produce polyethylene bags for the poultry industry, uses a production process that includes manufacturing plastic film, printing on the film and converting it to bags and wrapping.

"That really makes us unique," Diebold said. "There aren't many firms in the country that are three-way vertically integrated. That allows us a much greater control of quality and reduces the carbon footprint."

"I like to say we package everyday life," Diebold said, noting the company provides plastic film wrapping for nearly 50 industries with products ranging from paper towels to toilet paper to pet food and office supplies. "We manufacture the flexible packaging that goes on those items."

A byproduct of the company's production process is creation of scrap plastic, which today is bundled and shipped to a Trex plant in Virginia. Once the Little Rock plant opens, sustainability efforts will receive a boost by further reducing the carbon footprint required to send the scrap plastic to the East Coast.

The company's Little Rock plant will include a focus on decking and railing production, warehousing, reclaimed wood storage, and plastic film recycling and processing. The new polyethylene processing facility will enable the company to collect and process even more plastic waste, company officials said.

"Commercial partners like Arkansas Poly are essential to Trex's sourcing efforts," Zach Lauer, supply chain vice president for Trex, said in a new release announcing the partnership. "We are excited to join forces with a company that shares our vision of driving recycling for plastic films and pleased to be establishing meaningful connections with our new neighbors in Arkansas."

CORRECTION: Trent Goins is co-owner of Arkansas Poly & Printing. An earlier version of this story gave an incorrect first name.