Arkansas adds 1,434 covid cases, the most in a single day in 4 months 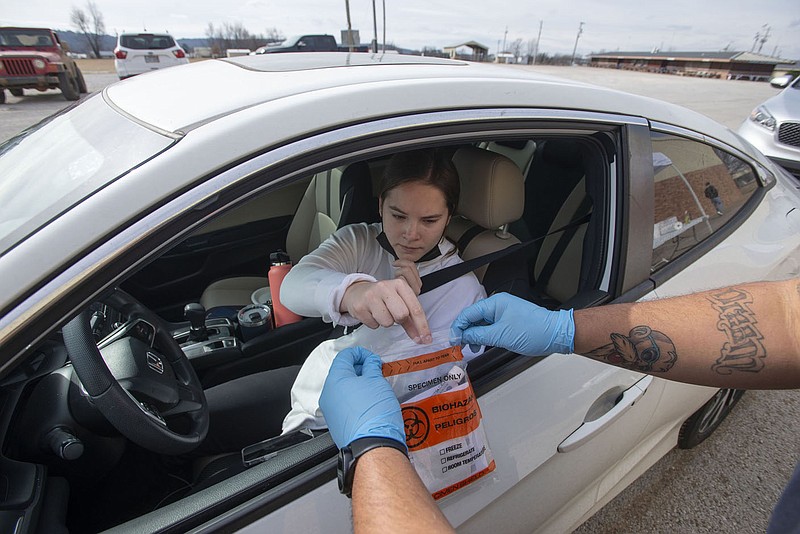 Lily Douglas of Fayetteville turns in a swab to get tested for the coronavirus that causes covid-19 at the Washington County Fairgrounds in Fayetteville in this Feb. 1, 2022, file photo. (NWA Democrat-Gazette/J.T. Wampler)

Arkansas' count of coronavirus cases rose Thursday by 1,434 -- the largest daily increase since February and pushing the state's active case total above 9,000 for the first time since then.

Growing for the second day in a row, the number of people hospitalized in the state with covid-19 rose Thursday by three, to 196, still short of the recent high of 199 that the number reached on June 15.

The state's death toll from the virus, as listed on the Arkansas Department of Health's online coronavirus dashboard, rose by seven, to 11,559.

Health Department Director Dr. Jennifer Dillaha said two of the seven were the child deaths that the department had recently confirmed as being related to covid-19, bringing the state's death toll among children to nine.

She said the seven deaths reported Thursday, including the two child deaths, all happened more than a month ago. Two occurred in January, two were from February and three were from April, she said.

She declined to provide further details about the child deaths.

Coming after a few days in which the state's daily case increases were either down or only slightly up from a week earlier, the rise in cases on Thursday was the largest in a single day since Feb. 15, during the state's first wave of infections from the omicron variant.

Previously, the only daily increase since March that had been above triple digits was the exactly 1,000 cases that were added to the state's count a week before Thursday, on June 16.

Dillaha said the latest increase appeared to be the continuation of an upward trend most recently fueled by the omicron subvariants known as BA.4 and BA.5.

But she called it a "good sign" that the number hospitalized hasn't risen to the same degree that the state's new case numbers have.

"I think it means that a lot of people have at least partial immunity," either through vaccination or a previous infection, "which is going to help people overall," Dillaha said.

After dipping a day earlier, the average daily increase in the state's case count over a rolling seven-day period rose Thursday to 761, its highest level since the week ending Feb. 24.

With new cases outpacing recoveries, the number of cases in the state that were considered active rose by 766, to 9,234, the largest total since Feb. 21.

It was the largest one-day jump in active cases since Jan. 22.

Dropping for the second day in a row, the number of the state's virus patients who were on ventilators fell by one, to 10.

After falling by nine a day earlier, the number who were in intensive care remained for a second day at 32.

Meanwhile, Dillaha said the final shipments from the state's second "wave" of deliveries of covid-19 vaccines for children as young as 6 months old arrived in the state on Wednesday.

The first wave, consisting of 15,000 doses each of the Pfizer and Moderna vaccines, arrived Monday at nine of the Health Department's local health units. Those doses were being distributed to other local health units around the state as well as to private clinics and pharmacies.

The second wave included 2,000 doses of the Pfizer vaccine that the Health Department planned to redistribute around the state as needed.

It also included 800 doses of Pfizer and 300 doses of Moderna that were to be shipped directly to health care providers.

On Tuesday, it ordered 100 doses of Moderna that will go to the Howard County local health unit in Nashville.

Dillaha didn't have expected delivery dates for the orders placed Monday and Tuesday.

The U.S. Food and Drug Administration on June 17 authorized the Pfizer vaccine for children from 6 months to 4 years of age and the Moderna vaccine for ages 6 months to 5 years.

The University of Arkansas for Medical Sciences has requested 100 doses each of the Moderna and Pfizer vaccines and expects to get its first doses this week or next week, spokeswoman Andrea Peel said.

She said UAMS plans to offer vaccines for the new age group to "pre-existing patients" at its family medicine clinics across the state.

CHI St. Vincent, which plans to offer the vaccines through its pediatric health care providers, expects to receive its first doses "any day now," a spokesman said Thursday.

Baptist Health plans to offer the vaccine in its clinics "that currently provide other immunizations for children in that age group," spokeswoman Cara Wade said in an email earlier this week.

Asked when it expects to receive its first doses, she reiterated Thursday that the health system anticipates "hearing more about vaccine distribution from the Arkansas Department of Health."

According to data updated Thursday on the U.S. Centers for Disease Control and Prevention's website, 67.3% of Arkansans of all ages had received at least one vaccine dose as of Wednesday, and 55% were fully vaccinated.

Of those who were fully vaccinated, 40.6% had received a booster dose.

Also on Thursday, the number of Arkansas counties where residents are advised to wear masks in indoor places grew from one to three under the latest update to a CDC map.

Based on their weekly number of new cases, covid-19 hospital admissions or a combination of both, the "covid-19 community level" in Baxter, Ashley and Chicot counties was listed as "high" under the update on Thursday.

The previous update a week earlier had listed the level as "medium" in Ashley and Chicot counties and "low" in Baxter County.

Meanwhile, the level in Phillips County, which had been listed as high, fell to low on Thursday after the number of new cases and admissions in the county dropped.

The map update also showed the covid-19 level rising from low to medium in 13 Arkansas counties and falling from medium to low in seven others.

Overall, the number of medium-level counties rose by four, to 18, while the number listed as low fell by six, to 54.

Among the state's most populous counties, the level was listed as medium in Pulaski, Faulkner and Craighead counties and low in Benton, Washington, Sebastian and Saline counties.