OPINION | REVIEW: Colonel Tom Parker ‘made’ Elvis, but never quite got him 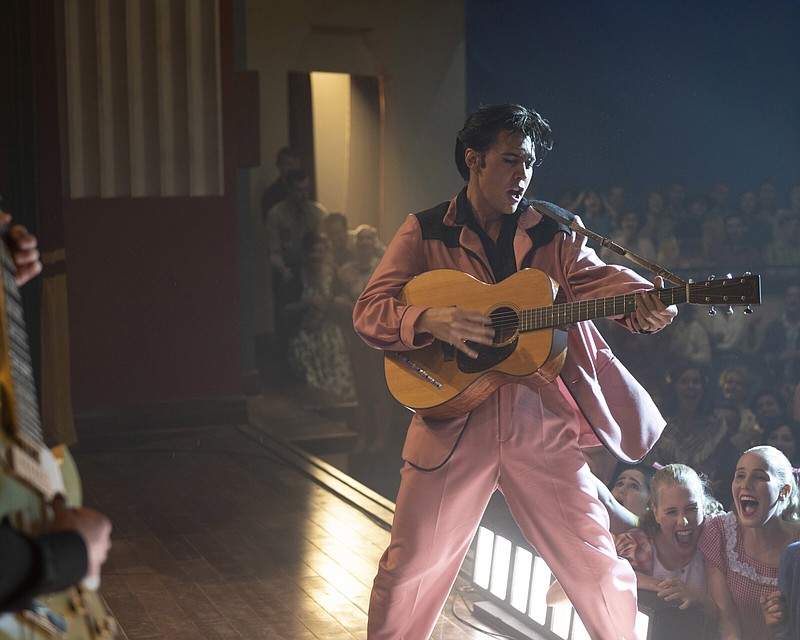 He was the one: the young Elvis Presley (Austin Butler) gives the people what they want in Baz Luhrmann’s sumptuous, over-the-top bio-pic “Elvis.”

Early on in Baz Luhrmann's bio-pic-fantasia "Elvis," we learn that the young King, growing up dirt poor outside of Memphis, was a huge fan of the Captain Marvel comics. Seems suitable, given this early series (no relation to Marvel's version) depicted a boy who could utter a magic word and turn into a superhero.

As Luhrmann depicts him, Elvis (Austin Butler) was himself, perennially this young boy with seeming super powers, while always in need of parenting and guidance from adults. First, from his beloved ma (here played by Helen Thomson), and later, from the coiling tentacles of one Colonel Tom Parker (Tom Hanks), an undocumented immigrant from the Netherlands, who got his hooks into the burgeoning teen star early, signed him to a ludicrous contract in which he received 50% of Elvis' earnings, and kept riding his show pony into the ground the rest of Elvis' erratic career.

The film is constructed as a retrospect through the memory of a deeply flawed and self-serving narrator, the now aged and ailing Parker, who tells the story of how he found Elvis and managed him to glory -- but "constructed" is a bit too confining a term for how the film plays out. Especially in its breathless first act, it comes at you from all angles and time frames: We have a young Elvis about to take the stage at a small country show for the first time, cut back and forth with later versions of him, Vegas marquees, and seminal moments from his childhood, the lone white boy living in a Black neighborhood, captivated by the old time blues and gospel singers of the day.

From these near-exhausting digressions -- Luhrmann's film begins like an anxiously addled meth head trying to sell a story under police interrogation, all asides and cloudy details, and changes of pace -- the film begins to assemble the parts of Elvis' life it deems most significant. Much of this material, in a distinctly sanitized version (especially when it comes to his romance with a then 14-year-old Priscilla), comes from the already on-the-record stuff that was already known about the man's career trajectory -- rebellious teen idol in the mid-'50s; off to serve his country in Korea on a two-year military stint; back to the states for a series of shoddy Hollywood musicals; career on the skids before a comeback TV special in 1968 that propelled him back into superstardom; and then, a final few years in Vegas, doing pumped up big-band shows, and getting more and more strung out on drugs until it finally killed him as a 42-year-old -- but, through the lens of Parker's pernicious manipulations, we come to view Elvis as a tragic figure, betrayed by the man he most trusted, and forced to live out his days in the glittery gilded cage of a high-roller hotel suite, his wings clipped by his manager, who, having no passport of his own, refused to ever let Elvis out to tour internationally.

From that perspective, the shy, God-fearing, mama-loving boy was never quite lost with Elvis, even as he waddled around the casinos, and his Graceland mansion, further and further out of touch with his core self, all the while, his conniving manager taking his golden goose for all it's worth, even after condemning it to, as Elvis puts it toward the end, the "salt mines" of showbiz.

For what it's worth, I've never been a fan of Luhrmann, all gloss and sheen, a bit like a more musically inclined Michael Bay, who used a bombastic storytelling style to help mask the lack of substance underneath. But, here, with a subject whose style more or less sets the tone for Luhrmann-like theatrical excess, it does seem like a good match of subject and director. Elvis, ever the showman (or, as Parker puts it, "snowman" a term from his carny days indicating a performer able to trick the marks into giving up all their money), knew how to connect with his audience, from the pelvis-grinding early days, to the sweeping theatricality, and full-body leathers of his stints on the Strip.

Luhrmann takes pains to show us what he believes was Elvis' core self -- his devotion to his mother, his legit adoration of gospel and blues, and the love for his young daughter, Lisa Marie. In one early scene, after Parker has insisted he take the shimmy and sex out of his performances to appease the riled up conservatives, who are terrified of what forces he's releasing in their children's libido, Elvis goes back to his roots, and heads down Beale Street in Memphis. There, he meets up with his good friend B.B. King (Kelvin Harrison Jr.) at a tiny upstairs club, for a night of down-home, earthy blues, as performed by Little Richard (Alton Mason), whose high-wire, strip-and-grind theatrics put Elvis' more modest efforts to shame. When Elvis next performs on stage, he ignores his manager's advice, and doubles down on the hip-twitching, sex-oozing act, which earns him significant legal jeopardy for a time.

The result of this reinterpretation does take a lot of Elvis' worst and lamest career pratfalls -- the cheesy Hollywood flicks; the mountain of awful merchandising; the endless stint as a Vegas crooner -- and puts them squarely on the shoulders of Parker, ever the huckster, steering his lone client into one hellacious performing purgatory after another to maximize his own fat wallet.

As relative newcomer Butler plays him, Elvis is a sweet manchild, who just wants to do right by the people he sees as relying on him (which is, under Parker's purview, literally everyone in his entourage, including his weak-willed father, played by Richard Roxburgh), trying to keep everyone happy at his own (literal) expense, both monetarily and otherwise. Hanks, meanwhile, playing a role I suspect he must have harbored for a long while, plays Parker with a prevailing mist of manipulation and self-aggrandizement. He frequently calls out, Salieri-like, who really killed Elvis, granting himself absolution and condemning the audience instead, admonishing us for the attention and love we showered upon his client, making it so Elvis couldn't receive any other form of love than that of an adoring audience.

The result of all this is something of a mess, filmwise, a hodgepodge of greatest hits, emotional swoons, and psychological overreach, but something of that over-the-top style actually works to help explain how such a devout, modest little kid growing up dirt-poor in the south, could become the most famous entertainer in the world.

He died before he could become explicable, which leaves at least part of his legend intact. Midway through the film, as Elvis plans his comeback TV special with a pair of younger producers, he talks about how much he wanted to be an actor like James Dean, someone so talented, beautiful, and tragic, he would become indelible.

It becomes clear, in his mind, in this, he failed. While it's true his Hollywood experience was eminently forgettable, in his life and death he became an icon several times over anyway, and it's possible Luhrmann's adoring film will help re-establish some of what made him such a powerful draw in the first place. 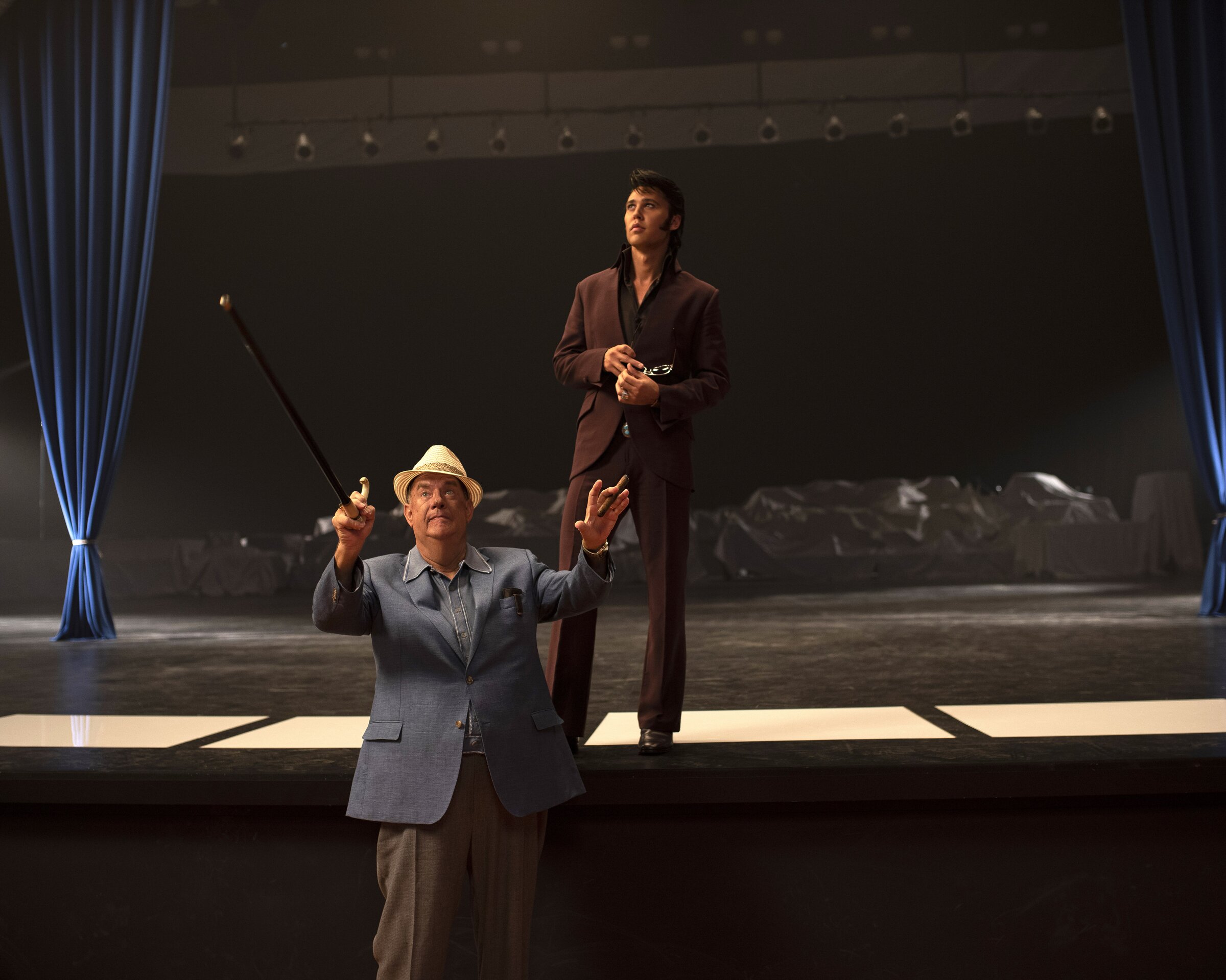 Print Headline: Requiem for a heavyweight