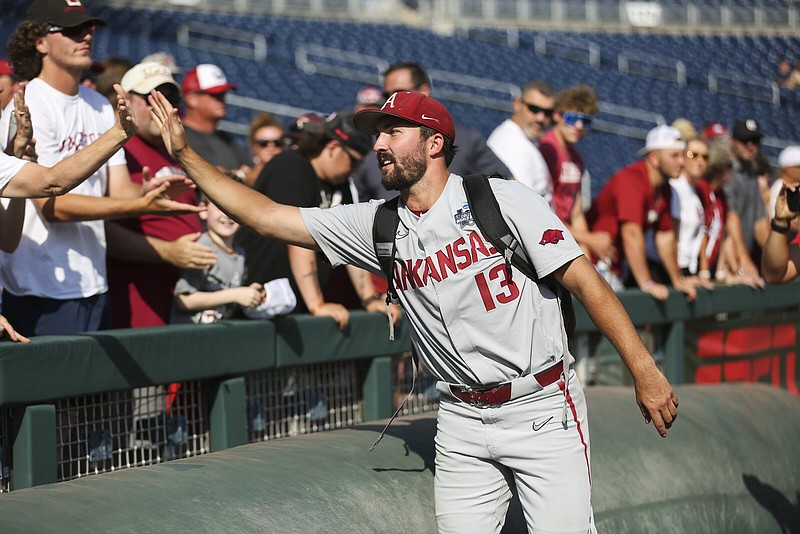 OMAHA, Neb. -- His stats weren't as gaudy, but by the end of the 2022 season Connor Noland pitched as well as the Arkansas aces who preceded him.

Noland was dominant in NCAA postseason starts against Grand Canyon, North Carolina, Stanford and Ole Miss. He allowed 5 runs in 291/3 innings for an ERA of 1.53, and allowed 25 hits and 5 walks for a WHIP of 1.02.

Those stats don't include a blown save at Oklahoma State on June 5, when Noland was uncharacteristically used for the only time this season out of the bullpen, two days following a start.

"He was amazing," Arkansas Coach Dave Van Horn said of Noland's postseason. "He was a strike-thrower, plus breaking ball, location was outstanding, good movement on his fastball with sink. He got his second wind the last three, four, five weeks and pitched as good as he did at the beginning of the season."

In what was likely to be his final time in a Razorback uniform, Noland delivered one of the best starts of his career during a season-ending loss to Ole Miss on Thursday at the College World Series. Pitching on short rest, the junior right-hander from Greenwood allowed 2 runs on 7 hits and did not walk a batter during his 8-inning, 84-pitch start. He threw 58 pitches (69%) for strikes.

Unfortunately for Noland and his Arkansas teammates, Ole Miss starter Dylan DeLucia pitched better and shut out the Razorbacks to send the Rebels to the national championship series against Oklahoma with a 2-0 victory.

"It was a great pitchers duel," Van Horn said. "It's one of the better ones that I've seen up here, that's for sure."

Noland faced the minimum and threw 34 pitches through three innings against the Rebels. The only runs he allowed came when Ole Miss put leadoff runners on base with singles in the fourth and seventh innings.

The eight-inning start tied for Noland's longest of his career. He also pitched eight innings against the Rebels on April 29 at Baum-Walker Stadium in Fayetteville, but was less effective that night when he allowed 4 runs, 11 hits and 4 walks in a 4-2 loss. DeLucia started opposite of Noland during the regular-season game and pitched seven innings.

Noland's start Thursday came five days after he threw 79 pitches in 72/3 innings during a 17-2 victory over Stanford in Omaha. The five-day turnaround was the shortest between starts this season for Noland, whose previous short turnaround was six days before starts against Illinois-Chicago on March 10 and Florida on April 7.

"He's been a great leader for us all year and has been a huge role in our success."

Noland earned freshman all-America honors in 2019 despite spending most of the baseball offseason playing quarterback on the Razorbacks' football team. He appeared to be on his way to becoming Arkansas' ace before the 2020 season was canceled due to the covid-19 outbreak, and missed nearly two months with a forearm injury last season that kept him from ever pitching at full health.

With No. 1 starter Patrick Wicklander and 2021 Golden Spikes Award-winning closer Kevin Kopps gone from last season's team, and projected No. 1 starter Peyton Pallette lost during the preseason to Tommy John surgery, Noland performed well in the role of the Razorbacks' go-to pitcher. Having changed his body with added muscle during the offseason, he was able to withstand longer outings and recovered better between starts.

He had a no-decision against Illinois State during a rare Opening Day loss in February, but pitched well -- even great at times -- for the next several weeks. Between Feb. 25 and April 14, the Razorbacks won eight of nine games that he started, including their first five series openers in SEC play. He also fielded his position well and earned All-SEC defensive team honors. He was a finalist for the Division I Gold Glove Award as pitcher.

Noland said he was "super proud" of his season and the way he bounced back for the most important stretch. His postseason run came on the heels of a disappointing end to the regular season when he failed to pitch more than five innings in consecutive starts against Auburn, Vanderbilt, Alabama and Florida at the SEC Tournament.

"Just to make it to Omaha is a tough feat," Noland said. "I think for myself, I just want to be a leader. My freshman year, [pitcher] Isaiah Campbell was a big role model for me, and I got to see him lead that team.

"So I just hope that the players here, they think the same, that I was a good leader, a good person, taught them about the game. That's really the most important thing."

Asked how Noland's season compared to past aces like Campbell, Wicklander and Blaine Knight, Van Horn said it was "right there." He finished the season 8-6 with a 3.65 ERA in 116 innings.

"He got eight wins and, yeah, he had a few losses in there, but in the losses it was a lot of times we just didn't score," Van Horn said. "He ate up a lot of innings for us and he helped us win [regular-season games] on Saturday and Sunday because of what he did on Fridays."