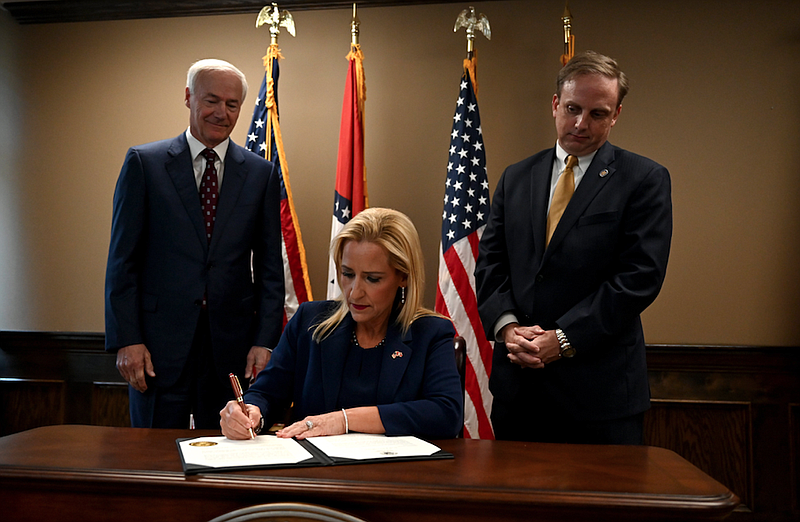 Arkansas Attorney General Leslie Rutledge on Friday afternoon implemented a 2019 law that bans abortions in Arkansas, except to save the life of the mother in a medical emergency, after the U.S. Supreme Court earlier in the day overturned the landmark 1973 ruling that legalized abortion across the country.

The Republican attorney general, who was flanked by Gov. Asa Hutchinson, certified that the U.S. Supreme Court overturned the 1973 Roe v. Wade ruling in accordance with Act 180 of 2019. This in turn certified Arkansas's Trigger Abortion law.

“None of us thought today would come in our lifetimes,” Rutledge said to a crowd of media members and politicians. “Roe was wrong on that day and it has been wrong everyday since.”

Hutchinson called the decision a turning point for the nation.

“The [Supreme] Court returned the issue of abortion to the states,” Hutchinson said. “Since Roe vs Wade was decided, the states that desired to protect unborn life had been prohibited from doing so.”

The 2019 law bars a person from purposely performing or attempting to perform an abortion except to save the life of pregnancy woman in a medical emergency. The law that was codified doesn’t include an exception for rape and incest.

“As Governor I am gratified by the Court's decision because the people of Arkansas have declared a public policy of this state is to protect the life of the unborn,” he said.

Hutchinson said the law will be enforced by the Department of Health and punishment will be focused on abortion providers not the women who seek it.

“I will be directing the Arkansas Department of Health to enforce the law and to conduct the necessary inspections and certifications to ensure any abortion provider is in compliance with the law and understands and the penalties that are provided wherein,” he said. “Let me also emphasize this doesn’t put at risk access to contraceptives or other issues that are tangentially related.”

The U.S. Supreme Court on Friday ended constitutional protections for abortion in a decision by its conservative majority to overturn Roe v. Wade. Friday's outcome is expected to lead to abortion bans in roughly half the states, including in Arkansas.

Arkansas already had a “trigger law” that states if Roe and a related court case called Planned Parenthood v. Casey were ever overturned, abortions would become illegal except in instances to save a pregnant person’s life.

Act 180 of 2019 defines abortion as “the act of using, prescribing, administering, procuring or selling of any intrument, medicine, drug or any other substance, device or means with the purpose to terminate the pregnancy of a woman, with knowledge that the termination by any of those means will with reasonable likelihood cause the death of the unborn child.” Under this law, an act is not an abortion if the act is performed with the purposes to save the life or health of the unborn child, remove a dead unborn child caused by spontaneous aborton or to remove an actopic pregnancy.

Performing or attempting to perform an abortion is an unclassified felony with a fine not to exceed $100,000 or imprisonment not to exceed 10 years or both under Act 180.

Arkansas Attorney General Leslie Rutledge on Friday afternoon certified the state's abortion "trigger law," immediately outlawing all abortions in the state except to save the life of the mother.