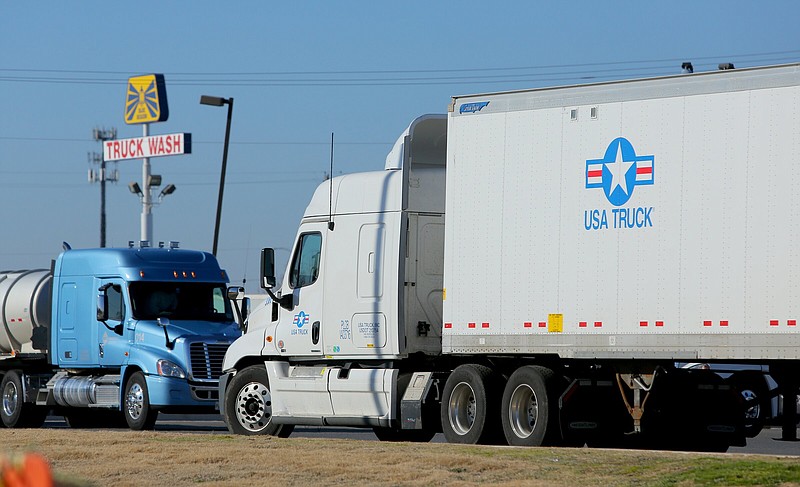 Van Buren-based USA Truck is being acquired by a German logistics company in a deal valued at $435 million, according to a joint statement by the companies released Friday.

The acquisition by DB Schenker of Essen, Germany includes the purchase of all outstanding shares of USA Truck common stock at $31.72 in cash. The $435 million value of the deal includes assumed cash and debt.

The acquisition was unanimously approved by the USA Truck Board of Directors and is subject to regulatory approval and a vote from USA Truck's shareholders. The companies said the intent is to take USA private after the deal is complete, estimated as sometime near the end of this year.

DB Schenker said it intends to expand the reach of USA Truck in the United States and Mexico.

"USA Truck is the perfect match for DB Schenker's strategic ambition to expand our network in North America and foster our position as a leading global logistics provider," Jochen Thewes, chief executive officer of DB Schenker, said in a statement.

USA Truck, a trucking and logistics company which operates in the United States, Mexico and Canada was founded in 1983 and has a fleet of about 1,900 trucks and employs about 2,100. It has more than 36,000 active contract carriers and a network of terminals in the eastern half of the United States, the company said.

Marc Scott an assistant professor in the supply chain management department at the Sam M. Walton College of Business at the University of Arkansas at Fayetteville said DB Schenker and its parent company, are global players in the logistics and transportation space, noting the company has been aggressively expanding recently through mergers and acquisitions.

He said DB Schenker clearly believes the USA Truck network brings value to its expansion plans -- something Scott agrees with.

"I think they got a great deal," Scott said.

He said acquisitions in the logistics and trucking industry have been gaining steam over the past five years and even more so over the last three, in particular amongst big players in the sector. Scott said large logistics companies are working to create "end-to-end" networks that are less vulnerable to the supply chain snags that have developed in recent years.

DB Schenker is a wholly owned subsidiary of Deutsche Bahn, a worldwide logistics company, which provides land, air and ocean transportation services, according to the company. It employs more than 76,000 in 130 countries. In the U.S. DB Schenker employs more than 10,000 in 123 locations.

"This transaction provides immediate and significant value for USA Truck stockholders, offers broadened career opportunities for our employees and increased capacity and service offerings with which to support our customers, and better positions [for] our company to realize our long-term vision to become the premier North American transportation solutions provider," James Reed, president and chief executive officer of USA Truck said in a statement.