The nation in brief: Kids now have second vaccine option 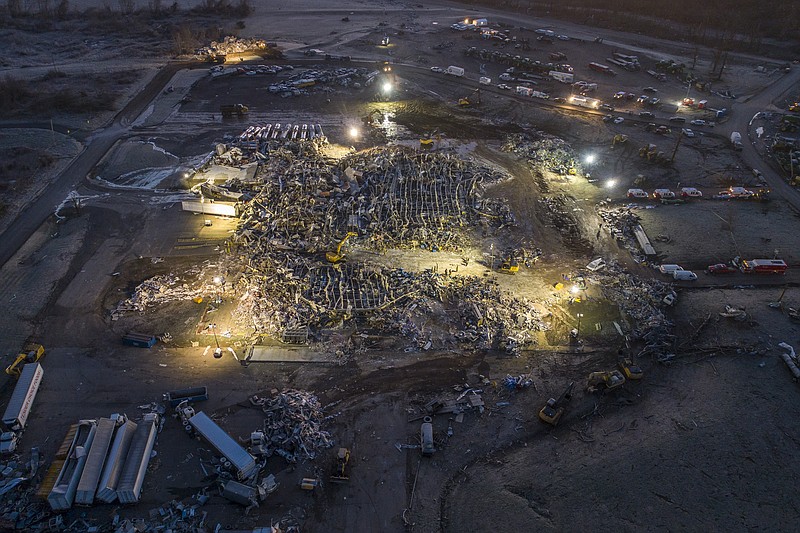 FILE - Search and rescue crews work at the Mayfield Consumer Products candle factory on Dec. 12, 2021 in Mayfield, Ky. The company that operated a Kentucky candle factory leveled by a deadly tornado is planning to ramp up production. Gov. Andy Beshear said Thursday, June 23, 2022, that Mayfield Consumer Products plans a $33 million investment at a nearby plant. It plans to employ more than 500 people full time in the next five years at its factory in Hickory, Kentucky. (Ryan C. Hermens/Lexington Herald-Leader via AP, File)

The Centers for Disease Control and Prevention on Friday announced it is recommending Moderna shots as an option for school-age kids and teens. This group has been able to get shots made by Pfizer since last year.

CDC sets the federal government's vaccine guidance for U.S. doctors and their patients.

Last week, the Food and Drug Administration authorized the shots -- full-strength doses for children 12 to 17 and half-strength for those 6 to 11. The doses are to be given about a month apart. An expert advisory panel this week voted unanimously to recommend that CDC endorse the Moderna shots as well.

Moderna officials have said they expect to offer a booster to kids 6 to 17.

Pelosi's husband is charged with DUI

NAPA, Calif. -- Paul Pelosi, the husband of Speaker of the House Nancy Pelosi, has been charged with driving under the influence in connection with a crash he was in last month.

Paul Pelosi, 82, was arrested after the May 28 crash in Napa County, north of San Francisco, after a DUI test showed he had a blood-alcohol content level of 0.082%. The blood sample was taken about two hours after the collision occurred at 10:17 p.m., the Napa County District Attorney's Office said.

He was driving a 2021 Porsche into an intersection near the town of Yountville and was hit by a 2014 Jeep, according to the California Highway Patrol.

On Thursday, he was charged with driving under the influence of alcohol causing injury and driving with a 0.08% blood alcohol level or higher causing injury.

Prosecutors said that under California law, the charges can be filed as a felony or a misdemeanor. "Based upon the extent of the injuries suffered by the victim, the District Attorney filed misdemeanor charges," the office said.

The office didn't describe the injuries of the 48-year-old Jeep driver or give any other information about the person, saying they have requested privacy. The driver of the Jeep was not arrested.

After his arrest, Paul Pelosi was released on $5,000 bail. He is scheduled to be arraigned Aug. 3.

WASHINGTON -- The State Department is preparing to compensate victims of mysterious brain injuries known as Havana Syndrome with six-figure payments, according to officials and a congressional aide.

Current and former State Department staff and their families who suffered from "qualifying injuries" since cases were first reported among U.S. embassy personnel in Cuba in 2016 will receive payments of about $100,000 to $200,000, the officials and an aide said.

Specific amounts will be determined by the extent and severity of the victims' injuries, which have included brain damage not limited to vertigo, cognitive damage, eyesight and hearing problems, according to the officials.

The payments will apply only to victims employed by the State Department and their dependents. Other victims will have any compensation handled by the federal agency that employed them.

The officials and an aide spoke on condition of anonymity ahead of the expected publication next week of the State Department's plan to compensate victims under the terms of the HAVANA Act, which President Joe Biden signed into law last year.

The company that operated a Kentucky candle factory leveled by a deadly winter tornado plans to ramp up production with a $33 million investment at a nearby plant, Gov. Andy Beshear has announced.

Mayfield Consumer Products, a maker of candles and other home fragrance products, plans to employ more than 500 people full time in the next five years at its factory in Hickory as it builds back production. The company's plant in Mayfield took a direct hit from the tornado that devastated the town in December.

Several workers died at the factory, among the 81 people who died in Kentucky as storms tore through. Thousands left homeless found shelter with relatives and friends, or in emergency facilities, hotels and state parks.

The company faces $21,000 in potential fines for three alleged violations related to the tornado, according to state Labor Cabinet documents obtained by The Associated Press through an open records request.

The company also is defending itself against a lawsuit claiming it showed "flagrant indifference" by refusing to allow employees to go home early as the storm approached.