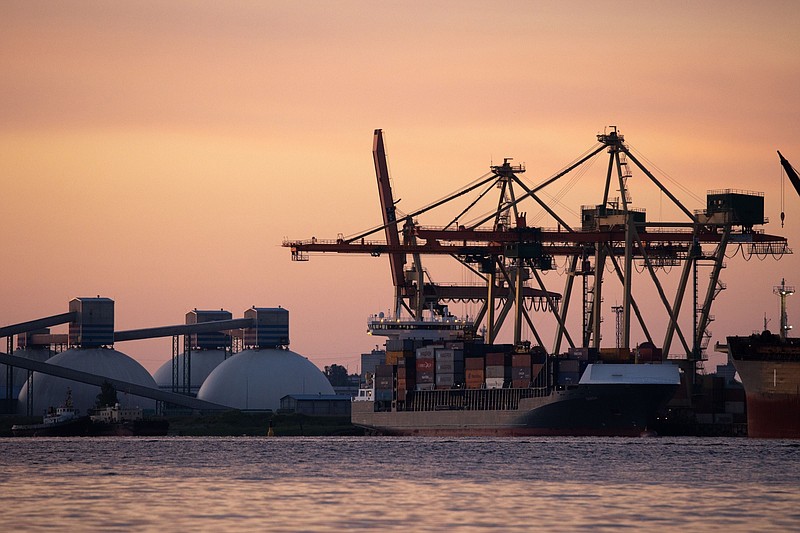 A container ship and fertilizer terminal, left, on the Daugava River at Riga Free Port in Riga, Latvia, on Thursday, June 16, 2022. MUST CREDIT: Bloomberg photo by Andrey Rudakov

The pandemic has changed the nature of global supply chains with companies seeking to source goods from multiple places in order to minimize shipment and production disruptions.

In further evidence of a shift from a just-in-time mentality to a just-in-case one, manufacturers are looking to add suppliers in more than one location to reduce their reliance on any single source, said Choi Na Young Hwan, head of the international logistics analysis team at the think tank, Korea Maritime Institute. That could mean more warehouses will be needed, he said.

"The days when transport and logistics expenses were low are gone," Choi said in an interview last week from Busan. "Companies will want to have bigger inventories in case something unexpected happens."

Port operations around the world have been thrown into disarray over the past two years, with containers piling up at terminals because of a lack of workers to reload them and truck drivers to take them anywhere. Shipping rates soared to record levels in 2021 as exporters in Asia raced to get goods transported to customers in the US and Europe using what limited space was available on vessels.

Although China has been the global factory of goods for many years, more companies are looking for multiple solutions to minimize disruptions, Choi said.

Disturbances will continue into next year because the global supply chain is so fragile post covid that any event, small or big, will affect the flow of goods, Choi said. The end of a two-month lockdown in Shanghai, home to the world's busiest container port, was expected to help improve congestion but the issue just moved to Europe where vessels are waiting longer to unload their cargo, he said.

The war in Ukraine meanwhile has caused Russia-linked containers to stack up at some ports in Europe, causing backlogs and disrupting the flow of available boxes for exporters in Asia, Choi said. Dockworkers in Germany went on strike earlier this month, adding to pressure at container yards in major harbors.

The average waiting time for container ships at Germany's Bremerhaven port increased to 33 hours earlier this month from 18 hours two weeks before, according to a maritime market intelligence provider VesselsValue Ltd. About 60% of the vessels traveling from Europe to Asia in April and May were delayed, and there were 13 ships waiting for a berth in Rotterdam as of June 17, Kuehne + Nagel International AG said.

In the US, labor talks between the International Longshore and Warehouse Union, representing about 15,000 West Coast dockworkers, and the Pacific Maritime Association, made up of roughly 70 companies at 29 ports in the region, started last month as workers' contracts expire this summer. In South Korea, truck drivers returned to work last week after a seven-day strike that caused major production snarls.

"Just when you think things will get better, something else unexpected happens to make things worse," Choi said. "These things can't be resolved overnight. The longer the disruptions last, the longer it will take to resolve the problem."