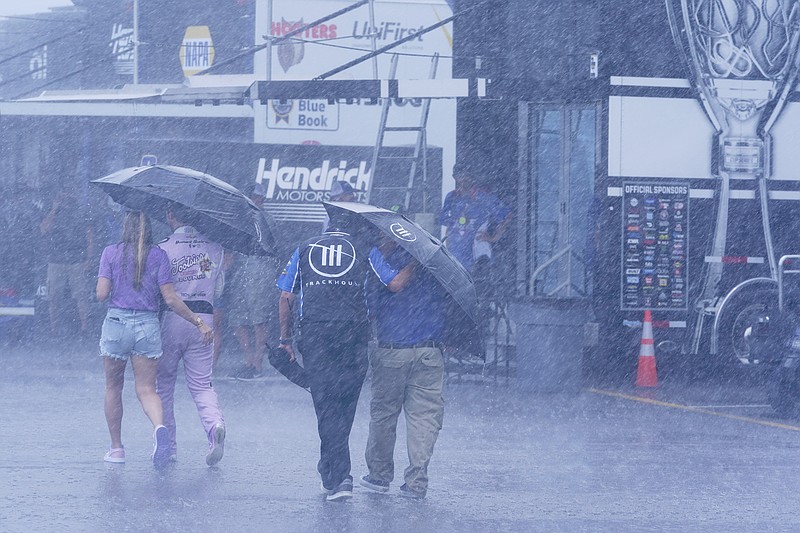 LEBANON, Tenn. -- Denny Hamlin will lead the field to green at Nashville Superspeedway while debuting a heat-combating device for the first time in his career.

Today's forecast calls for temperatures in the high 90s, which would raise the heat inside the race car closer to 125 degrees. It likely will be the hottest race so far this season and the first true heat test of NASCAR's new Next Gen race car.

In his 17th full season, Hamlin has decided to try a "cool suit," which is a fairly new trend in racing. The system stores cold water that is circulated by a small pump to move it into the shirt tubing surrounding the driver.

"I typically don't fight heat as much as other guys do. I don't know why. Probably because I've been doing it for a decade longer than most of them," Hamlin said. "But for the first time all year, I will wear a cool suit, simply because why not take the luxury when you've got it. (The heat) will be a factor for some, for sure."

Hamlin was awarded the pole at Nashville when a surprise rain shower washed out the second round of Saturday qualifying. The session was halted right before the fastest 10 drivers were set for their shootout.

Hamlin got the pole in his No. 11 Toyota for Joe Gibbs Racing, alongside Joey Logano in the No. 22 Ford for Team Penske. Gibbs and Penske are two of the elite Cup organizations who have struggled some this year with the introduction of the new Next Gen stock car, an equalizer that has helped smaller teams compete.

Daniel Suarez and Ross Chastain of Trackhouse Racing both advanced to the second round of qualifying and have a combined three wins this season.

Suarez, who earned the first Cup win of his career at Sonoma this month, will start fifth. Ryan Blaney of Penske is sixth, followed by Chastain.

Kevin Harvick was eighth for Stewart-Haas Racing and followed by JGR teammates Christopher Bell and Martin Truex Jr., who announced he's returning to the team next year.

Bubba Wallace, with team co-owner Michael Jordan watching at the track, was fastest in Friday practice but briefly wiggled during his qualifying lap and will start 30th.

"I told him (Jordan) he should have stayed in the bus," said Hamlin, who co-owns the team with Jordan. "He agreed. It's pressure. There's a lot of pressure when he's out there."

Kyle Busch had the worst day of the four Gibbs drivers: Busch spun on his lap and hit the wall, and he'll start at the back of the field today.