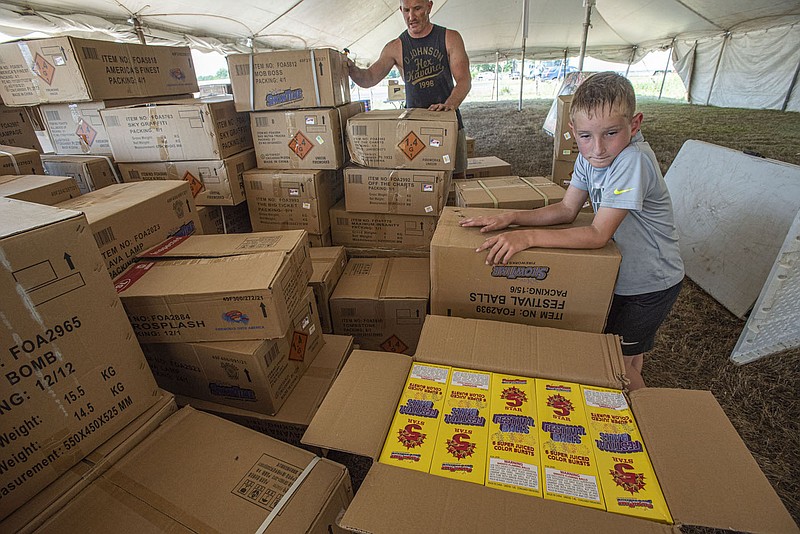 Lonnie Roberson, manager of Super Samâ€™s Fireworks, and his 7-year-old son Rudy Roberson, both of Searcy, unpack boxes of fireworks on Wednesday, June 22, 2022, at their fireworks stand along US-71 in Fort Smith. With the arrival of a shipment of fireworks on Wednesday, the Roberson family, including mother Candace and 4-year-old Carly, were spending the day setting up tables and products to begin selling them as soon as possible ahead of Independence Day next Monday. Visit nwaonline.com/220623Daily/ for today's photo gallery. (NWA Democrat-Gazette/Hank Layton)

July Fourth events kick off at 7 a.m. with the Greenwood Chamber of Commerce 5K Freedom Fest Run. The race is $35 to enter and starts at the chamber, 16 Greenwood Square. Entries will be accepted until 20 minutes prior to the start.

A fireworks show will start at 9:30 p.m., accompanied with music by the River Valley Community Band.

Mayor George McGill said the event usually draws between 10,000 and 12,000 people and fills up the riverfront.

"It brings the whole city -- in fact, it brings the whole River Valley together, because we normally put on the largest firework show in the area. And we'll have great entertainment, food, and again, a great way to celebrate the Fourth of July," he said.

"It's one of those things that we as city government can give back to the people, give them something to do," McGill added. "Because many times, people don't have resources to spend money on holidays like that. Some people can't afford to go to the lake. So we created an event in town that is convenient and free to everyone."

The event page on the city's website states alcohol is prohibited in the park, and no personal fireworks are allowed at the event. Attendees are also asked to avoid rocky areas and the river, and no pedestrians loiter on the West Fort Smith Bridge.

The Van Buren Chamber of Commerce said the city also will have a fireworks display at the Field of Dreams Sports Complex at 1 Toothaker Drive with gates opening at 7 p.m.

Depending on weather conditions, the Van Buren and Fort Smith fireworks displays should be visible from either site.

Fort Smith city code states the sale or use of fireworks is prohibited within the city, except in displays approved by the city administrator and local and state fire marshals. Other River Valley cities have similar, but varying, ordinances regarding fireworks.

Cory White, who has operated A-1 Fireworks for two years , said Thursday it's a little early to be selling fireworks, but he's already had quite a few customers.

"I figure it's going to pick up this weekend and probably not stop all the way up until the Fourth, hopefully. That's the plan," he said.

White said customers come and talk about how the July Fourth holiday is about freedom. "A one-type a year-type thing. They come out and enjoy it with their family. They get to sit around, cook out and have a good time," he said.

"This comes once a year, just like Christmas," White added. "You might as well stock up on some fireworks and have fun with family and friends."

State departments have also released reminders regarding public safety for the upcoming weekend.

The Arkansas Department of Health website states improper use of fireworks can lead to death and injury, including burns, cuts and foreign objects in the eye. To prevent injury, it suggests users read all labels and instructions before igniting, a responsible adult supervise all firework activities, fireworks are lit in a clear outdoor area away from buildings and vehicles, and they be disposed of by wetting them down and placing them in a metal trash can away from any buildings or flammable material. 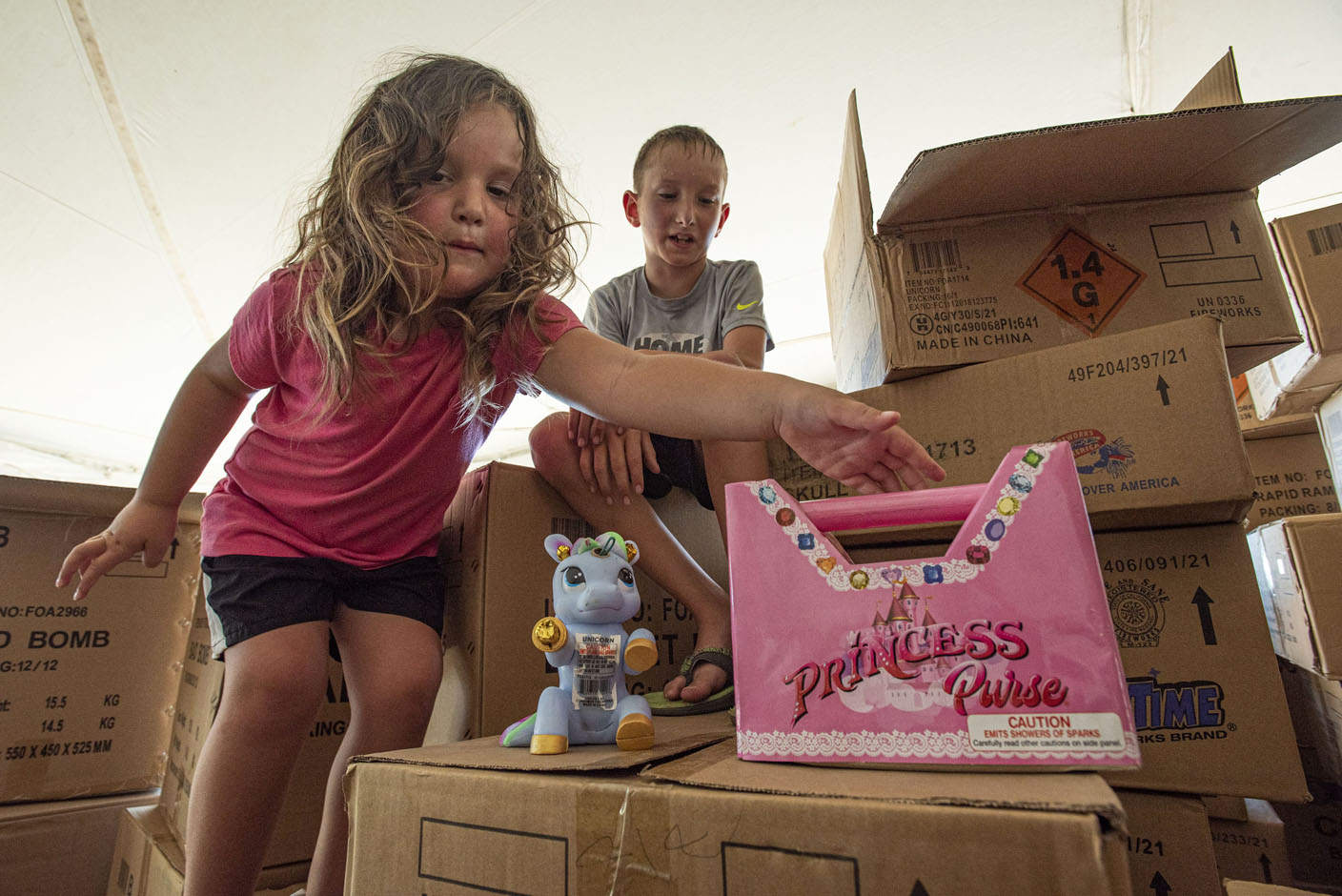 Carly Roberson, 4, and brother Rudy Roberson, 7, both of Searcy, unpack unicorn and princess-themed fireworks on Wednesday, June 22, 2022, at their parentsâ€™ fireworks stand along US-71 in Fort Smith. With the arrival of a shipment of fireworks on Wednesday, Lonnie Roberson, manager of Super Samâ€™s Fireworks, spent the day with his family, including wife Candace, setting up tables and products to begin selling them as soon as possible ahead of Independence Day next Monday. Visit nwaonline.com/220623Daily/ for today's photo gallery. (NWA Democrat-Gazette/Hank Layton) 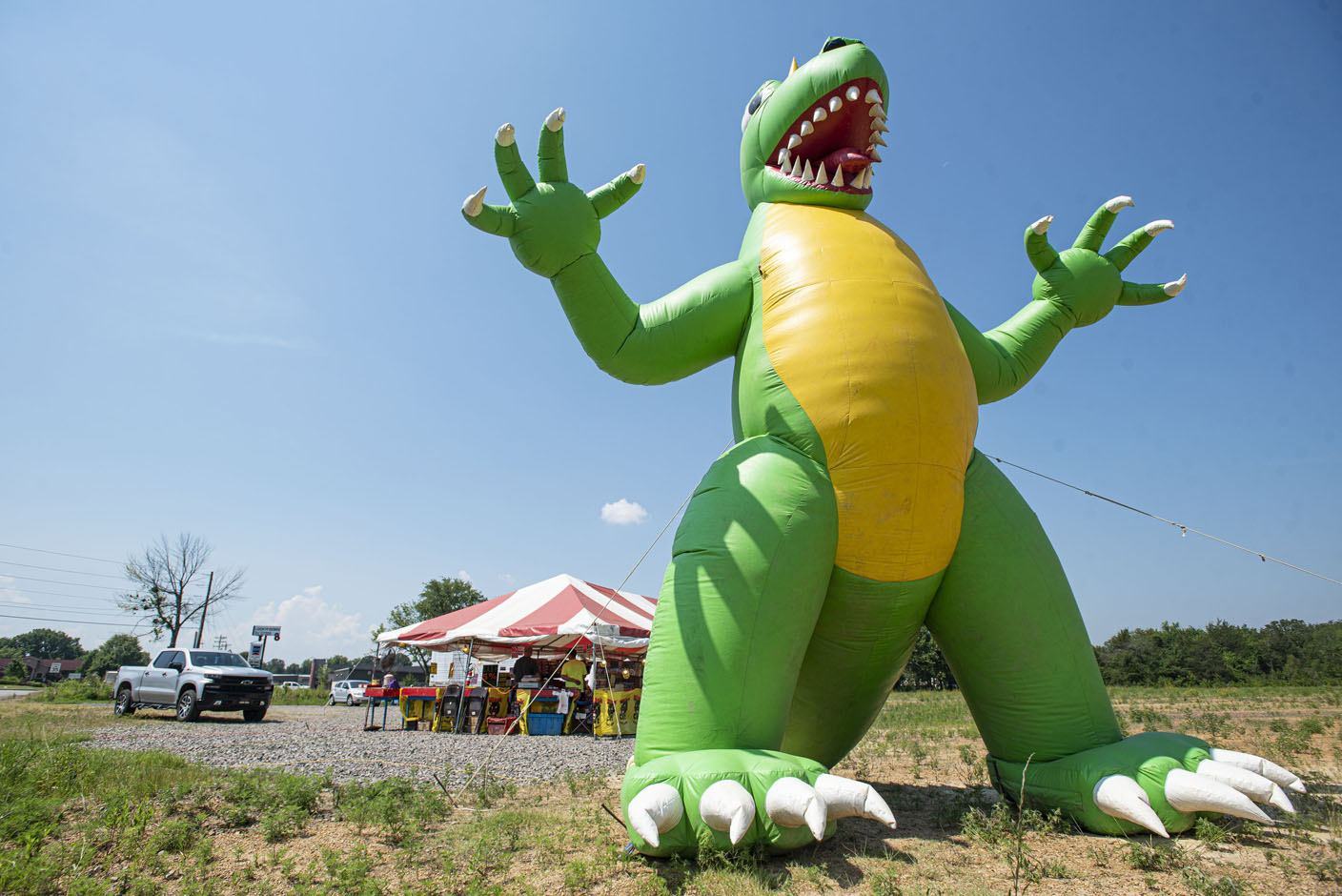 An inflatable dinosaur displays on Wednesday, June 22, 2022, outside the A-1 Discount Fireworks stand along US-71 in Fort Smith. The business, owned by Mike Gongola with more than 25 locations, was one of few in the area that was already open on Wednesday ahead of Independence Day next Monday. Manager Cory White said he had not seen many customers yet but he expected the to change as the weekend drew closer. Visit nwaonline.com/220623Daily/ for today's photo gallery. (NWA Democrat-Gazette/Hank Layton)