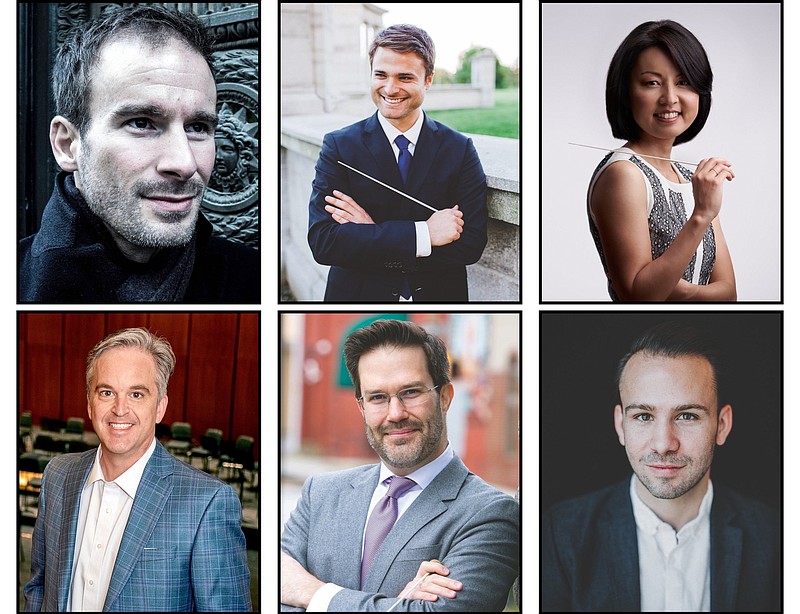 The Arkansas Symphony has released the names of the six conductors who will be on the podium for the six 2022-23 Stella Boyle Smith Masterworks concerts at Little Rock's Robinson Center Performance Hall.

But they are deliberately not discussing a salient detail: Which, if any or all, are under consideration in the multi-year search for a new music director to succeed Philip Mann, who left the orchestra at the end of the 2018-19 season.

Orchestra officials are pairing the conductors with programs that had previously been announced.

Four are guest conductors who led the orchestra in the 2021-22 season and are making their second appearances on the podium.

One had been scheduled to conduct a pair of concerts in May 2020 that had to be canceled in the early wake of the covid-19 pandemic.

One is the orchestra's current artistic director, Geoffrey Robson, whose previous title was associate conductor and who has been guiding the orchestra's musical decision-making since Mann's departure.

Orchestra Chief Executive Officer Christina Littlejohn won't be pinned down. She says she is honoring the orchestra's commitment to conductors' agents by refusing to confirm that any of them are to be considered as finalists for the music director job.

"All of them are great conductors," she says. Including Robson. "Geoff is also one of the excellent conductors."

All she will say is that they are on this year's schedule because "all of them are conductors that the [orchestra] musicians wanted to see." And, she adds, the orchestra's search committee, comprising orchestra players, staff and board members, expects to name Mann's successor by the end of 2022-23.

Vladimir Kulenovic, music director of the Lake Forest (Ill.) Symphony, is the one guest conductor who is making his first appearance with the orchestra, Oct. 1-2.

Violinist Rachel Barton Pine will be the soloist, performing the "Violin Concerto" in B-flat, op.7, No. 2, by Joseph Bologne, also known as "Chevalier de Saint-Georges," and the "Scottish Fantasy," op.46, by Max Bruch. The program also will include the Overture to "The Marriage of Figaro" by Wolfgang Amadeus Mozart and the "Symphonic Metamorphosis of Themes by Carl Maria von Weber" by Paul Hindemith.

Kulenovic was originally scheduled to conduct the May 2-3, 2020, concerts with cellist Zuill Bailey as soloist. (That concert lineup has been rescheduled for this season — see below.)

Littlejohn says it hadn't been possible to reschedule him in the interim. "This is the first chance we've gotten to see him," she says, but "it wasn't anything but covid."

◼️ Stephen Mulligan, Nov. 12-13, joins violinist Geneva Lewis, who will solo in the "Violin Concerto" in e minor by Felix Mendelssohn. The program also includes an as-yet untitled piece by James Lee III that the orchestra has co-commissioned with the Orlando Philharmonic and the "Symphony No. 5" by Jean Sibelius.

Mulligan, associate conductor of the Atlanta Symphony Orchestra and music director of the Atlanta Symphony Youth Orchestra, led the orchestra Sept. 29-30 in the 1919 version of Igor Stravinsky's "Firebird" Suite and, with cellist Gabriel Martins, Robert Schumann's "Cello Concerto." The program also included "The Chairman Dances: Foxtrot for Orchestra" by John Adams and Maurice Ravel's suite "Le Tombeau de Couperin," with an extra movement that Mulligan himself arranged for orchestra from the composer's piano version.

◼️ Akiko Fujimoto will conduct Jan. 28-29 with the orchestra's principal harpist Alisa Coffee as soloist in "Concert Piece for Harp and Orchestra" by Gabriel Pierne. Fujimoto is changing up the originally announced program, dropping "Night Ferry" by Anna Clyne and the "Symphony No. 4" by Ludwig van Beethoven; instead, she's chosen Beethoven's "Leonore Overture No. 3" and movements from Sergei Prokofiev's "Romeo and Juliet" ballet suite.

Fujimoto is music director of the Mid-Texas Symphony in Seguin, Texas; former associate conductor of the Minnesota Orchestra; and wife of former ASO Associate Conductor Israel Getzov. This past April 9-10, she conducted the orchestra in the world premiere of "Pasajes" by Cuban-American composer Tania Leon; with pianist Martina Filjak, Wolfgang Amadeus Mozart's "Piano Concerto No. 21"; and Richard Strauss' tone poem "Death and Transfiguration."

◼️ Andrew Crust mounts the podium Feb. 25-26, with pianist George Li as soloist in the "Rhapsody on a Theme of Paganini" by Sergei Rachmaninoff. The program also will feature "Montgomery Variations" by Margaret Bonds and the "Symphony No. 1" ("Afro-American Symphony") by William Grant Still.

◼️ Robson takes over, April 1-2, the program in which Bailey, in a return engagement with the orchestra, plays the "Cello Concerto" by Antonin Dvorak. The first half of the program will be the "Overture" in C major by Fanny Mendelssohn and the "Symphony No. 3" in E-flat major, "Rhenish," by Robert Schumann. Bailey also performed the massive Dvorak concerto with the orchestra in September 2008 (and appeared in an orchestra-sponsored chamber concert a few days later), and before that, in October 2005, concertos by Erich Wolfgang Korngold and Camille Saint-Saens.

◼️ Matthew Kraemer, music director and principal conductor of the Indianapolis Chamber Orchestra, conducts May 6-7, with pianist Samantha Ege as soloist in the "Concerto for Piano and Strings" by Doreen Carwithen. The orchestra also will perform the "Prelude" to "Irmelin" by Frederick Delius and the "Symphonie Fantastique" by Hector Berlioz.

Kraemer was on the podium for the final pair of 2021-22 Masterworks concerts May 14-15, a program that included violinist Tessa Lark performing Michael Torke's "Sky (Concerto for Violin and Orchestra)" and Antonin Dvorak's "New World" Symphony.

As with the previous conductor search, which brought Mann into the fold in 2010 following a two-year interim (he replaced 17-year maestro David Itkin), the orchestra plans to survey patrons for their opinions on their "concert experience" with the six conductors; unlike the previous search, patrons — subscribers and members — will have a chance to opt in to participate in the survey. (Last time concertgoers received email surveys and paper ballots in the concert hall. There will be no paper involved this time around.)

"It's not a beauty contest," Littlejohn says.

In addition to what are essentially tryouts by performance, all the conductor candidates, identified as such or not, will do pre-concert talks, take part in brown-bag meetings with patrons — "in person, too," Littlejohn says, as the orchestra and its listeners enter a post-covid era. The orchestra, which has been recording its concerts for video streaming, will likely not be doing as much of that going forward, Littlejohn says.

Robson did the programming without conductors in place; pairing them with the programs involved three criteria, Littlejohn explains: "When they were available"; timing — "we didn't want it to be too long since we saw them last"; and that they would be working with different music than what they had conducted previously, "different repertory for the orchestra to hear, and for the conductors to show off."

The conductors couldn't change the soloist or the pieces the soloists would play, "but all were definitely given the opportunity" — or, what Littlejohn described as "wiggle room" — "to push back or change a piece." Everybody except Fujimoto said they wanted to work with the program they were being given, she adds.

"We were able to hit all those goals and still have a beautiful season," she says.

Robson says there were "a variety of factors" in how he ended up with the program he's conducting — "schedule, and a semblance of order" among them, as well as "Zuill Bailey's long relationship with this orchestra. And I just adore Schumann's Third [Symphony]."

The coming season, he says, will offer "a superb lineup of conductors and world-renowned guest artists" performing "a wide variety of programs."

And as regards his own place in the competition for the permanent position, he won't confirm that he's a candidate, but says that "this would be a dream job for many people."

"It would be an honor and a delight to serve as music director of the Arkansas Symphony Orchestra," he says. It's "inspired, with plenty of potential for artistic growth" and has a connection to the community.