Suspensions handed out in Mariners-Angels brawl 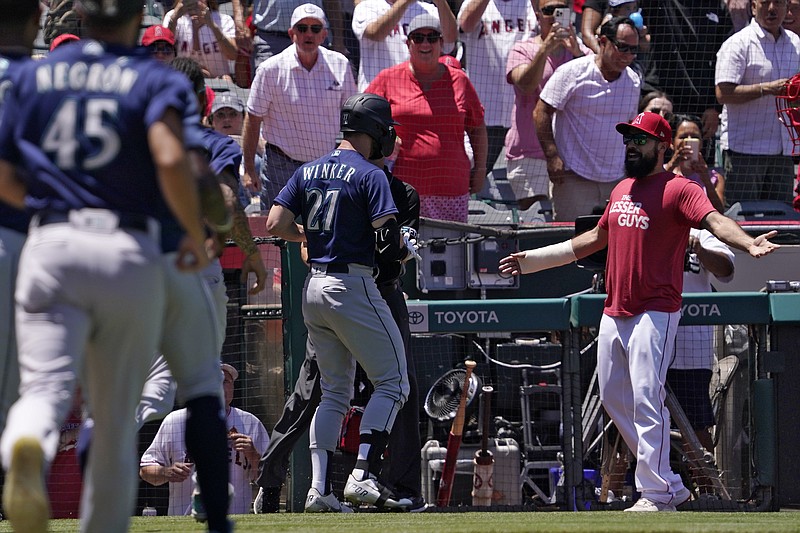 Seattle Mariners' Jesse Winker (27) gets set to fight with Los Angeles Angels Anthony Rendon after he was hit by a pitch and went after players in the Angels dugout during the second inning of a baseball game Sunday, June 26, 2022, in Anaheim, Calif. (AP Photo/Mark J. Terrill)

Suspensions handed out in Mariners-Angels brawl

SEATTLE -- Three Seattle Mariners regulars were suspended Monday for their brawl with the Los Angeles Angels, and another went on the injured list after being hurt in the melee.

Outfielder Jesse Winker was banned seven games, shortstop J.P. Crawford received a five-game suspension and outfielder Julio Rodriguez got a two-game punishment from Major League Baseball for their roles in Sunday's fight. Catcher Luis Torrens went on the 10-day injured list with a left shoulder injury suffered in the fracas.

Manager Scott Servais was sporting bruises on his arm after being caught at the bottom of a pile during the fracas. While Angels interim manager Phil Nevin was banned 10 games, Servais escaped punishment from MLB.

Winker, Crawford and Rodriguez are appealing their suspensions, and they'll remain active until they've had hearings.

The Angels had four players, four coaches and an interpreter suspended. Their losses won't be quite as painful on the player side. Injured third baseman Anthony Rendon got five games, pitchers Andrew Wantz and Ryan Tepera got three and pitcher Raisel Iglesias got two.

The brawl happened in the second inning of Sunday's 2-1 win by the Angels -- four minutes of mayhem that led to a delay of about 18 minutes.

The Angels were upset after Mike Trout was nearly hit in the head by a pitch from Seattle's Erik Swanson on Saturday night. Nevin made the late decision to go with little-used reliever Wantz as an opener Sunday.

Wantz threw a pitch behind Rodriguez's head in the first inning, then hit Winker in the hip to start the second.

That's when the chaos started. Both teams threw numerous punches in the melee that began when Winker charged the Angels' emptying dugout after yelling at Nevin.

Winker was still angry Monday. Asked if the brawl was a bad look for baseball, Winker responded, "I think it's a bad look on Phil Nevin and could have been handled differently." 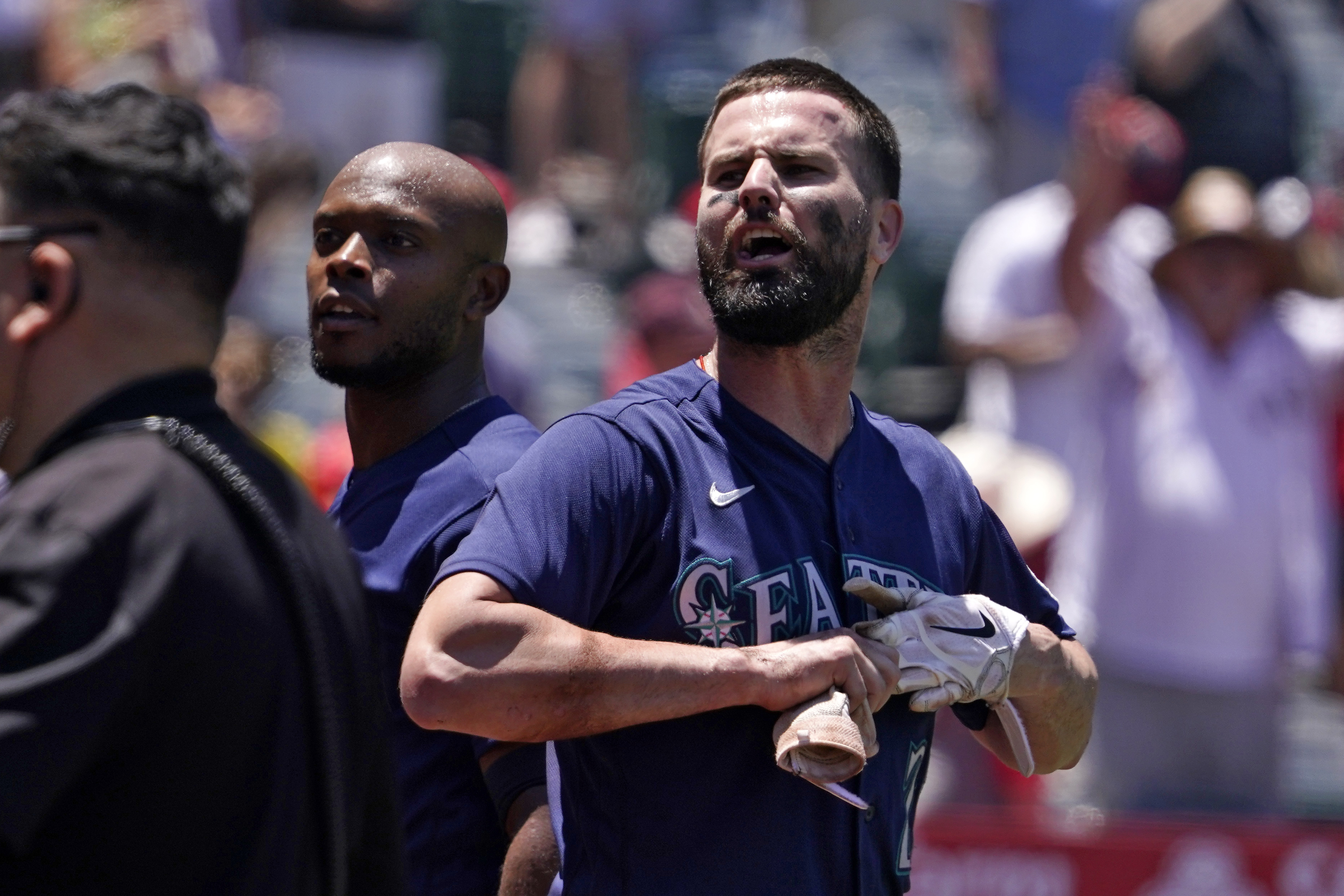 Seattle Mariners' Jesse Winker, right, and Justin Upton jaw with fans after a brawl between members of the Mariners and the Los Angeles Angels during the second inning of a baseball game Sunday, June 26, 2022, in Anaheim, Calif. The fight started after Winker was hit by a pitch. (AP Photo/Mark J. Terrill) 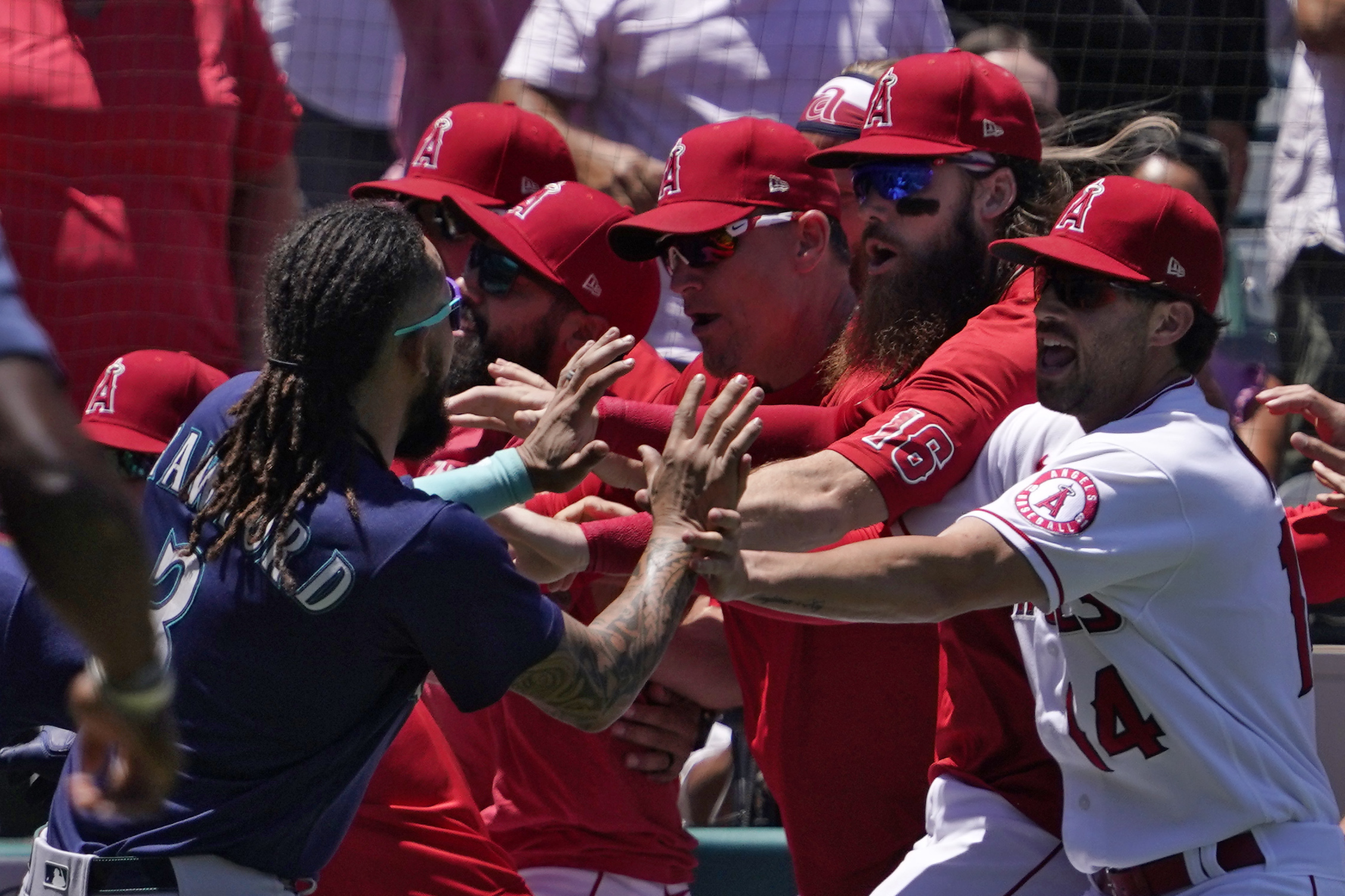 Seattle Mariners' J.P. Crawford, left, and several members of the Los Angeles Angels scuffle after Mariners' Jesse Winker was hit by a pitch during the second inning of a baseball game Sunday, June 26, 2022, in Anaheim, Calif. (AP Photo/Mark J. Terrill)