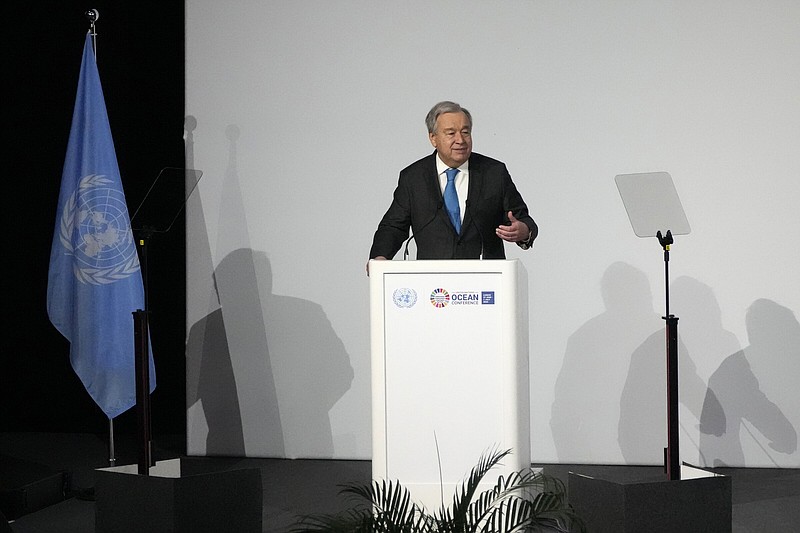 LISBON, Portugal -- Some countries won't accept that the world's oceans belong to everyone and their "egoism" is holding up a global agreement on protecting these vast tracts of the planet, the United Nations chief charged Monday.

U.N. Secretary-General Antonio Guterres didn't say which countries he was referring to, but stressed the significance of the oceans to everyone on the planet.

"International waters are ours," he said.

Guterres was with senior officials and scientists from more than 120 countries attending a five-day U.N. Ocean Conference in Lisbon. Also present were activists frustrated by the failure to come up with international rules that might ensure ocean sustainability.

The U.N. is hoping the conference that got underway Monday will bring fresh momentum to protracted efforts for a global ocean agreement.

There's no comprehensive legal framework applying to the high seas. Oceans cover some 70% of the earth's surface and provide food and livelihoods for billions of people. Some activists refer to them as the largest unregulated area on the planet.

The conference is set to adopt a declaration that, though not binding on its signatories, could help implement and facilitate the protection and conservation of oceans and their resources, according to the U.N..

The declaration is due to be endorsed on Friday. But still beyond reach is a vital new international agreement on Biodiversity Beyond National Jurisdiction, also known as the Treaty of the High Seas.

That treaty is being negotiated within the framework of the United Convention on the Law of the Sea, which is the main international agreement governing human maritime activities.

After a decade of talks, however, including a fourth round of negotiations three months ago, a deal is still not within sight. A fifth round is scheduled for August in New York.

"The world's largest ecosystem ... is still unprotected and is dying as we watch," the activist group Ocean Rebellion said.

Guterres said "significant progress" has been made toward a deal on a high seas treaty and that the world stands at "a crucial moment" for the future of the oceans.

"We need to make people put pressure on those who decide," Guterres said, appealing for people to make themselves heard.

Despite the frustrations, the conference is "an important opportunity to accelerate" steps toward a high seas treaty, the U.N. stated, as delegates informally debate possible ways forward.

The conference is also expected to reaffirm and build upon the some 62 commitments made by governments at the previous summit in Nairobi, Kenya in 2018, from protecting small island states with ocean-based economies to sustainable fishing and combating warming waters.

Financing models for ocean conservation are also on the agenda this year, as well as coming up with science-based, innovative solutions that might improve ocean health.

U.S. climate envoy John Kerry and French President Emmanuel Macron are among those attending some days of the event.