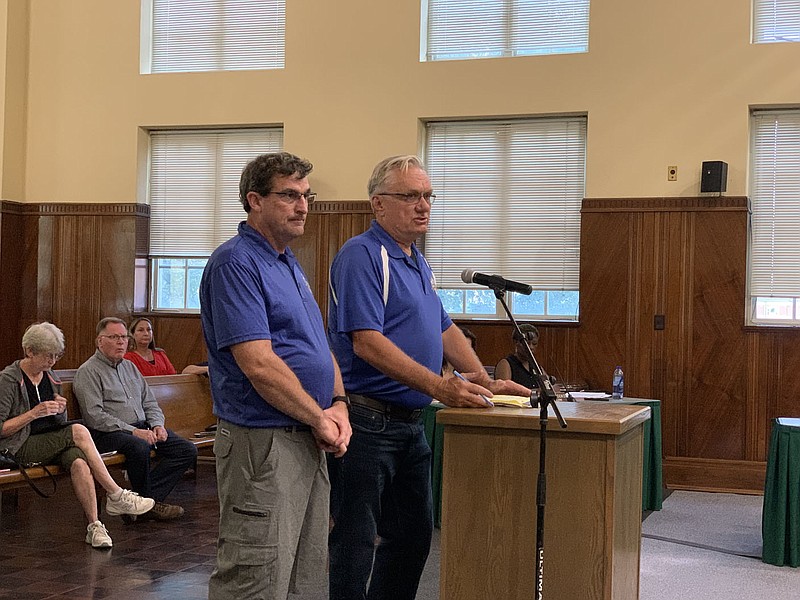 The Fort Smith Soccer Association, an organization doing business as the River Valley Futbol Club, is pursuing litigation against two former employees and the limited liability company, A Squared Athletics, that now has an agreement with the county to use the complex. The group filed a complaint requesting a preliminary injunction May 16 in circuit court, which granted it that same day before dissolving it June 6.

Ben Thomas of the River Valley Futbol Club told the Quorum Court at its June 21 meeting that the county didn't notify the club it lost the rights to use the soccer fields to a new, private company when it happened. He requested the organization be put on the agenda for the July 19 meeting to discuss the issue and the group's history of using the fields, although the Quorum Court didn't take any action.

County Judge David Hudson said while Ben Geren Park has enjoyed a long working relationship with soccer associations operating recreational and competitive teams at the soccer complex, these associations have periodically had reorganizations and leadership changes. The county had an agreement with A Squared Athletics for the 2021 budget year, with the latter organizing teams, play and tournaments well during that time. The county has an agreement with A Squared for this year as well.

The River Valley Futbol Club's lawsuit was filed against A Squared Athletics, Ashley Morehead and Amber England, according to court records. It identified Morehead and England as the former vice president of the association's board and club administrator of the association respectively. The organization was formed in February 1981.

The lawsuit accuses England of writing unauthorized extra salary checks to herself starting in January 2020. England and Morehead also apparently failed to file the tax form necessary for the River Valley Futbol Club to maintain its federal tax-exempt status, something the association was notified had been revoked in February 2020.

England and Morehead opened a second bank account in the organization's name at First National Bank without the approval of its board in August 2020, the lawsuit states. Two laptops were purchased for $3,072 the following April using the association's account at Arvest Bank, also without the board's approval. England and Morehead reportedly have the laptops and refuse to return them to the organization.

England and Morehead changed the name of the association's account with Sports Connect, which hosts the association's website and is the means through which it receives dues for soccer players, to A Squared in May 2021 as well.

They also made it so all deposits via Sports Connect intended for the association's Arvest Bank account went into A Squared's bank account, the latter of which received about $147,008 while the former received nothing after May 14, 2021. The lawsuit states that other money for spring and fall 2021 wasn't deposited into the association's bank account either, although about $3,413 was transferred from it to the A Squared account in August and October of that year.

Morehead told association board members in November 2021 that the club had been disbanded and A Squared was taking it over, according to the lawsuit. She and England also told them they had formed a limited liability company, so there was no longer a board. The pair signed a 2022 facility use agreement with Sebastian County under the A Squared name for use of the Ben Geren softball complex the following April, something they reportedly did while under the guise of being the River Valley Futbol Club.

Attorneys representing England, Morehead and A Squared filed separate answers to the River Valley Futbol Club's complaint June 2 and 3, according to court records. These requested that the complaint be dismissed and the three parties be granted relief in the matter, including the reimbursement of attorney's fees.

These answers also addressed each facet of the complaint point by point, denying a majority of them either partially or fully. Notably, they denied the accusations that England and Morehead signed a facility use agreement with the county on the association's behalf, instead arguing this was done on behalf of A Squared.