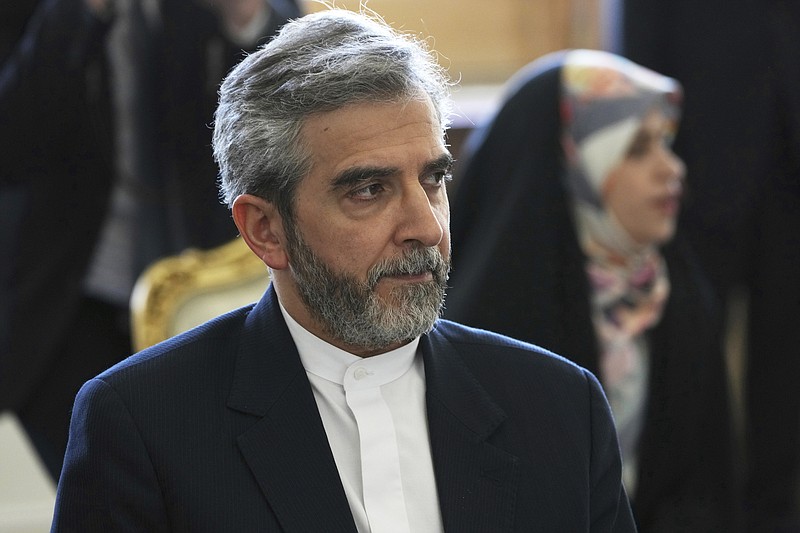 Enrique Mora made the comment on Twitter after what he described as two days of "intense" talks he oversaw in Doha.

"Unfortunately, not yet the progress the EU team as coordinator had hoped for," Mora wrote. "We will keep working with even greater urgency to bring back on track a key deal for non-proliferation and regional stability."

Mora's comments came hours after the semiofficial Tasnim news agency described the negotiations as finished and having "no effect on breaking the deadlock in the talks."

Tasnim claimed that the American position did not include "a guarantee for Iran benefiting economically from the deal," quoting what it described as unnamed "informed sources."

"Washington is seeking to revive the (deal) in order to limit Iran without economic achievement for our country," the Tasnim report claimed.

After the Tasnim report, foreign minister spokesman Nasser Kanaani issued a statement describing the two-day talks as "being held in a professional and serious atmosphere."

The State Department did not immediately acknowledge the end of the talks.

"As we and our European allies have made clear, we are prepared to immediately conclude and implement the deal we negotiated in Vienna for mutual return to full implementation" of the nuclear deal, the State Department said in an earlier statement. "But for that, Iran needs to decide to drop their additional demands that go beyond" the deal.

30 migrants missing from boat off Libya

CAIRO -- A flimsy rubber boat collapsed and sank in the Mediterranean Sea off Libya's coast, leaving at least 30 people including women and children missing and feared dead, an international charity said Wednesday.

Officials said meanwhile that they found the bodies of 20 migrants who died of thirst in the desert close to the border with Chad.

The deaths marked the latest tragedies involving migrants who use Libya as a transit point on a perilous journey to Europe.

A rescue ship operated by the group reached the boat, and managed to rescue dozens of other migrants including some women, the charity said. A pregnant woman died on board the rescue ship Geo Barents.

The missing migrants include five women and eight children, Doctors Without Borders said.

"We have seen so many people drowning -- men, women and children -- and we will never forget the day we had yesterday. We tried to save them but we couldn't save them all," a 17-year-old boy from Cameroon said in a testimony posted by Doctors Without Borders on Twitter.

CIUDAD VICTORIA, Mexico -- A journalist was shot to death Wednesday in northeastern Mexico as he was leaving his house with his 23-year-old daughter, who was seriously injured, according to state prosecutors and the newspaper that employed him.

Antonio de la Cruz, 47, was a reporter for the local newspaper Expreso for almost three decades. His death brings the number of journalists killed this year in the country to 12, the deadliest for the Mexican press.

De la Cruz was shot at the door of his house in Ciudad Victoria, capital of the state of Tamaulipas on the U.S. border. The region is mired in violence linked to organized crime.

De la Cruz was "very aware of the reality of Tamaulipas, very brave," Miguel Dominguez, director of the newspaper, said.

"He never expressed any concern to us," Dominguez said.

The governor of Tamaulipas, Francisco Garcia Cabeza de Vaca, promised an investigation of the killing Wednesday so that "this cowardly crime does not go unpunished."

Venezuela on alert for Caribbean weather

SAN JUAN, Puerto Rico -- The government of Venezuela shuttered schools, opened shelters and restricted air and water transportation on Wednesday as a tropical disturbance sped through the southern Caribbean on a path to Central America.

"Care, caution, preparation, nerves of steel!" he said during a press conference.

Meanwhile, the government in the nearby Dutch Caribbean island of Curacao imposed a curfew that began late Wednesday morning, and ordered all businesses to close.

The disturbance earlier affected Trinidad & Tobago, where officials said the storms caused power failures and temporarily shut down wastewater plants, although no serious damage was reported.