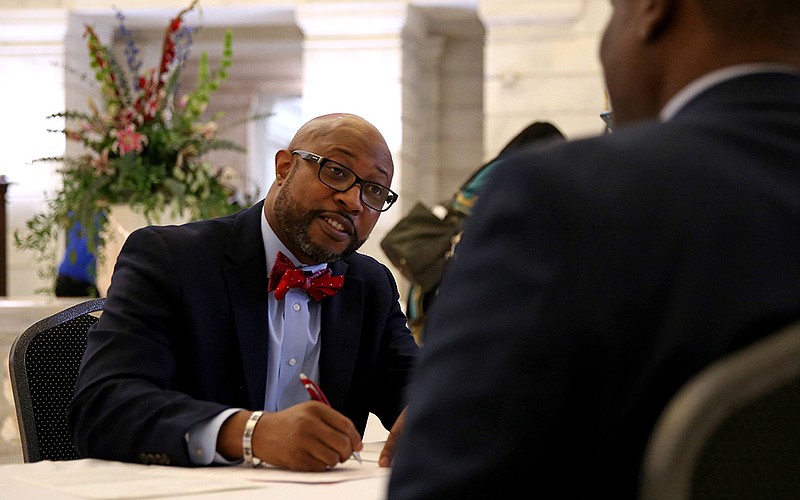 Leon Jones, Jr. files as a candidate for attorney general on the final day of filing at the state Capitol on Tuesday, March 1, 2022. (Arkansas Democrat-Gazette/Colin Murphey)

Candidate filing came to a close on Tuesday in Arkansas, with a total of 446 candidates putting their names on the ballot for state and federal office in 2022.

That number includes candidates for partisan office as well as nonpartisan judicial candidates who filed either during the Feb. 22-March 1 window or via petition. There were 218 Republicans, a record according to the party, 94 Democrats and 48 Libertarians.

The filing period ended the way it began one week earlier, with the bang of a gavel by Secretary of State John Thurston. The first day was the busiest with 283 candidates filing Feb. 22, and daily filings slowed amid severe winter weather in much of the state last week.

There are 117 contested races this year, according to the candidate list available on the secretary of state's website Tuesday evening.

[FULL LIST: See the complete list of who filed to run of state or federal office in 2022 » arkansasonline.com/filinglist22 ]

Wood joins five other candidates seeking the GOP nomination for the state's No. 2 job. He said his experience as a county executive and as deputy secretary of state prior to that set him apart.

"All of that is I think really bringing something to this office as lieutenant governor, bringing some of that work, some of those results to here, so nobody else can talk about doing that because I'm already doing that," Wood said.

As lieutenant governor, Wood said he would work with all 75 counties on economic development, infrastructure, education and the needs of children and veterans.

Democrat Kelly Krout, a foster care advocate from Lowell, and Libertarian Frank Gilbert are also running for the position.

Jones said he has the relevant experience for the job as the former Arkansas Fair Housing Commission executive director and former director of the Arkansas Department of Labor.

"I've had as many as 95 employees, as much as almost a $7 million budget, and so the people of Arkansas need someone who personally understands budget and also has a vision for the office," he said.

Jones said he wants to increase the office's resources in its human and drug trafficking division and cyber crimes divisions and to create five 15-county districts that each have an investigator "so that we can have boots on the ground solving local problems with local people."

Whitaker, a businesswoman and nonprofit founder, had announced in the fall that she would run for mayor of Little Rock. She said Tuesday she felt the treasurer's office was a better representation of what she could offer to the state.

She said she has a wide base of skills and talents to apply as needed, including her background in cybersecurity, contract management and audit control.

"I'm excited to be here, and I just love supporting and protecting the state of Arkansas," she said.

Candidates are now looking toward the partisan primary and the nonpartisan judicial election, which are scheduled for May 24. The last day to register to vote in those elections is 30 days prior, on April 24, secretary of state spokesman Kevin Niehaus said.

The general election is set for Nov. 8.