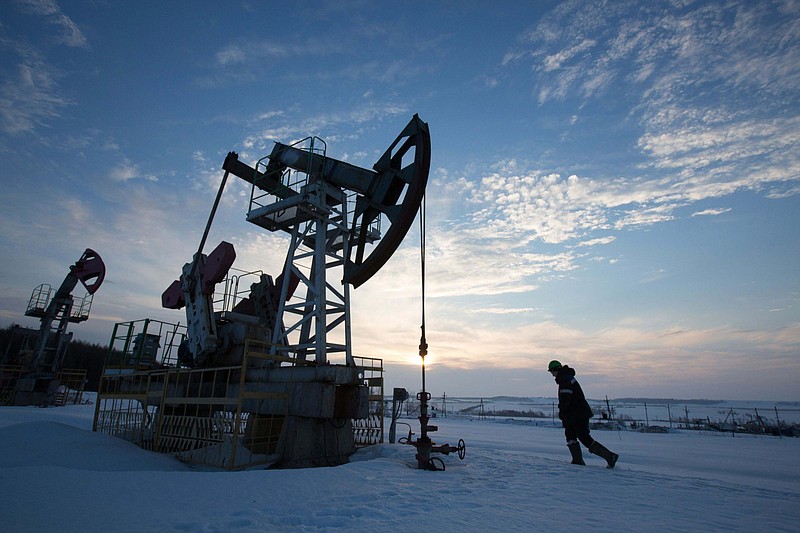 An oil worker inspects a pumping jack, also known as a 'nodding donkey,' during drilling operations in an oilfield operated by Bashneft in the village of Otrada, 150 kilomters from Ufa, Russia, on March 5, 2016. MUST CREDIT: Bloomberg photo by Andrey Rudakov.

Benchmark oil prices climbed to over $100 a barrel Tuesday as a decision by the U.S. and other major economies to coordinate a release of oil stockpiles failed to quell concerns of major shortfall in supplies as sanctions mount on Russia.

West Texas Intermediate futures in New York surged 11% to trade above $105 a barrel as of 4:30 p.m.. Brent futures rose up 9.6% to just over $107 a barrel. The International Energy Agency, which represents key industrialized consumers including Japan and Germany, agreed to deploy 60 million barrels from stockpiles around the world. Meanwhile, the European Union was discussing the exclusion of seven Russian banks from the SWIFT messaging system, including VTB Bank, in the latest list of financial penalties against Russia.

"You are looking at losing 5 million barrels of Russian exports," said Bob Yawger, director of the futures division at Mizuho Securities USA. The coordinated strategic reserves "doesn't compete with that. The market can't afford to lose Russia's barrels."

Russia plays an outsized role in global energy markets as the third-largest oil producer. Its exports of 5 million barrels of crude per day amount to about 12% of the global oil trade. Some 60% goes to Europe and another 20% to China.

A 60 million barrel release from strategic oil reserves would be equivalent to less than six days of Russian output, and traders are weighing the potential impact. This release will mark the second from American crude reserves within a few months as soaring fuel costs become a growing political problem for U.S. President Joe Biden.

Before the pandemic, global oil consumption was about 100 million barrels a day.

From the U.S. perspective, the price of crude oil determines a big portion of what drivers pay to fill up their cars with gasoline. The national average for a gallon of gas Tuesday was $3.61, which is 26 cents more than a month ago and 90 cents more than a year ago, according to motor club federation AAA.

The board of the Paris-based energy agency made the decision at an extraordinary meeting of energy ministers chaired by U.S. Energy Secretary Jennifer Granholm. She said in a statement that Biden approved a commitment of 30 million barrels and that the U.S. is ready to "take additional measures" if needed.

The invasion of Ukraine has upended commodity markets from oil to natural gas and wheat, piling inflationary pressure on governments. While the U.S. and Europe have so far stopped short of imposing sanctions directly on Russian commodities, the trade in those raw materials is seizing up as banks pull financing and shipping costs surge. Russia is the world's third-biggest oil producer and, along with Saudi Arabia, an influential member of the OPEC Plus alliance.

The turmoil sparked by the invasion will bring a new challenge in balancing a tightening market for OPEC Plus, which meets today to discuss output policy. Delegates said the cartel will probably stick to its plan of only gradually increasing supply. President Vladimir Putin spoke to the leader of the United Arab Emirates ahead of the meeting, while Saudi Arabia said it supports efforts to reduce escalation in Ukraine.

Saudi Arabia has signaled that it doesn't consider markets to be tight enough to speed up the restoration of production that the Organization of Petroleum Exporting Countries and its partners halted during the pandemic. Many other nations in the 23-member alliance couldn't increase supplies any faster even if they chose to, owing to lack of investment and instability.

It's the first time the International Energy Agency has made a synchronised release of oil stocks since the Libyan civil war in 2011. There are echoes of that crisis in today's events: It was Saudi Arabia's reluctance to open the taps a decade ago to offset the disruption caused by the uprising against dictator Moammar Qaddafi that prompted the agency into action.

Previous deployments came during the 1991 Gulf War, and the onslaught of hurricanes Rita and Katrina in 2005, making this just the fourth such intervention in the agency's five-decade history.

The agency's 30 members, drawn from the Organization for Economic Cooperation and Development, include the U.S., Germany, France, the United Kingdom, Japan and Canada. Members hold emergency stockpiles of 1.5 billion barrels of oil.

The invasion of Ukraine is also prompting oil companies to wind up their operations in Russia. Shell and BP have announced they will pull out, while TotalEnergies said Tuesday it will no longer invest in new projects in the country.

So far, loadings of tankers of oil and liquefied natural gas from Russia are proceeding as normal, said Alex Booth, head of research at Kpler, which tracks shipping.

But, he added, a liquefied natural gas tanker coming from a facility partly owned by TotalEnergies in Russia had recently changed its destination from Britain to France after London barred Russian-linked ships from British ports.