Arkansas’ general revenue for February $528.5M, highest of any February on record 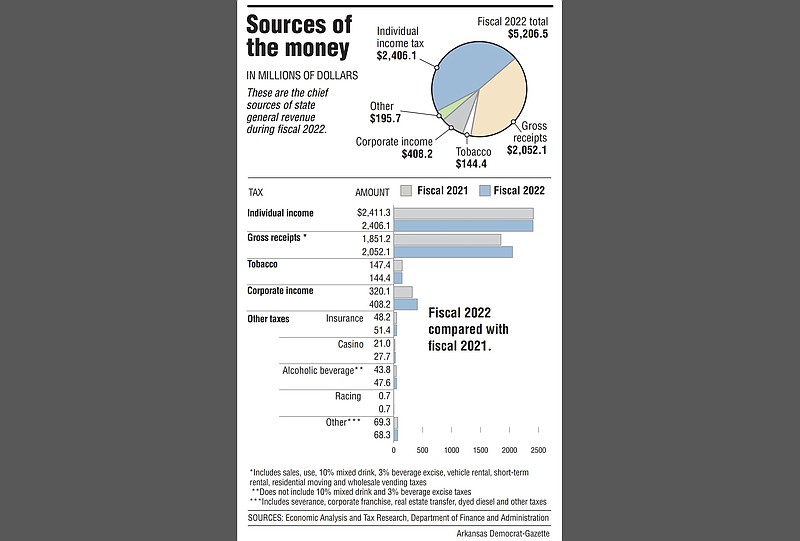 These are the chief sources of Arkansas general revenue during fiscal 2022, in millions of dollars.

Arkansas' general revenue in February increased by $34.9 million over the same month a year ago to $528.5 million and beat the latest forecast by $62.6 million.

That total is the highest of any February on record, beating the previous high of $501.5 million collected in February 2020, state Department of Finance and Administration tax analyst Whitney McLaughlin said.

Gov. Asa Hutchinson said in a statement that the year-to-date net surplus of $317 million reported in the state finance department's monthly report released Wednesday shows the state is "on the right track to provide surplus funds to support law enforcement and invest in necessary capital projects."

"These investments are one-time commitments that meet priority needs," Hutchinson said. "We continue to manage the budget conservatively which puts Arkansas in excellent financial position for the future."

In his State of the State address last month, Hutchinson expressed support for putting state surplus funds toward stipends and equipment grants for law enforcement as well as toward a nearly 500-bed prison expansion in Calico Rock.

"Year-to-date revenue growth remains elevated in key categories. As a sign of wage growth across Arkansas, gains in payroll withholding tax were higher than expected. This follows stage one implementation of the largest income tax cut in state history on January 1," Walter said in a statement.

John Shelnutt, the state's chief economic forecaster, said this month's report reflects a rebound in the state economy in some sectors that are pushing up the overall growth rate, especially in individual withholding tax revenue.

He added that sales tax revenue is variable because of the stimulus checks sent to Americans last year, but the state economy is still building on those surges.

"In other words, we're not coming back down off of them, we're building on them, so it still reflects a strong economy in the state both in labor markets and in consumption," Shelnutt said.

Shelnutt added that February is the lowest month of the year for net available collections because it falls after the Christmas shopping season and at the usual ramp up of refund claims in the income tax filing season.

February is the eighth month of fiscal 2022, which ends June 30.

Shelnutt noted that the numbers show an unusual comparison to last year because the Internal Revenue Service was delayed in accepting returns last year.

"So that was a very low, minimal number of refunds last year and a more normal rate of refund payout this year," he said.

In 2020, the individual income tax payment deadline was shifted from April 15 to July 15 as a onetime change for pandemic relief efforts, resulting in two income tax filing dates in fiscal 2021. The 2021 deadline was in May; McLaughlin said in an email the impact of last year's due date shift is insignificant to the comparison of this February's income tax refunds to last year's refunds. This year's deadline for federal and state taxes is April 18.