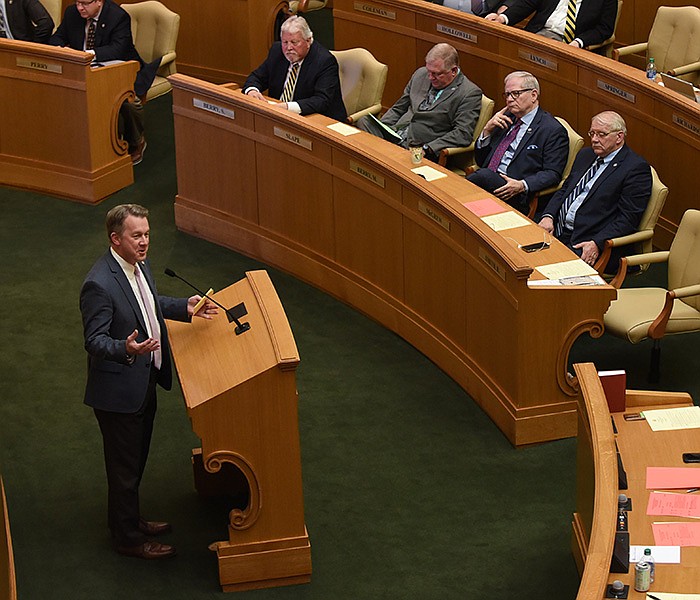 It was the third time the bill was presented before the House over the past couple of weeks.

"What this does, it just passes their budget with very little change except matching and some salaries," Rep. Lane Jean, R-Magnolia, said. "I know this is our third go at it. The options are give them a budget, or give them no budget, or come back at a special session before June 30th and give them a budget."

The controversy surrounding PBS built steam in December when Sen. Dan Sullivan, R-Jonesboro, said he had looked at the personal Twitter page of one of the producers, Jesse McMahon, and saw what Sullivan described as "radical" views on climate change and the Biden administration's proposed infrastructure package.

In an interview Dec. 20, Sullivan said he believed the views of people to whom the state awards contracts should be "reflective of the views of the state of Arkansas," which predominantly supports Republican policies.

Sullivan introduced a bill this week that would reduce the spending authority for Arkansas PBS' state operations by about 25% in the coming fiscal year.

The proposed general revenue budget for Arkansas PBS for fiscal year 2023, starting July 1, is $5,472,881 -- up from the current $5,459,958 -- according to Scott Hardin, a spokesman for the state Department of Finance and Administration.

Gov. Asa Hutchinson said Monday that "cutting their funding would have an impact on the services Arkansas PBS provides to the state." He noted that Arkansas PBS provides several services throughout the state, including streaming state government meetings, and helped combat learning loss while the state transitioned to remote learning. It also offers 80,000 hours of continuing education to teachers and runs 8½ hours of children's programming daily,he said.

Sullivan told the Arkansas Democrat-Gazette on Wednesday afternoon legislators met with PBS on Tuesday and came to an agreement.

"They told us that, yes, they need to improve on a few things," he said. "They agreed to a study as well. Not sure if it will be an interim study, but they agreed to work on some issues."

Rep. John Payton, R-Wilburn, told the House on Wednesday before the vote was held that things had transpired that would make legislators feel comfortable about approving the bill.

"A lot of concerns from this body and from the Senate came to light after we voted it down the first time," Payton said. "We have met with people at AETN, and they have made concessions and assured us that they are willing to work with us on policy issues while we have time in the interim leading into the next session to address things."

Payton said a group of legislators will be brought together by the Arkansas Legislative Council for meetings with AETN, as well.

"At this point, as Rep. Jean has said, it's either fund it or don't fund it without any real plan on how to change those things that we are not satisfied with," Payton said. "So I would encourage a yes vote. We have made our point."

Rep. Carlton Wing, R-North Little Rock, also told House members the budget was necessary for some primary functions in the state to work because of Federal Communications Commission guidelines.

"The Wireless Emergency System that we have on repeating towers throughout the state is run by AETN, and that is very vital backup to the FCC requirements for us to be able to have weather alerts and Amber alerts throughout the state," Wing said. "So it's very imperative that we fund this. The FCC will be adding new requirements in July, and this will put us right there in place for that to take place."

Sullivan said sometimes a statement must be made to an agency and that might mean withholding budget.

"We want to work together to solve issues," he said. "Not just PBS, but for any state agency."

Sullivan said he believes AETN will follow through with its promise to make changes, and if it doesn't it will have to revisit the issue in 2023.