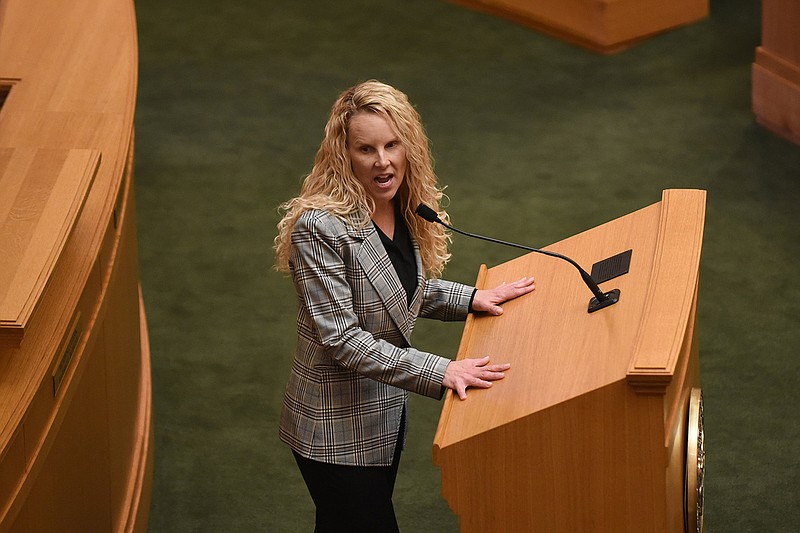 Rep. DeAnn Vaught, R-Horatio, speaks for HB1034, an act for the Department of Corrections, during the house session Wednesday, March 2, 2022 at the state Capitol in Little Rock. See more photos at arkansasonline.com/33ledge/. (Arkansas Democrat-Gazette/Staci Vandagriff)

In a voice vote, the Arkansas House voted Wednesday to amend the Division of Correction appropriation to grant $75 million in spending authority for a 498-bed prison expansion at the North Central Unit in Calico Rock.

The amendment also will require an ammunition and ammo audit to be done at the Department of Corrections.

Rep. Nicole Clowney, D-Fayetteville, said she opposed the proposed amendment because she felt like expanding Calico Rock wasn't the solution to overcrowding and is an imprudent decision.

"First, it's expensive, so this appropriation allows for anywhere $26 million to $75 million to go towards just the building of this expansion, but that doesn't include ongoing costs of housing an additional 500 prisoners," she said. "Those ongoing costs will be immense. It will cost around $71 a day to house an inmate in this state. That equals $13 million in additional expenditures every year after this expansion."

Clowney also said the issue could be addressed by taking a serious look at some of the crimes that were putting people in prison. She compared expanding the prison to putting an expensive ice pack on a broken leg.

Rep. Mark Berry, R-Ozark, said he respects Clowney's comments on the need to mitigate some of the challenges with people who are in prison who might not need to be there, but said he also knew the challenges county jails were facing.

"Our sheriff's departments have an immediate need," he said. "We have a brand new county jail in my county, and it's already popping at the seams because they have felons in that facility. They need a place to provide some relief for our county jails."