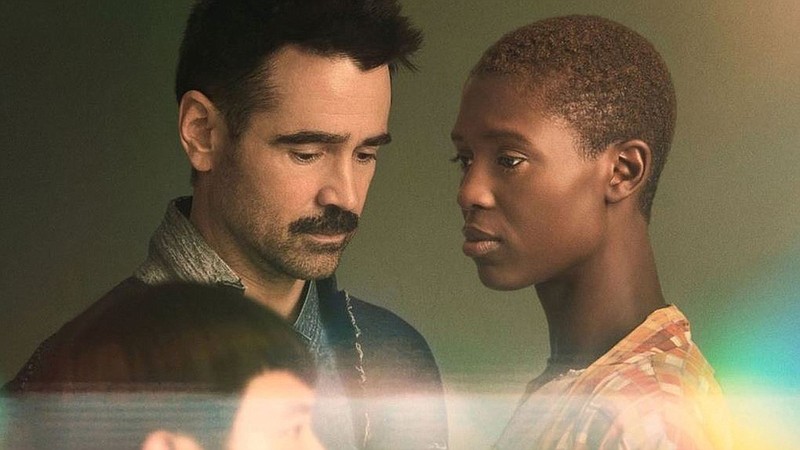 Jake Flemming (Colin Farrell) and his wife, Kyra (Jodie Turner-Smith), have to cope with loss and grief when their family’s “certified refurbished” robot companion malfunctions in Kogonada’s “After Yang.”

One of my favorite directorial debuts in recent years came from South Korean-born American filmmaker Kogonada. His artful and quietly stirring "Columbus" from 2017 really left its mark on me. It was a movie full of longing and soul-searching. It also showed off Kogonada's moving contemplative style. One he honed while working as a video essayist, spotlighting legendary auteurs from cinema's rich history. His latest film "After Yang" has similar emotional depth and texture as "Columbus." Set in the not-too-distant future, the story hits me in one of my soft spots -- daddy/daughter relationships.

Distributed by A24, "After Yang" has rightfully received mostly positive reviews following its North American premiere at Sundance. Much like "Columbus," this is far from a mainstream film, and those unable to get in tune with its quiet, patient rhythm and introspective gaze may find it to be a challenge. But trust me, it's completely worth your effort.

What Kogonada has given us is essentially a reflection of humanity, full of thoughtful meditations on life, loss, the meaning of family, and finding our place in the world. He takes his fairly simple premise and adorns it in sci-fi dressing. But at its core is a movie seeking to engage your mind, heart and senses. For that to work, Kogonada has to immerse us in its world. He does it through some of his favorite ingredients -- nature, architecture, rich colors, the soothing piano chords and aching strings of the score. These familiar creative strokes help give Kogonada's films their identity.

Jake Flemming (Colin Farrell), his wife Kyra (Jodie Turner-Smith), their adopted daughter Mika (Malea Emma Tjandrawidjaja), and their android Yang (Justin H. Min) make for a sweet and happy family. Jake owns a tea shop where he spends much of his time exploring new recipes. Kyra is a businesswoman whose job requires her to work long hours. That leaves Mika with Yang, a "certified refurbished" big brother figure, bought by Jake and Kyra to help their daughter connect with her Chinese heritage. The two become inseparable to the point where Yang knows Mika better than her parents do.

But then one evening Yang shuts down and won't restart. Jake sets out to have him repaired, begrudgingly at first but urged on by his daughter's heartbreak. He quickly learns that buying an android secondhand was a mistake. Yang should still be under warranty, but finding the dealer to honor it proves impossible. He tries an uncertified repairman (Ritchie Coster), but all he gets are half-baked conspiracy theories about techno-surveillance and secret android spyware.

Meanwhile Yang's absence has a ripple effect across the household with each member feeling the weight of their loss. While he was chosen and bought specifically with Mika in mind, Yang was a sweet, compassionate and supportive presence for the entire family. Kyra and especially Jake quickly begin to understand the power of their attachment to Yang and the sense of loss that comes with his absence.

Running out of options, Jake seeks out an A.I. museum curator named Cleo (Sarita Choudhury) who opens up a database of recorded memories stored inside of Yang. As Jake begins perusing these short video clips (one for every day of Yang's 'life'), he's taken on a bittersweet journey of self-discovery. He finds himself deeply affected by Yang's warmly poetic way of looking at the world. It moves him to take stock of himself and reflect on the life he's been living. Like George Bailey in a much lower key, Jake comes to realize he truly has a wonderful life.

But there are also secrets buried deep within Yang's memories. A mysterious young woman (Haley Lu Richardson) who Jake has never seen before pops up in several of Yang's memory clips. It forms the heart of a sweet and subtle mystery that Kogonada delicately unpacks to reveal something unimaginably beautiful yet in its own way even more heartbreaking.

Kogonada's goal is to engage you emotionally and a key means of accomplishing it is through the visuals. There are subtle yet undeniably artful choices with things like color and aspect rations that help convey the film's solemn and soulful mood. Take the distinctions between Jake's world and Yang's memories. Jake is routinely surrounded by dim gloomy shadows accented by the dull glow of orange and blue neon -- a perfect way to convey his feelings of sorrow and detachment. Contrast that with Yang's memories where the colors grow richer and brighter and even the framing of shots lends to the sensation of innocence and wonder.

If I have one gripe, it's that I wish we were given a few more scenes with Yang prior to his malfunction -- scenes that would let us develop our own connections to him. Instead, we're solely dependent on pieces of memory from his family. It's enough, but I can only imagine the punch it would pack if we had been given more time to nurture our own feelings. It's a small gripe and hardly one worth dwelling on.

Despite its compelling sci-fi elements, "After Yang" is very much a quietly profound and gracefully subdued human drama. Loosely adapting an Alexander Weinstein short story, Kogonada uses his camera just as much as his script to pull us into his world and tell this metaphor-rich story. There's so much detail, from the East Asian influence guiding Alexandra Schaller's production design and Arjun Bhasin's costumes to the meticulously conceived compositions. And then there's the performances, all grounded and rooted in truth. Ultimately all of these pieces prove vital to the experience. And what an experience it is.