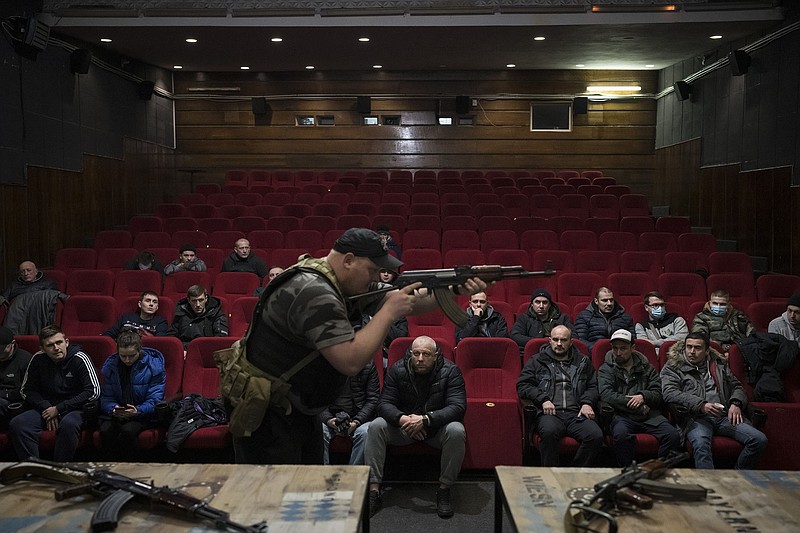 Some 14 wide-bodied aircraft transported an array of Javelin anti-tank missiles, rocket launchers, guns and ammunition to an airfield near Ukraine's border Friday, as the United States and European allies ramped up their efforts to give the Ukrainian military a leg up in battling a foreign enemy that far outguns it.

The top U.S. military adviser to President Joe Biden inspected the weapons transfer operation in an unannounced trip, meeting with troops and personnel from 22 countries who were working around the clock to unload the armaments for transport by land to the Ukrainian forces.

The U.S. weaponry, which included the Javelins as well as small arms and munitions, was part of a $350 million package that Biden authorized Saturday; within two days, one official said, the deliveries were landing at an airfield near the border that can process 17 airplanes a day. What began as a trickle, with only two or three planes arriving a day, is now a steady flow, the official said, with 14 loads from one airfield alone.

Gen. Mark Milley, chair of the Joint Chiefs of Staff, included a stop at the airfield as part of a trip to the region. As he spoke to troops, cargoes of Javelins rolled behind him. Nearby, two C-17s, the enormous cargo workhorses of the U.S. Air Force, sat on the tarmac.

The United States has delivered nearly 70% of the $350 million package to Ukraine's military, a senior Pentagon official said Friday. It expects to complete the entire shipment in the next week or so.

U.S. officials said the weaponry, equipment and other war materiel were being flown to neighboring countries like Poland and Romania and then shipped over land into western Ukraine to commanders for distribution across the country.

The weapons have quickly found their way into the hands of Ukrainian soldiers, who are using them to fight the advancing Russian force, U.S. officials said Friday.

"All of us have been tremendously impressed by how effectively the Ukrainian armed forces have been using the equipment that we've provided them," said the senior Pentagon official, who spoke on condition of anonymity. "Kremlin watchers have also been surprised by this, and how they have slowed the Russian advance and performed extremely well on the battlefield."

A special coordination cell reporting to the U.S. military's European Command in Stuttgart, Germany, is managing the torrent of weapons and equipment from the United States and at least 14 other countries, including Britain, Canada and Lithuania, the Pentagon official said.

Altogether, the United States has provided more than $3 billion in security assistance to Ukraine since 2014, when Russia first invaded parts of the country. About $1 billion of that has been sent in the past year, under the Biden administration.

Russian fighter-bombers and ground forces have not attacked the arms deliveries moving into western Ukraine. But U.S. analysts warn that could quickly shift, especially as Russian forces in the south and east have picked up momentum in recent days. A northern advance on Kyiv, the capital, and Kharkiv, Ukraine's second-largest city, remained largely stalled, Pentagon officials said.

The weapons also include rocket launchers from the Dutch, Javelins from the Estonians, Stinger surface-to-air missiles from the Germans, Poles and Latvians, and machine guns and rifles from the Czechs.

Ukraine is not only receiving weapons, but also donations in the form of cryptocurency. Ukraine has already spent $15 million of the donations it received in cryptocurrencies on military supplies, including bulletproof vests that were delivered Friday, according to Alex Bornyakov, deputy minister of Digital Transformation of Ukraine.

The Ukrainian government anticipates doubling the $50 million of crypto donated so far in the next two or three days, Bornyakov said Friday. Most of the donations have been in bitcoin and Ether.

The 250-person ministry has managed to find suppliers in Europe and the U.S. for everything from the vests to food packages to bandages and night-vision devices for army within two days after Russia invaded Ukraine on Feb. 24, Bornyakov said. About 40% of the suppliers are willing to take crypto. The rest are typically paid with crypto converted into euros and dollars, he said.

The ministry has also received donations in Tether, Polkadot and Solana, he said.

The ministry was formed two years ago, and was working to develop Ukraine's information-technology services industry, provide high-speed internet access throughout the country and to move all government services online.

The ministry's team has now refocused on supporting the country's digital infrastructure as it's being attacked, making sure the government's work is not interrupted, Bornyakov said. Gathering and using cryptocurrency donations is a part of its efforts as well.

It also received hundreds of NFTs, including a valuable CryptoPunk. NFTs, or non-fungible tokens, are a type of digital file closely related to cryptocurrency.

To raise additional funds, the ministry is now working with two companies that are designing an NFT collection that could be ready in less than two weeks, and would raise funds for the Ukrainian war effort, Bornyakov said. It's still up in the air if the edition will be limited, and what the NFTs will look like.

"No one was ready to do military NFTs, the war just started eight days ago, they are still trying to figure out how to do this in terms of design," he said.

The ministry has no plans to sell its donated CryptoPunk or others of the hundreds of donated NFTs any time soon. The CryptoPunk last sold a year ago for about 16.2 Ethers, worth over $43,000 in current prices.

Information for this article was contributed by Helene Cooper and Eric Schmitt of The New York Times and Olga Kharif of Bloomberg News (WPNS).