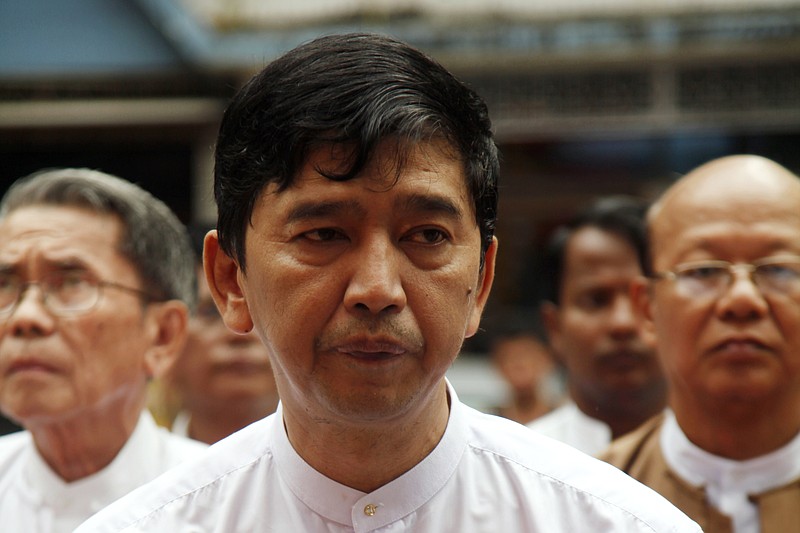 FILE - Min Ko Naing, a leader of Myanmar prominent 88 Generation Student Group, stands up during an inauguration ceremony of a free clinic to mark the 6th month since Win's death, Tuesday, Oct 21, 2014, in Yangon, Myanmar. Myanmar’s military ruling council has announced the revocation of the citizenship of Min Ko Naing and other top members of the main group coordinating resistance to army rule, who in turn dismissed the move with scorn on Saturday, March 5, 2022.(AP Photo/Khin Maung Win, File)

BANGKOK-- Burma's ruling military council has announced the revocation of the citizenship of top members of the main group coordinating resistance to army rule.

The announcement broadcast on state-run MRTV television on Friday said 11 leaders of the opposition have had their citizenship terminated because they had allegedly fled the country and harmed the national interest.

It targeted eight members of the National Unity Government, which views itself as the country's legitimate ruling authority, and three prominent activists.

The National Unity Government was established by elected legislators who were barred from taking their seats when the military seized power in February 2021, ousting the civilian government of Aung San Suu Kyi. Resistance to the takeover has now led to what some U.N. experts have characterized as a civil war.

At least two members of the unity government Cabinet named in the announcement responded on Saturday.

Aung Myo Min, the human-rights minister who has been traveling in Europe to seek support for Burma resistance movement, said the announcement was illegal because the military council is not the legitimate government.

The group's foreign minister, Zin Mar Aung, wrote that "Just because coupmakers pretending to be a government and strip away my citizenship does not make me love Myanmar less. They do not have the rights to strip people's citizenship away."

Burma is often called Myanmar, a name that ruling military authorities adopted in 1989. Opposition leader Suu Kyi and other regime opponents have refused to adopt the name change, as have the U.S. and Britain.

The other eight opposition Cabinet members named in the military's announcement have been charged with high treason, which carries a potential death penalty, and other political offenses.

The three activists were Min Ko Naing, a leader of a failed 1988 uprising against a previous military dictatorship, Eaint Poe Ou, also known as Pencilo, and Myo Yan Naung Thein.

The "Termination of Citizenship" announcement said it was issued according to the 1982 Burma citizenship law and that "similar perpetrators will be identified and prosecuted."