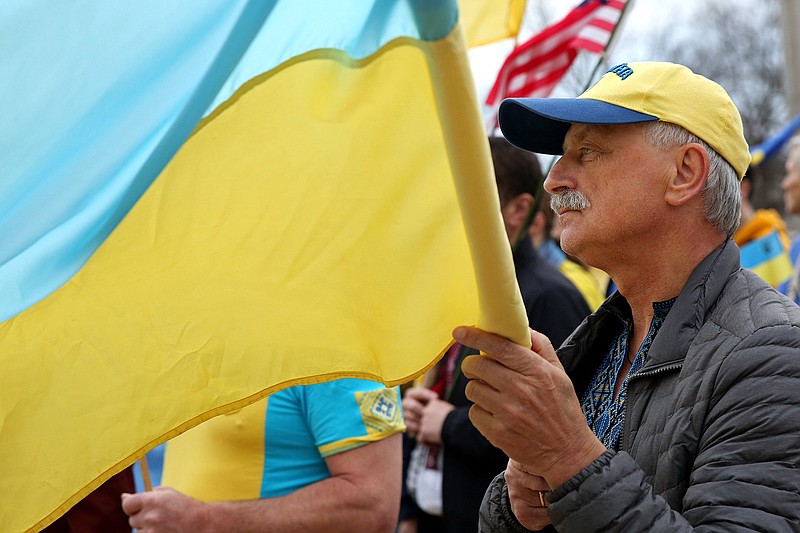 Ukrainian citizen Stepan Melnyk attends a rally in support of his country Saturday on the steps of the state Capitol in Little Rock. More photos at arkansasonline.com/306rally/. (Arkansas Democrat-Gazette/Colin Murphey)

Marina Amdream became emotional on the Arkansas Capitol steps as she read a poem written by her mother, who lives in the small Ukrainian city of Izyum.

Amdream, a life coach and a Ukraine native who has been in the United States for 13 years, organized a rally Saturday morning in support of her home country, under attack by neighboring Russia since Feb. 23. She said she expected about 20 people to show up, but more than 100 did, waving Ukrainian flags and carrying signs that said "Love not war" and "Cover the sky over Ukraine," among other things. Many also carried sunflowers, Ukraine's national flower.

Amdream was one of dozens of Ukrainians at the rally, and she read her mother's poem in Ukrainian and then in English.

"We have hope, we are united, we are praying for peace," she read. "We are going to forget all this like a nightmare, and we are going to end this bloody feast."

Russia has been bombing Izyum for four days, Amdream said, and she received a call from her mother on Thursday.

"She told me, 'I want you to know that I love you and I just called to say goodbye,'" Amdream said. "Can you imagine getting a phone call like that?"

She led the crowd in several chants, including "stop the war" and "protect Ukrainian children."

Local, state and national leaders have expressed support for Ukraine, which became an independent nation in 1991 when the Soviet Union dissolved. Both chambers of Congress and the Arkansas Legislature have passed resolutions supporting Ukraine, and the Little Rock Board of Directors will vote on its own resolution at Tuesday's special meeting.

On Feb. 28, Arkansas Gov. Asa Hutchinson condemned Russia's invasion of Ukraine and ordered state agencies to ensure "that we as a state are not indirectly supporting Russian aggression through its economy," according to a statement from Hutchinson's office.

Jeff Pitchford, the Arkansas Farm Bureau's state government liaison, told the rallygoers he was glad to see such action from the state. His wife, Kateryna, grew up in Dnipro, Ukraine, and has been in the U.S. for 18 years.

Pitchford, an Arkansas native, said he has appreciated the times he has visited his wife's home country.

Pitchford wore a T-shirt bearing a picture of Ukrainian President Volodymyr Zelenskyy and the quote, "I need ammunition, not a ride," Zelenskyy's response to U.S. President Joe Biden's offer to help him leave the country when his life was directly under threat.

Kateryna Pitchford said she met with Hutchinson on Thursday to pray for Ukraine, and she shared the same prayer with Saturday's audience. She read the Lord's Prayer in Ukrainian and then recited a Bible verse, Joshua 1:9: "Do not be afraid or discouraged, for the Lord your God is with you wherever you go."

"The Ukrainian army is fighting very hard, and I feel that all our prayers matter, that the Ukrainian people will win this war and God will protect them," she said.

The rally's speakers, including Ukraine native Maryna Jackson, urged attendees to call their members of Congress and ask them to support a no-fly zone over Ukraine, which would prevent Russia from bombing the country from above. So far NATO has refused to implement a no-fly zone.

Jackson said her nieces are fleeing Ukraine, but their father is staying to fight.

"I ask how you would feel if you had to leave your husband or father behind because there was no other choice, knowing that you might never see him again," Jackson said.

The current invasion of Ukraine is not the first from Russian President Vladimir Putin, who annexed the Ukrainian territory of Crimea in 2014.

Vilii Klyashtorny was a child growing up in the Ukrainian city of Fastiv when the Germans took over. Now approaching 90 years old, Klyashtorny was visiting his daughter and son-in-law in Arkansas when Russia invaded his homeland.

He will be staying for the foreseeable future, his son-in-law Slav Redko, said, and they attended Saturday's rally together.

"He never thought that he would see a war [in Ukraine] again, and now Russian fascists behave as the Germans did 80 years ago," said Redko, translating for Klyashtorny, who does not speak English.

Jim Stanley, a lawyer and an Army veteran who served in the Vietnam War, told Redko and Klyashtorny that he stands with Ukraine.

Stanley told the Arkansas Democrat-Gazette that the images of debris and wreckage caused by Russia in Ukraine are a stark example of "the human cost of war," more than what he witnessed for over a year in Vietnam.

He also said he hopes Russia is held accountable for its actions. 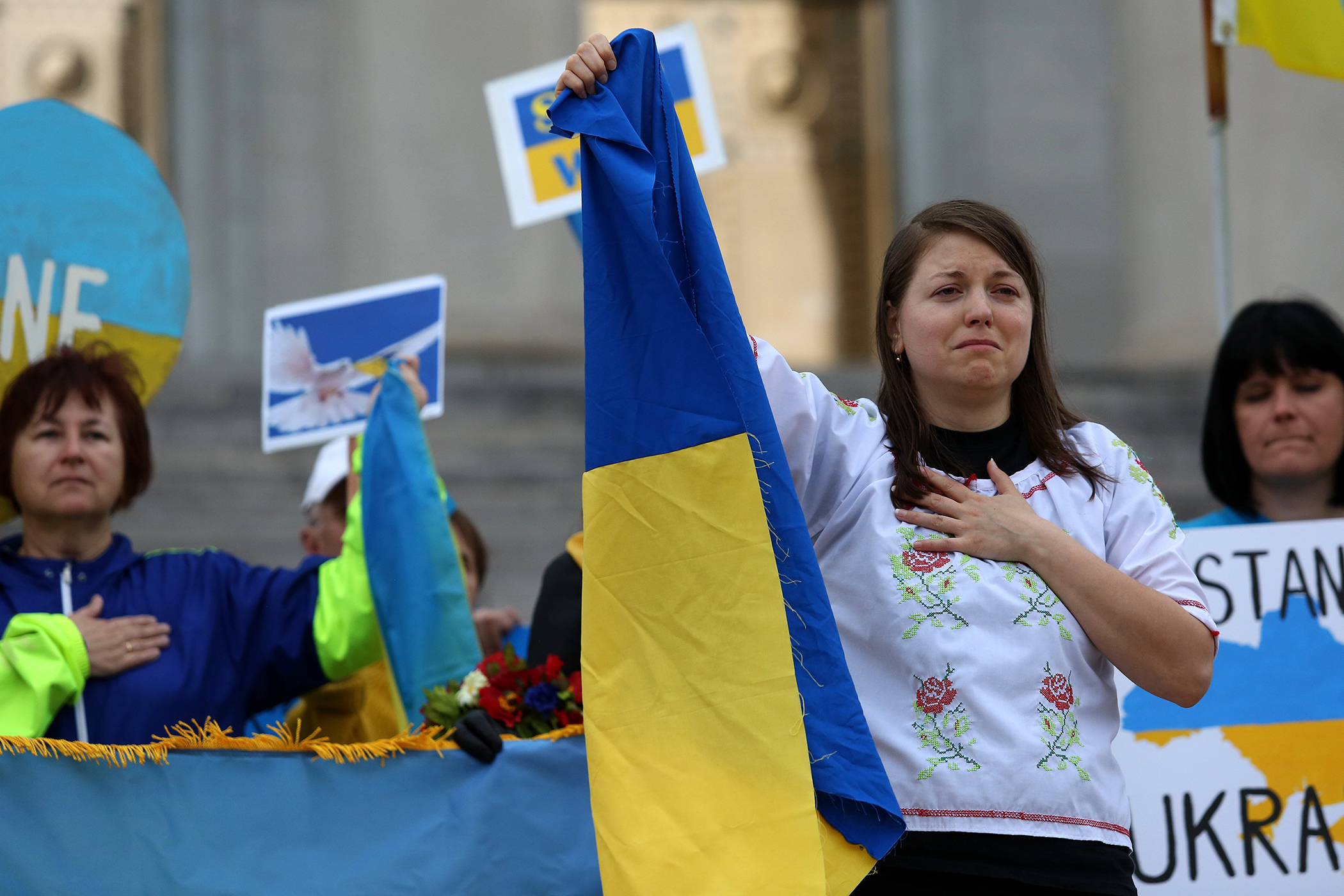 Marina Amdream (right) leads a rally in support of Ukraine on the steps of the state Capitol in Little Rock on Saturday. (Arkansas Democrat-Gazette/Colin Murphey)

Gallery: Rally in support of Ukraine