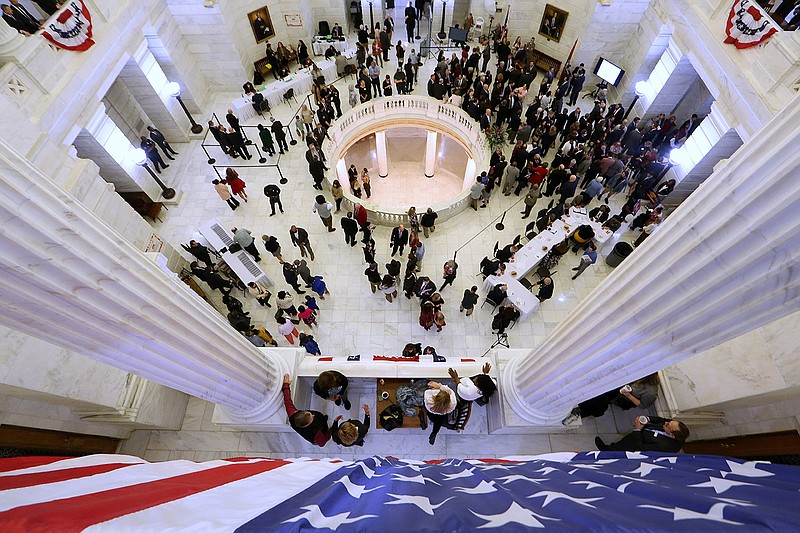 Candidates fill the Capitol rotunda during the first day of candidate filing on Tuesday, Feb. 22, 2022, at the state Capitol in Little Rock. (Arkansas Democrat-Gazette/Thomas Metthe)

In state legislative races, voters will see more Republican primary elections this spring than general elections with candidates from both major parties in November, with GOP candidate filings again surpassing those of Democrats in the filing period that ended last week.

A total of 446 candidates filed to put their names on the ballot for 2022 elections, which is the highest number for any election year without a presidential race since at least 1980, according to Arkansas Democrat-Gazette archives and information from the secretary of state's office.

The GOP took control of the Arkansas Legislature after the 2012 elections, and the party now holds a supermajority in the body as well as all of the state constitutional and congressional offices.

Republican Party of Arkansas Chairwoman Jonelle Fulmer said the party saw a record number of candidates seek to run for state and federal offices during the filing period, which ran from Feb. 22 to Tuesday.

"It's obvious that our principles are truly representative of the state," she said in a statement last week. "I look forward to a busy primary season and an overwhelmingly Red Arkansas in November."

All 135 seats in the Legislature are up for election this year because of redistricting -- the decennial process of redrawing the areas that members represent -- but only 48 of those races will have candidates from both major parties. There are 26 sitting Republican legislators who will face primary challengers in their reelection bids, and there will be 51 Republican legislative primaries in total.

"I think that really is probably where the competitive racing is and where money and attention will go," Republican political consultant Robert Coon said.

He added that it was too soon to tell which Republican incumbents in the Legislature might be vulnerable to losing to a primary challenger.

Janine Parry, a professor of political science at the University of Arkansas, Fayetteville, said she expected the GOP to maintain its supermajority in the Legislature.

"I suspect we haven't hit the Republican ceiling in Arkansas, or that the Democrats haven't yet found the basement," she said.

Democratic Party of Arkansas strategic director Will Watson said in a tweet last week that Democrats had fielded candidates in 70% of the 25 biggest cities in Arkansas. In an interview before the filing period, Watson said the party was looking to run candidates in growing and diversifying urban and suburban areas where voters are "fed up" with Republican policies.

Meanwhile, a record number of Libertarians filed to put their names on the ballot. Libertarian Party of Arkansas Chairman Michael Pakko said the party is trying to maintain ballot access by surpassing the 3% threshold of voters for their gubernatorial candidate, Ricky Dale Harrington. Under state law, the party is considered a new political party and gained ballot access by petition.

"Every year we try to improve our game and get more candidates on the ballot," he said.

Pakko added that the party wants people to get used to seeing Libertarians on the ballot, and to give people a choice in races where there would be no general election opponent otherwise.

There are a total of 199 state and federal offices up for election this year, including the governorship, the other six state constitutional offices, all four seats in the U.S. House, and one of the state's two U.S. Senate seats.

Arkansas governors are limited to two four-year terms, and this year will be the first since 2014 to feature a governor's race without an incumbent.

Twelve candidates have filed for the governor's race.

All four of Arkansas' incumbent U.S. House members filed to run for reelection, and all have primary opponents except for U.S. Rep. Bruce Westerman. All have Democratic opponents.

U.S. Sen. John Boozman faces three Republican challengers in the primary: Jan Morgan, Jake Bequette and Heath Loftis. All three have described Boozman as a "RINO," or Republican in name only.

Coon said that polling has shown Boozman having low favorability numbers -- driven by the fact that he keeps an understated profile and that people who aren't familiar with him may not know who he is or what he stands for -- but his numbers among Republicans are still good.

The primary election and nonpartisan judicial election is May 24. The final day to register to vote in those races is April 24.