Report: Arkansas, with a 24.9% increase, had third highest rise in traffic fatalities nationwide in 2020 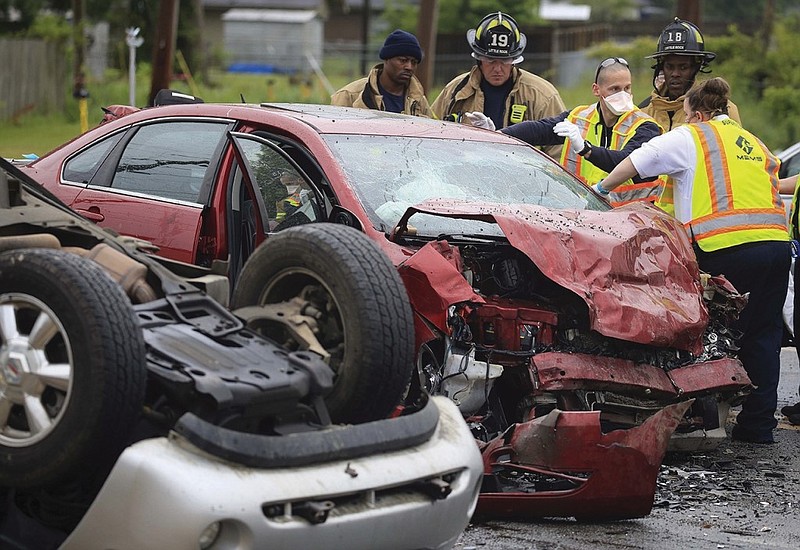 Emergency personnel work to remove the driver of one of two cars involved in a wreck at the intersection of Chico Road and Eagle Drive in Little Rock in this May 12, 2020, file photo. (Arkansas Democrat-Gazette/Staton Breidenthal)

Arkansas had the third-highest increase in fatal car crashes nationwide in 2020, according to a new report from the National Highway Traffic Safety Association.

While the number of fatal car crashes increased nationwide, the increase was particularly dramatic in Arkansas, which saw a 24.9% rise, only behind the District of Columbia and Vermont.

The increase in fatal crashes came during a year when fewer people were on the roads driving. With pandemic restrictions in place on businesses, many people worked from home and stayed away from bars and restaurants.

Nick Chabarria, a spokesman for AAA, said reckless drivers increased their bad habits by taking more risks with fewer cars on the road. Chabarria cited a report the agency released on Feb. 28, concluding more drivers were speeding, distracted, driving while impaired or driving without a seatbelt in 2020.

"Though there were less drivers on the road overall, the drivers who were traveling through much of 2020 were engaging in more risky driving behavior," Chabarria said.

Arkansas State Police Director Bill Bryant told state lawmakers in July the increase in fatal car crashes is partially because of an increase in the number of drivers speeding at over 100 miles per hour, which state police refer to as "aggravated driving,"

"Some of them are for over 160 miles per hour," Bryant said.

Bill Sadler, a spokesman for Arkansas State Police, said finding a reason why fatal car wrecks were up in Arkansas was "somewhat of an impossibility," given each crash has its contributing factors which may differ.

"Have you ever looked at a motor vehicle crash investigation report? There are always -- there's always -- a list of contributing factors," Sadler said.

Sadler said Arkansas State Police tracks car crash statistics with other states saying "there is never any common denominator" as to why one state has more fatal car crashes than another.

"There is rarely any explanation as to why one state might have more fatalities in one particular year as compared to the year previous or the year that follows," Sadler said.

Dave Parker, a spokesman for the Arkansas Department of Transportation, said the agency was hard-pressed to find a reason as to why fatal car crashes were up in 2020, saying the number of intoxicated, speeding and distracted driving wrecks went up as the percentages they make up in total crashes stayed the same.

Parker also said some data is hard for police to report and makes it hard for transportation officials to track.

"Distracted driving and speeding are not well captured on the crash report as an officer has to have overwhelming evidence of this, such as an admission by the driver, passenger or a witness before they will list this on the report," Parker said in an email.

"The rising fatalities on our roadways are a national crisis; we cannot and must not accept these deaths as inevitable," said U.S. Transportation Secretary Pete Buttigieg said in a statement.

In total there were 638 fatal car crashes in Arkansas in 2020, compared with 511 in 2019. Of the fatal wrecks, 26.7% were speeding-related. Alcohol-impaired wrecks also accounted for 26% of fatal crashes in Arkansas, according to the report.

Like AAA, the report from the National Highway Traffic Safety Administration blamed speeding, alcohol-impaired driving and seat belt non-use as the main reason for fatal car wrecks, but said "we cannot say that these factors were the only ones contributing to the rise in fatalities."

Increased car crashes were phenomena limited to the U.S., according to AAA, as most high-income countries reported fewer roadway deaths in 2020 than in 2019.