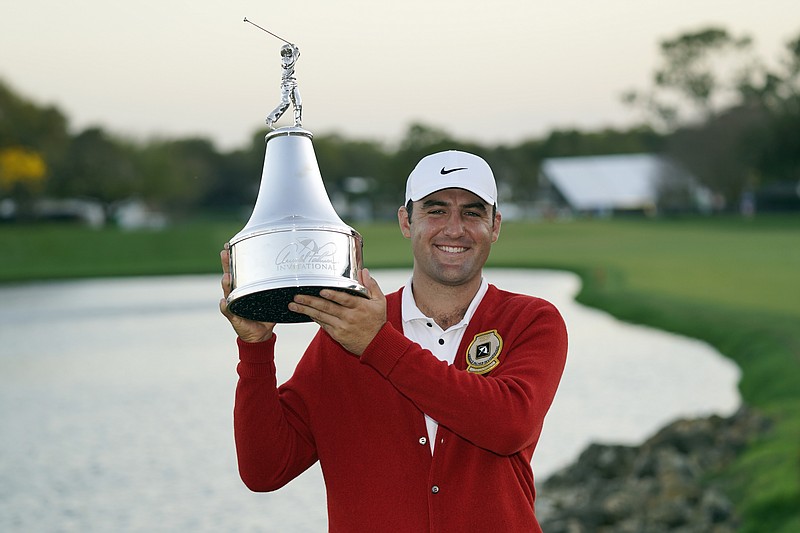 ORLANDO, Fla. -- Scottie Scheffler isn't sure he won the Arnold Palmer Invitational as much as he survived it.

Over the final four holes Sunday at Bay Hill, he had to get up-and-down from 149 yards in rough covering the tops of his shoes, and from 67 yards over the water to a back pin on the third-easiest hole.

The two conventional pars that followed were just as scary, one from 45 feet and the other from about 70 feet, on greens with barely enough grass to keep the ball from sliding, knowing a gust could send the ball an extra 8 feet.

Scheffler answered every challenge. He closed with a bogey-free back nine at Bay Hill and an even-par 72 for a one-shot victory, his second on the PGA Tour in a month. He moved to No. 5 in the world.

"To be completely honest with you, right now I'm exhausted," Scheffler said. "This course is a total beat-down trying to play. I'm very pleased I didn't have to play any extra holes."

Viktor Hovland (74) missed an 18-foot birdie putt from the fringe on the 18th. Billy Horschel (75) missed a 30-foot birdie in the final group, both trying to force a playoff. They finished one shot behind, along with Tyrrell Hatton, who had a 69 and finished an hour earlier.

Scheffler didn't win the U.S. Open. It just felt like one.

"I feel punch drunk, to be honest," Rory McIlroy said after a 76-76 weekend. "It's like crazy golf. You just don't get rewarded for good shots. ... The way the conditions are, it makes you feel as if you're not playing as good as you are."

Only a few birdies on the par-5 16th and pars on the 18th kept this from being the toughest final round at Bay Hill in four decades. The average score was still 75.48. Six players shot 80 or higher and only four players broke par.

Gary Woodland had as good a chance as anyone until he took two shots to get out of a tough lie in the bunker and made double bogey on the par-3 17th, and then finished with a bogey. He was two shots behind.

"I'm glad I'm off that golf course," Woodland said. "Frustrating. I played a lot better than the score showed. I can take a lot of positives, but it stings right now."

Scheffler now has two PGA Tour titles in his last three starts, having picked up his first victory at the Phoenix Open. That one was loud, and he had to make birdies to stay in the mix. This one was stressful, and no less rewarding. Outside of the par 5s, "you're trying to just make a par on every other hole," Scheffler said.

Stress was abundant for everyone. Scheffler was tough as nails.

He was in deep trouble on the 15th, in the pine straw and behind a tree, when he tried to hit a punch hook up the fairway. The ball dribbled out into thick rough, he did well to get that onto the front of the green and then made a 20-footer for par.

On the par-5 16th, Scheffler caught a terrible break when his drive hopped out of the sand and into a lie so awkward in the collar that he couldn't get it back to the fairway. Then, he had to lay up to avoid going into the water. He hit wedge to 6 feet and saved par.

His final two holes, not nearly as theatric, were no less important.

"It's not really a comfortable position having to hit it to 50 feet and try and two-putt with the lead," he said. "But I just trusted myself and played conservative the last two holes. And pars were enough."

Horschel shot 40 on the front nine and never caught up, though he made a series of par putts to at least have a chance at the end. He had shared the 54-hole lead with Talor Gooch, who went out in 43.

The real heartbreak went to Woodland, trying to win for the first time since the U.S. Open at Pebble Beach. Steady all day, he surged into the lead with a 6-iron shot from a sandy lie, around the trees and onto the green at the 16th, where he made a 25-foot eagle putt.

But on the 17th, he took two shots to get out of a front bunker and then missed a 5-foot putt, taking double bogey. He found the left rough off the 18th and closed with a bogey to finish in a tie for fifth with Chris Kirk.

Kirk was right there with a chance at 5 under with a birdie on the 13th. He three-putted the 14th for the first of two consecutive birdies and closed with three pars for a 72.

The consolation prize for Kirk was earning one of three spots available for the British Open at St. Andrews this summer. Gooch salvaged his rough start with a bogey-free back nine to finish in the top 10 and earn his spot in the Open.

Players had to finish among the top 10 to get into St. Andrews. Graeme McDowell was poised to get the last spot until a double bogey and bogey over his last three holes for a 76, dropping him two spots out of the top 10.

Former University of Arkansas golfer Taylor Moore finished in a tie for 42nd place. Taylor shot a 77 on Sunday to finish at 7-over 295.

SINGAPORE -- Jin Young Ko lived up to her billing as the No. 1 player in women's golf by starting her LPGA Tour season with a two-shot victory in the HSBC Women's World Championship, her sixth win in her last 10 starts.

The South Korean star set an LPGA Tour record with her 15th consecutive round in the 60s and her 30th sub-par round.

Ko, who won the CME Group Tour Championship in November to close out last season, had been home for three months before intensive practice sessions in Palm Springs, Calif. She finished at 17-under 271 on the Tanjong course at Sentosa Golf Club.

Jeongeun Lee6 was tied with Ko until a double bogey on the final hole for a 69. She tied for fourth with Attaya Thitikul of Thailand, who had a 67.

Former University of Arkansas golfer Gaby Lopez shot a 70 on Sunday and posted a 7-under 281 for the tournament. Stacy Lewis (Razorbacks) shot a 68 on Sunday and finished at 4-under 284.

With wife Chelsey at his side as his caddie, the 35-year-old Brehm birdied five of the first 11 holes at windy and rainy Grand Reserve and beat Max McGreevy by six strokes.

Three-strokes ahead entering the day, Brehm shot a 5-under 67 to finish at 20-under 268 in the make-or-break start on a minor medical extension. He got the one-tournament extension after he had to withdraw from the Zuruch Classic last year because of covid-19.

With the event played opposite the Arnold Palmer Invitational in Orlando, Fla., Brehm received a two-year exemption and a spot in the PGA Championship, but will not be exempt for the Masters. The 6-4 former Michigan State player won in his 68th start on the tour. He's ranked 773rd in the world.

NEWPORT BEACH, Calif. -- Retief Goosen holed out for eagle from a greenside bunker on the short par-4 first hole, birdied the next two and cruised to an 8-under 63 and a four-stroke victory in the Hoag Classic.

A stroke behind fellow South African star Ernie Els entering the round, Goosen pulled away quickly at Newport Beach Country Club in breezy but calmer conditions than the players faced Saturday.

After hitting his opening drive into the left bunker, Goosen's long blast hit the flagstick and dropped in the cup without touching the green.

NAIROBI, Kenya -- Ashun Wu of China closed with a 6-under 65 as he turned a four-shot deficit into a four-shot victory in the Magical Kenya Open on the European Tour.

Wu ended 66 events worldwide without winning since he captured the KLM Open in 2018. He won for the fourth time on the European Tour.

Ewen Ferguson of Scotland lost his 54-hole lead by closing with a 76. That created an opportunity for Wu, and he bolted ahead with a superb short game. 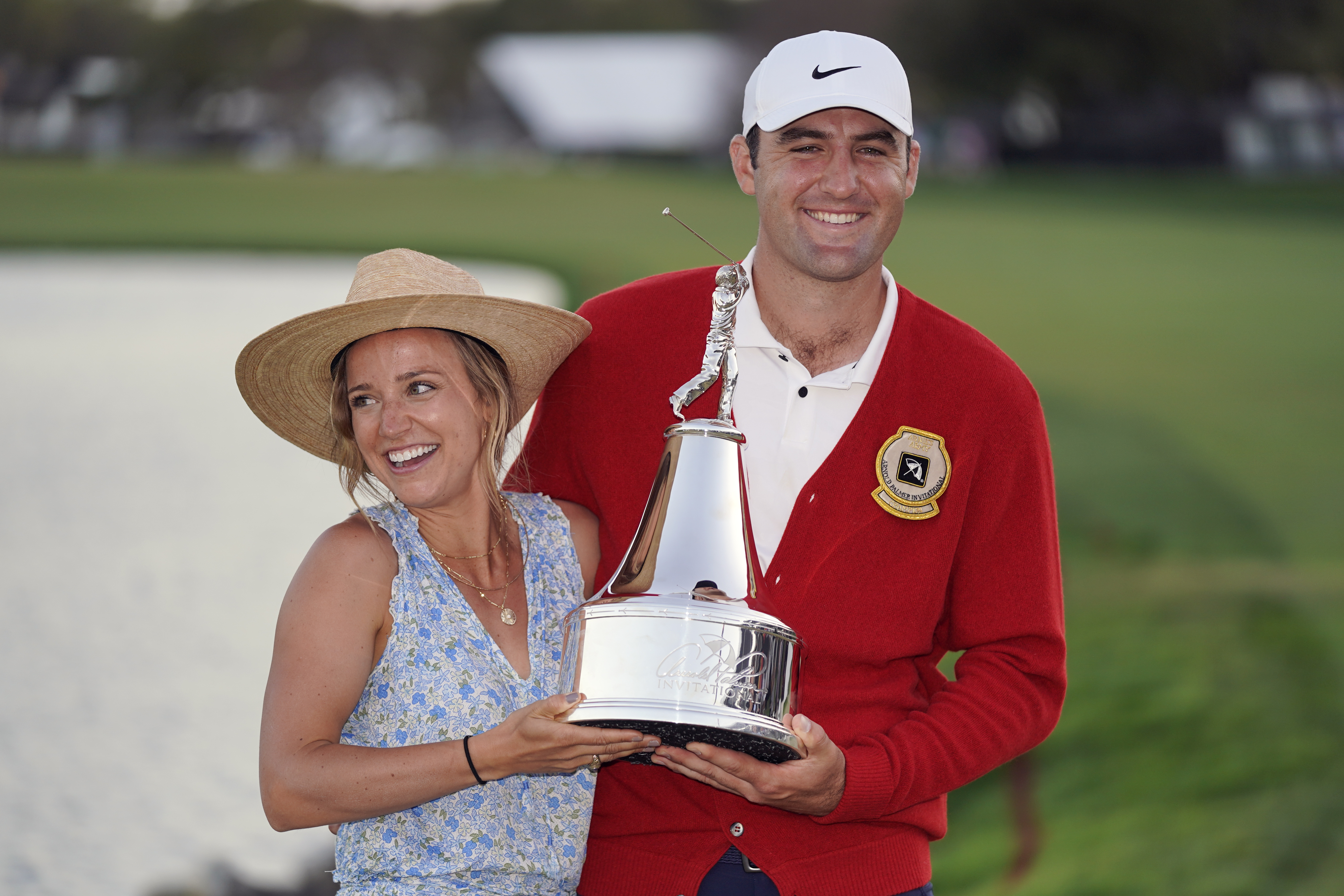 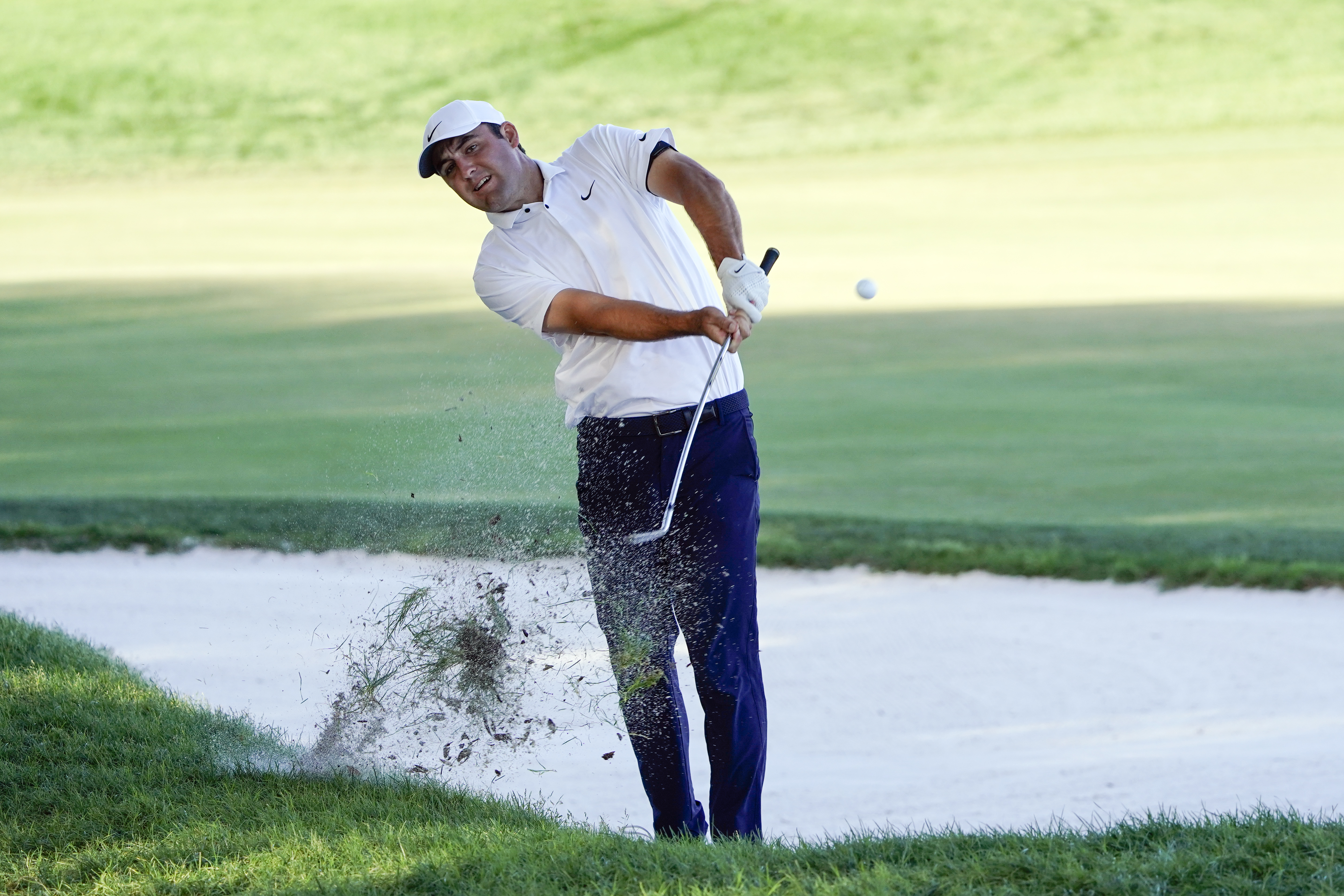 Scottie Scheffler hits from off the 16th fairway during the final round of the Arnold Palmer Invitational golf tournament Sunday, March 6, 2022, in Orlando, Fla. (AP Photo/John Raoux) 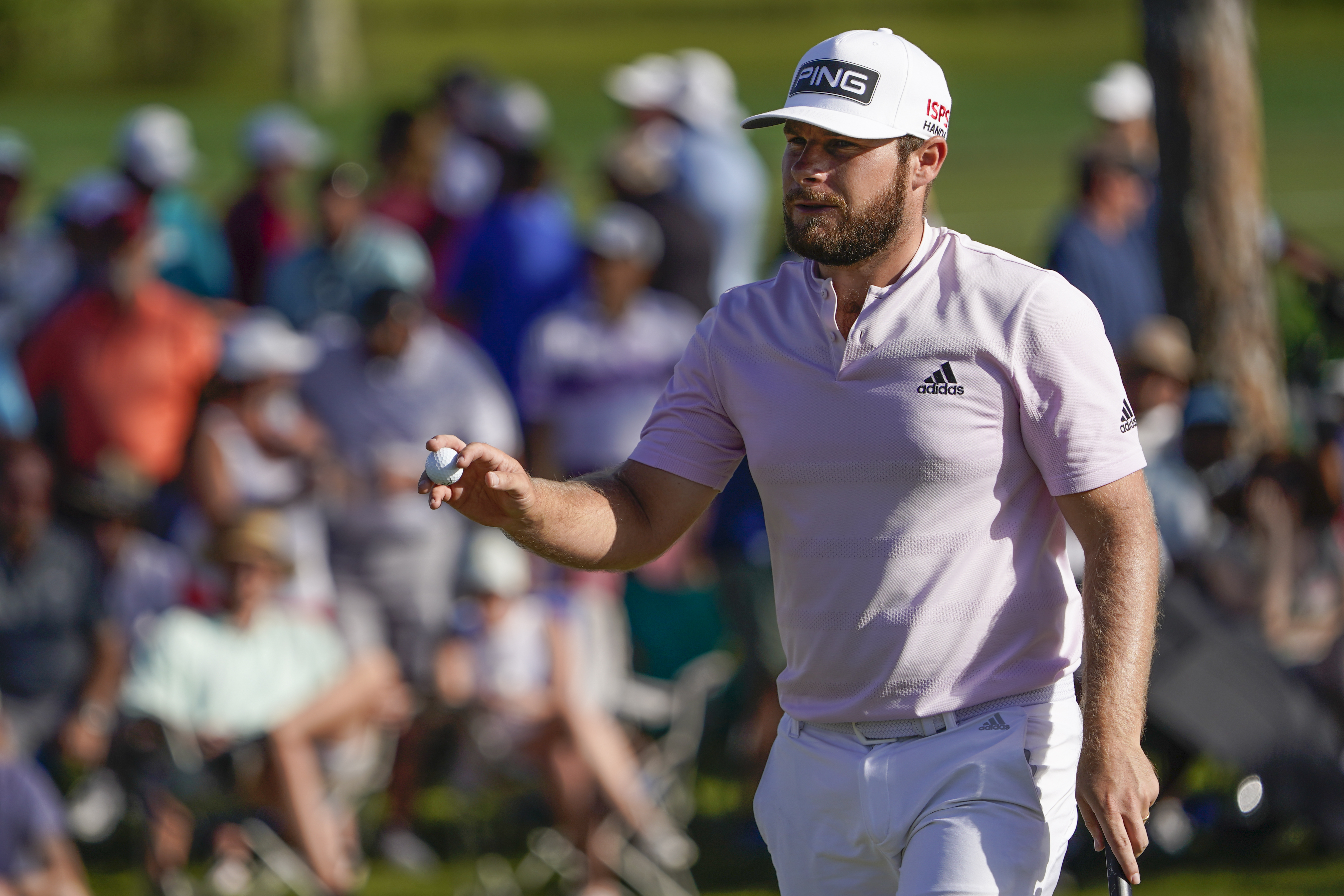 Tyrrell Hatton, of England, holds up his ball after putting on the 17th green during the final round of the Arnold Palmer Invitational golf tournament Sunday, March 6, 2022, in Orlando, Fla. (AP Photo/John Raoux) 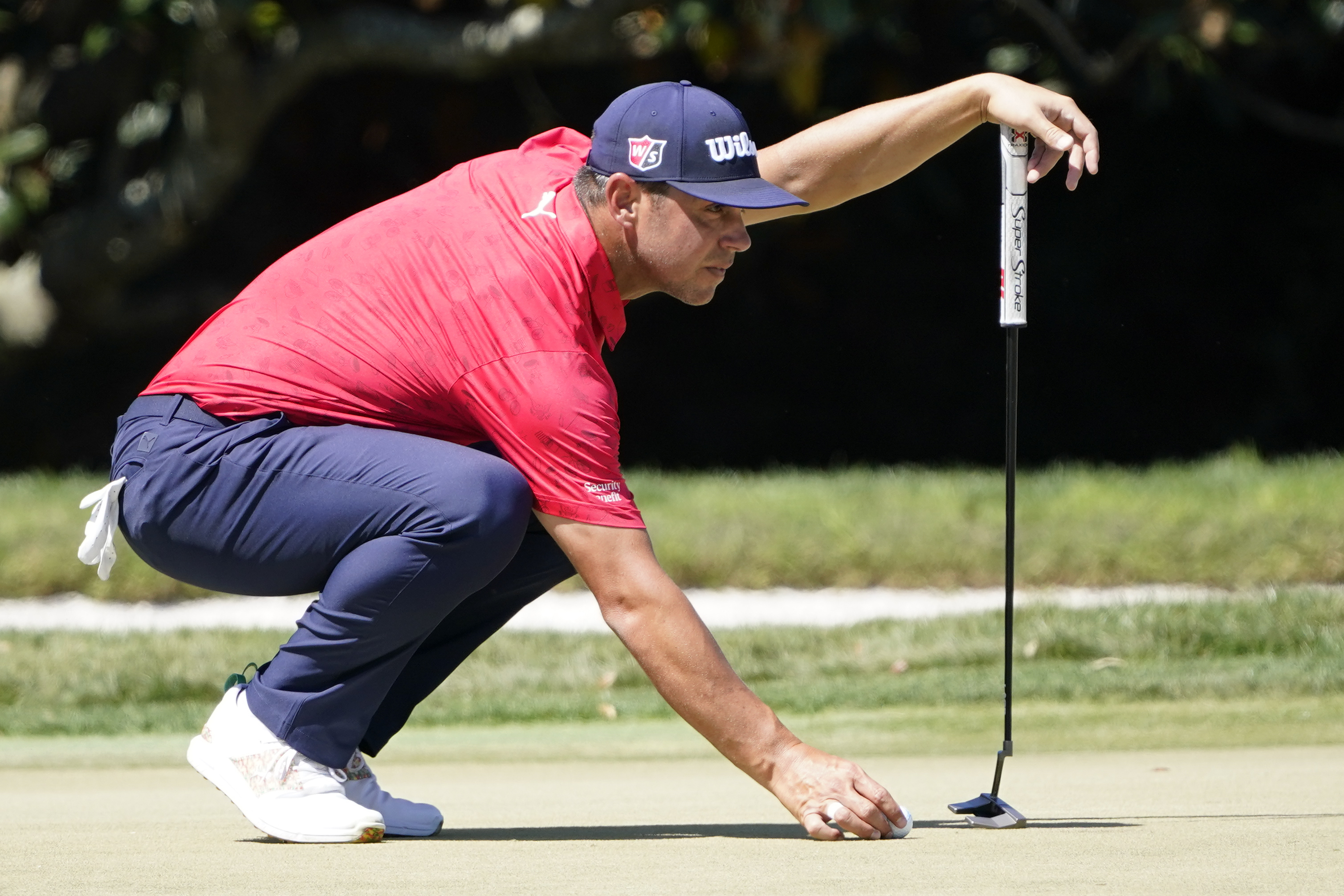 Gary Woodland lines up a putt on the first green during the final round of the Arnold Palmer Invitational golf tournament Sunday, March 6, 2022, in Orlando, Fla. (AP Photo/John Raoux) 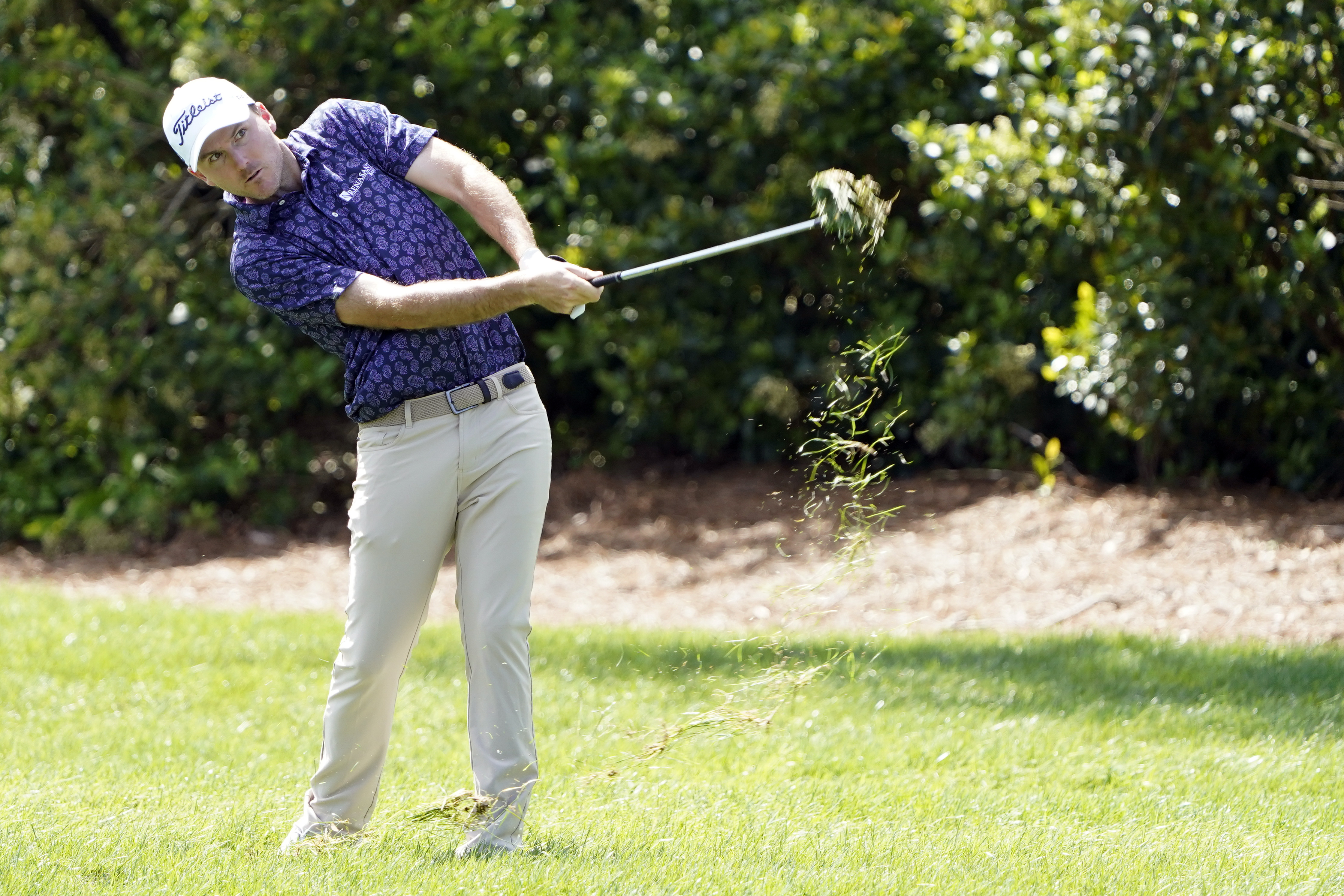 Russell Henley hits from the first fairway during the final round of the Arnold Palmer Invitational golf tournament Sunday, March 6, 2022, in Orlando, Fla. (AP Photo/John Raoux) 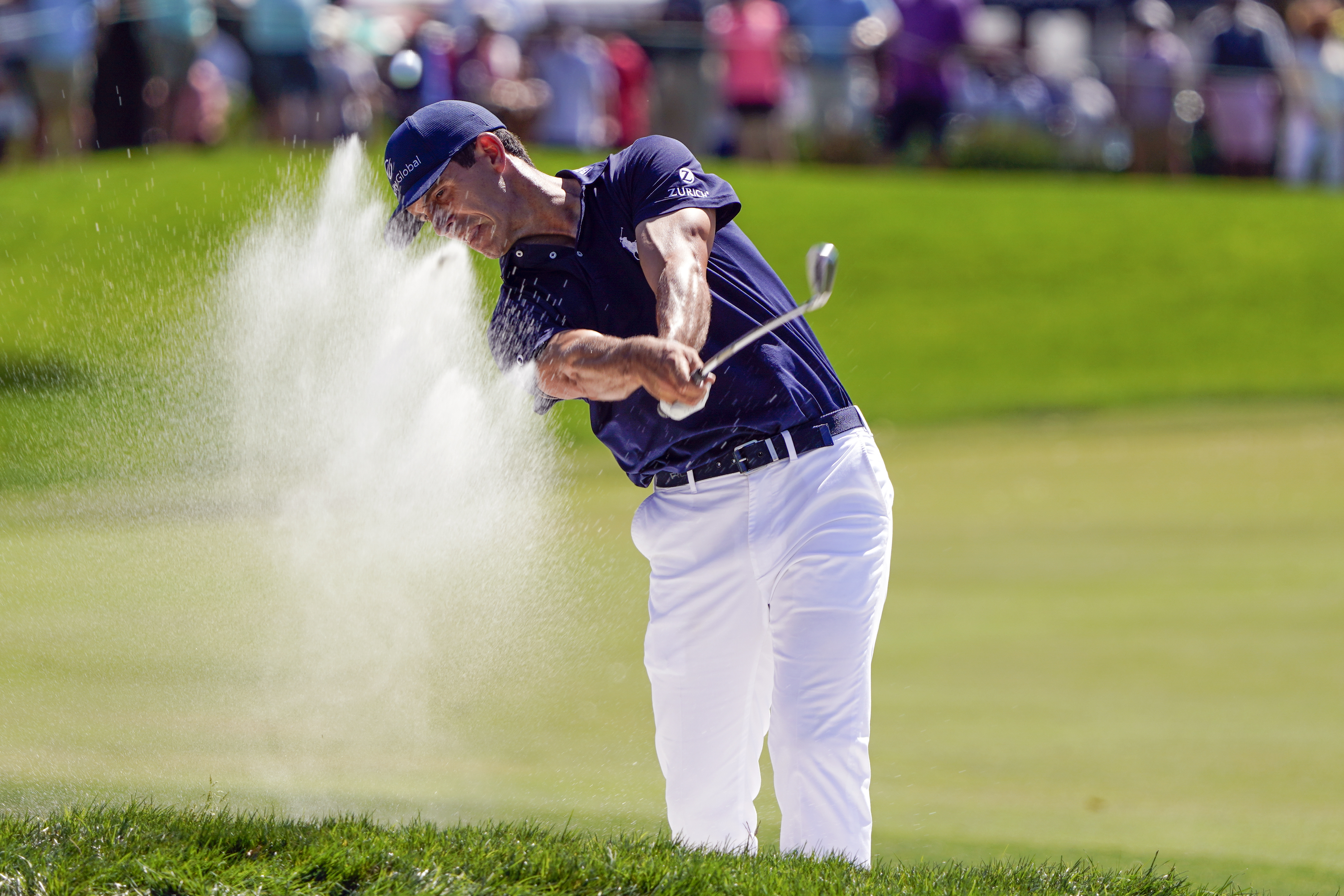 Billy Horschel hits from a sand trap on the first fairway during the final round of the Arnold Palmer Invitational golf tournament, Sunday, March 6, 2022, in Orlando, Fla. (AP Photo/John Raoux) 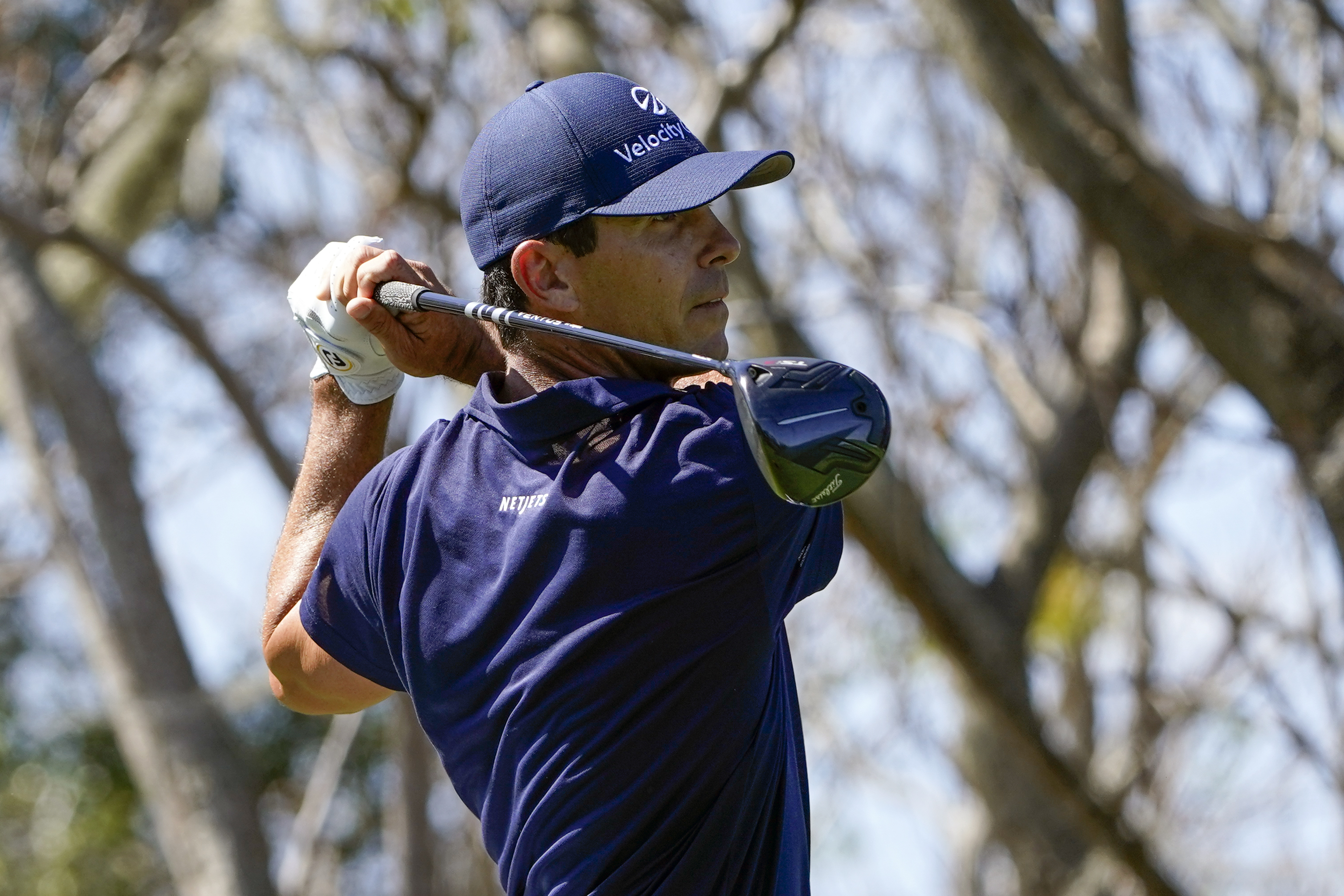 Billy Horschel hits a tee shot on the third hole during the final round of the Arnold Palmer Invitational golf tournament, Sunday, March 6, 2022, in Orlando, Fla. (AP Photo/John Raoux) 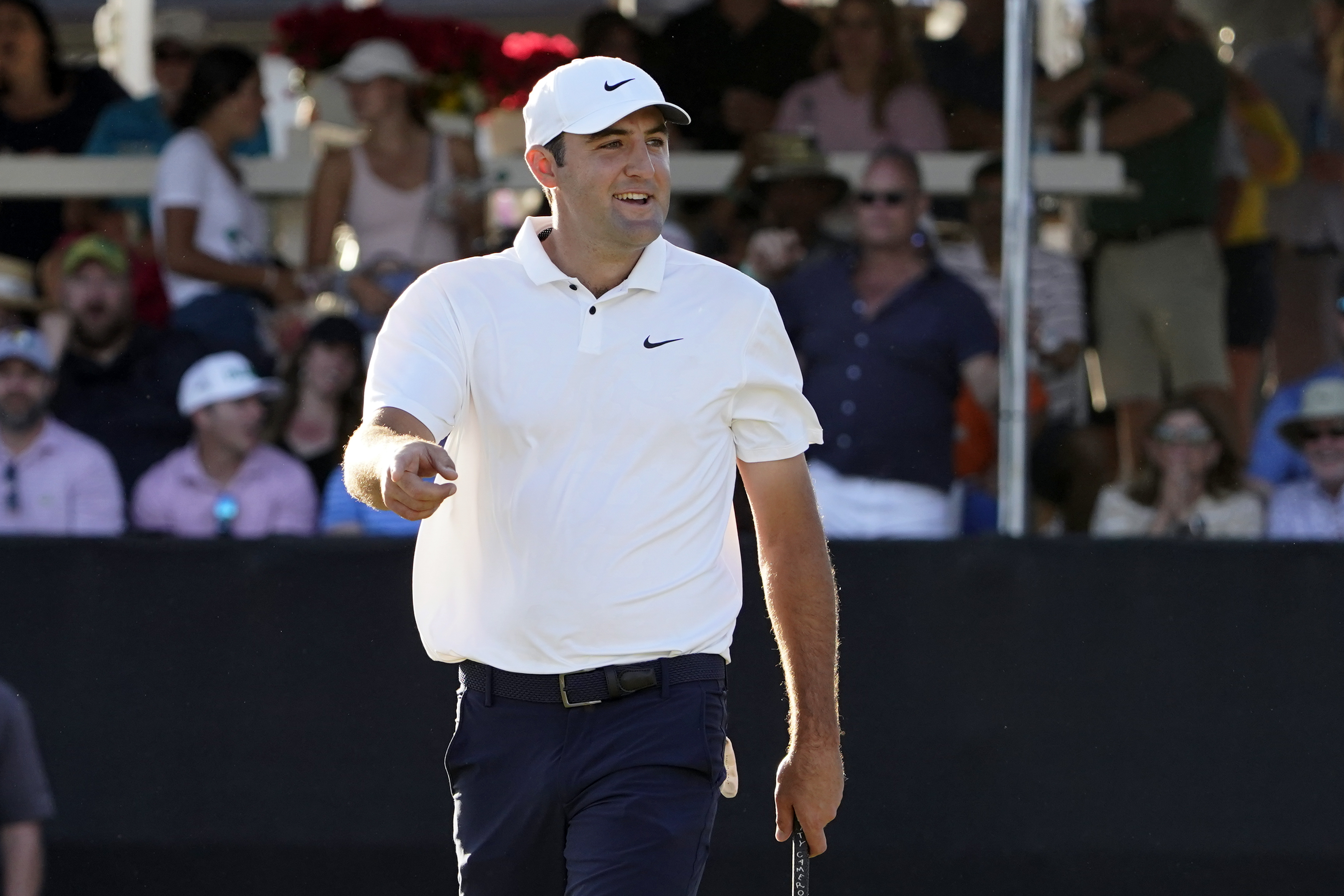 Scottie Scheffler points to his ball and smiles as it stops inches from the cup on a birdie putt attempt on the 17th green during the final round of the Arnold Palmer Invitational golf tournament, Sunday, March 6, 2022, in Orlando, Fla. (AP Photo/John Raoux) 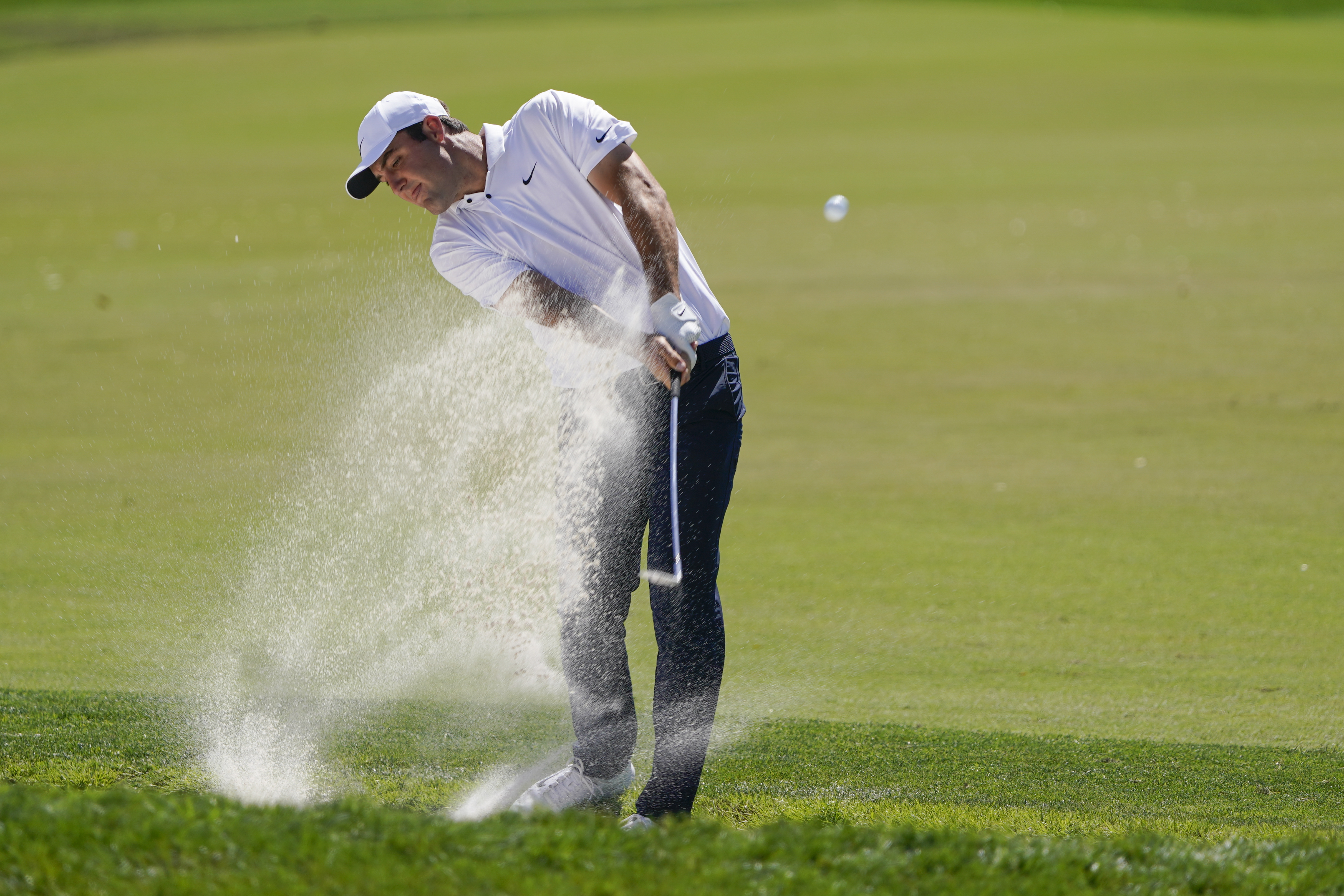 Scottie Scheffler hits from a sand trap on the first fairway during the final round of the Arnold Palmer Invitational golf tournament Sunday, March 6, 2022, in Orlando, Fla. (AP Photo/John Raoux)