State lawmakers OK $6B budget, send it for governor’s signature 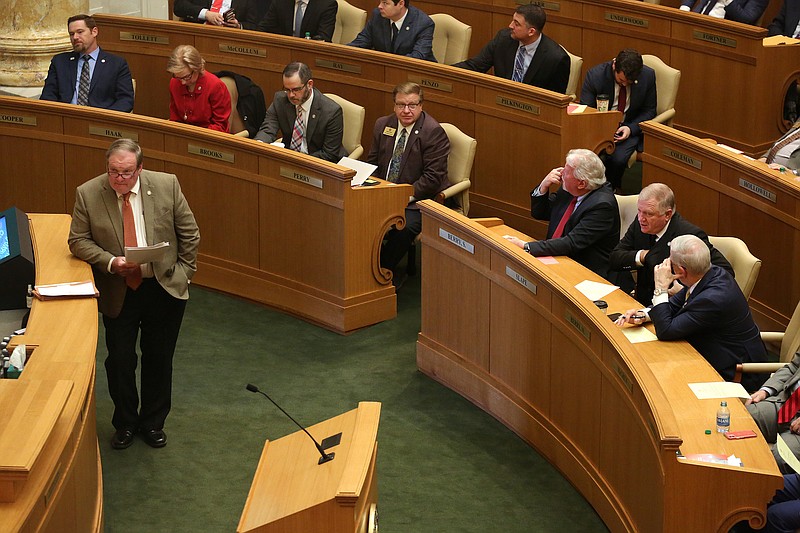 Rep. Lane Jean (left), R-Magnolia, waits for a vote on budget bills during the House session on Tuesday, March 8, 2022, at the state Capitol in Little Rock. .More photos at www.arkansasonline.com/39lege/.(Arkansas Democrat-Gazette/Thomas Metthe)

Identical proposed Revenue Stabilization Acts authorizing a $175.1 million increase in the state's general revenue budget to $6.02 billion in the coming fiscal year sailed through the Arkansas House of Representatives and Senate on Tuesday.

Gov. Asa Hutchinson doesn't expect to veto any bills or parts of bills that the House and Senate sent to him during the fiscal session, Hutchinson spokeswoman Shealyn Sowers said afterward.

State Rep. Josh Miller, R-Heber Springs, who was the only lawmaker to vote against SB101 and HB1117, said he supports many parts of the the proposed general revenue budget, including increased funding for law enforcement, but there was enough that he didn't agree with that he felt he couldn't vote for the the identical bills.

He said he voted against the proposed Revenue Stabilization Acts because he opposes the Medicaid expansion program that provides health care coverage to more than 300,000 low-income Arkansans, and he opposes giving more state funds to the state's higher education institutions, while tuition for students increases and some of the institutions are using funds to hire "what I consider to be immoral folks to come in and indoctrinate our students with transgender and that type of stuff." He didn't name any particular schools.

The $6.02 billion general revenue budget for fiscal 2023, under the current revenue forecast for that fiscal year, is projected to leave a general revenue surplus of $193.9 million at the end of fiscal 2023 before up to $50 million of that surplus goes to the state Department of Transportation for highways, said Kevin Anderson, an assistant director for the Bureau of Legislative Research.

Priorities for general revenue funding of programs are set in the Revenue Stabilization Act, which is enacted every year by the Legislature and the governor and keeps the state from deficit spending. The state's two largest sources of general revenue are individual income taxes, and sales and use taxes.

The proposal would create two categories for spending priorities in fiscal 2022: A and B.

Category A, the highest priority, would be allocated $5.685 billion. Category B would be allotted $338.5 million.

Legislative leaders said the state's general revenue forecast for fiscal 2023 would fully fund Category A and Category B in the proposed Revenue Stabilization Act.

Both increases are in line with the educational adequacy recommendations made by the House and Senate education committees.

The proposed Revenue Stabilization Act also would increase the general revenue allocation for the Department of Human Services by $46.3 million, or 2.5%, to $1.82 billion, according to Bureau of Legislative Research records. Hutchinson initially proposed a $66.3 million increase for the department to $1.84 billion.

The proposal would increase the general revenue allocation for the Department of Human Services' grants account, including Medicaid, by $23.5 million, or 1.7%, to $1.39 billion, Bureau of Legislative Research records show. Hutchinson initially proposed a $43.5 million increase in the general revenue budget for grants to $1.41 million.

Senate Bill 54 -- which cleared the House on Monday -- would set aside the first $37.6 million of funding allocated to the Department of Human Services' grant account to be used for Hutchinson's plan to reduce the waiting list of developmentally disabled people. In mid-December, Hutchinson unveiled his plan to provide services by June 2025 to the 3,204 people on the state's waiting list for people with intellectual and developmental disabilities who want to stay in their homes and communities.

According to Bureau of Legislative Research records, the proposed Revenue Stabilization Act would increase the general revenue allocation for colleges and universities by $12.9 million, or 1.6%, to $775.6 million in fiscal 2023.

The measure would increase the general revenue allocation for county jail reimbursement by $6.4 million to $25.7 million in fiscal year 2023. The increase would be for raising the rate that counties are reimbursed for holding state inmates from $32 to $40 per day for each state inmate, Bureau of Legislative Research records show.

The increased rate paid to the counties will become effective July 1, Scott Hardin, a spokesman for the state Department of Finance and Administration, said Tuesday.

The National Conference of State Legislatures reported this month that general fund revenue collections across the states are strong based on its survey of legislative fiscal offices completed primarily in December and January.

Twenty-five states expect to exceed their forecast revenues in fiscal 2022, and in many cases those estimates have already been revised upwards since the beginning of the fiscal year, the conference reported. Another 17 states are on track to meet their current general fund revenue projections for the current fiscal year.

Over the long-term, there is less certainty about the strength of state fiscal conditions, according to the conference.

"The one-time nature of federal funds potentially sets states up to face a fiscal cliff as federal funding runs out, but projects and programs funded with federal aid continue," the conference said. "States are cautiously optimistic that robust revenue growth will continue, but there are many external factors that could affect revenue growth, and accurate revenue estimating continues to be a challenge for states. The continued presence of COVID-19, inflation, supply chain issues and global conflict are all risks to the U.S. economy that affect state finances."