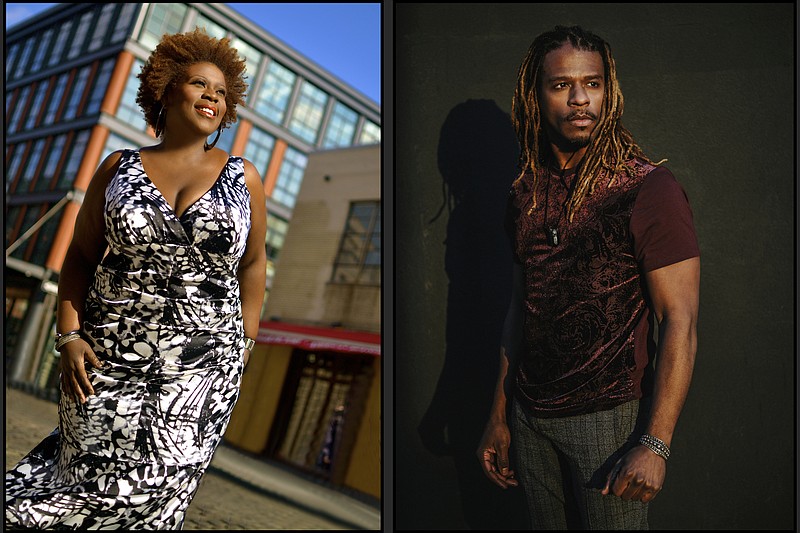 Capathia Jenkins and Ryan Shaw join the Arkansas Symphony for a “Tribute to the Queen of Soul: Aretha Franklin,” Saturday and Sunday at Little Rock’s Robinson Center Performance Hall. (Special to the Democrat-Gazette)

It has taken two years of pandemic-connected delays to get it on the stage, but Broadway veterans Capathia Jenkins and Ryan Shaw join the Arkansas Symphony Orchestra for its "Tribute to the Queen of Soul: Aretha Franklin," 7:30 p.m. Saturday and 3 p.m. Sunday at Little Rock's Robinson Center Performance Hall, 426 W. Markham St. at Broadway.

It's the second concert of the orchestra's 2021-22 Acxiom Pops Live! season.

The program features Franklin songs and covers of others, including "Chain of Fools," "I Say a Little Prayer," "Birth of the Blues," "Bridge Over Troubled Water," "Nobody Does It Better," "What a Friend We Have in Jesus/Climbing Higher Mountains," "MacArthur Park," "America the Beautiful," "R.E.S.P.E.C.T.," a "Salute to Ray Charles," "I Got You (I Feel Good)," "Unforgettable," "(You Make Me Feel) Like a Natural Woman," "A Change Is Gonna Come," "Isn't She Lovely," "Try a Little Tenderness" and "Amazing Grace."

Jenkins, Brooklyn-born and raised, has twice performed in pops concerts with the Arkansas Symphony, a 2018 tribute to Ella Fitzgerald and a 2016 concert titled "Broadway Rocks!"

She starred as Medda in "Newsies" on Broadway and in the off-Broadway 2000 revival of "Godspell" (her performance of "Turn Back, O Man" can be heard on the original cast recording). Other Broadway credits: "The Civil War," 'The Look of Love," "Caroline, Or Change" and "Martin Short — Fame Becomes Me."

Shaw has three Grammy Award nominations. He played Judas in "Jesus Christ Superstar" at the Lyric Opera House in Chicago and was the original Stevie Wonder in "Motown the Musical" on Broadway and, on London's West End, played the Soul of Michael Jackson in "Thriller Live."

Sponsor is Arkansas Blue Cross Blue Shield. Series sponsor is Acxiom. Tickets are $16-$72, $10 for students and active-duty military, free for all students with the adult ticket purchase. Call (501) 666-1761, Extension 1, or visit ArkansasSymphony.org.