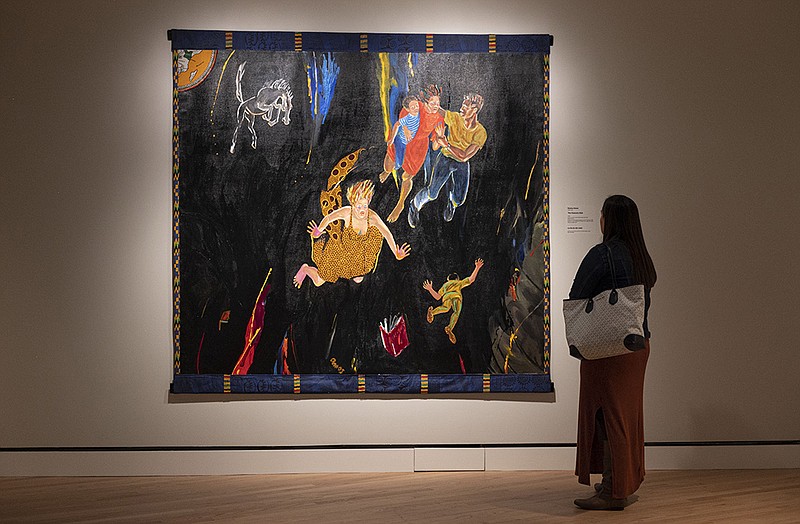 Emilie Hook looks at an art piece by Emma Amos titled The Heavens Rain that is part of The Dirty South exhibit looking back at 100 years of southern black culture that will be on display at Crystal Bridges from Saturday through July 25. (NWA Democrat-Gazette/Spencer Tirey)

Hip hop was the catalyst that spurred the creation of "The Dirty South: Contemporary Art, Material Culture, and the Sonic Impulse," a new exhibit at Crystal Bridges Museum of American Art that celebrates 100 years of Southern Black culture.

In addition to the visual art and material objects that you might expect, such as paintings, photographs and sculptures, sound and music play a strong role in "The Dirty South." It explores themes of landscape -- both the natural and man-made; sinners and saints, a religious and spiritual exploration; as well as Black corporality, or the Black body in terms of its holding tradition and knowledge.

It will open to the public Saturday and be on view through July 25.

"Sonic Impulse" refers to the many audio components that pull guests from one part of the exhibit to the next, according to Alejo Benedetti, associate curator of contemporary art at Crystal Bridges and in-house curator of "The Dirty South."

This is the third iteration of the exhibit, but it's in a more expanded capacity here, says Valerie Cassel Oliver, curator of "The Dirty South," who is the Sydney and Frances Lewis family curator of modern and contemporary art at the Virginia Museum of Fine Arts. While "The Dirty South" was first shown in Virginia, the idea was planted in Houston.

"It became apparent to me that the younger generation who were really embracing their southernness, they found a lot of pride and felt very anchored in those histories," Oliver said. "I asked them, 'What's giving you that sense to embrace being Southern?' A lot of people pointed to southern hip hop, that it gave them a license to create narratives about what it's like to be anchored in the South."

That contrasted with her own experience of moving away from the South out of fear it wasn't a place of sophistication. Oliver said she later realized that being from the South was her pair of ruby slippers, the power and authenticity that was with her all along.

Visitors shouldn't miss the SLAB (slow, loud and bangin') car in Crystal Bridges' south lobby. The Cadillac was commissioned and customized by Richard "FIED" Jones, a hip hop artist from New Orleans. Oliver said these cars are a method of self expression that often goes unrecognized.

"It's hard to appreciate these as works of art because we're too busy racializing the performativity, the loud music and the elbows sticking out," she said. "But when you take it out of that context, you do appreciate it as a work of art."

Among the other unique items on display is Jason Moran's "STAGED: Slugs' Saloon," a reconstruction of Slugs' Saloon, an important free jazz venue in New York City's East Village. The space includes a drum set, bass, piano, chair and jukebox. Oliver said she believed it belonged in the "Sinners and Saints" section since music can be the connector of the physical and spiritual.

Kaneem Smith's "The Past is Perpetual/Weighted Feet" features a large cotton bale framed by iron weights with rows of iron hanging scales on either side, symbolic of the crop's associations with enslavement, and themes of trade, resistance and justice.

Nick Cave's "Soundsuit" is a large construction of twigs, synthetic berries and metal over a mannequin. Cave began making soundsuits as a sort of protective armor to obscure the wearer's race, class and gender.

"Khemestry" by Sanford Biggers is a unique antique quilt mounted on a wall in a three-dimensional, origami-like way with the help of birch plywood. Quilt patterns prominent in Black quilting techniques, such as "Flying Geese," are featured in the exhibition for visitors to appreciate them as textiles and influences for other media.

A series of special events will accompany the exhibit and are listed at crystalbridges.org. 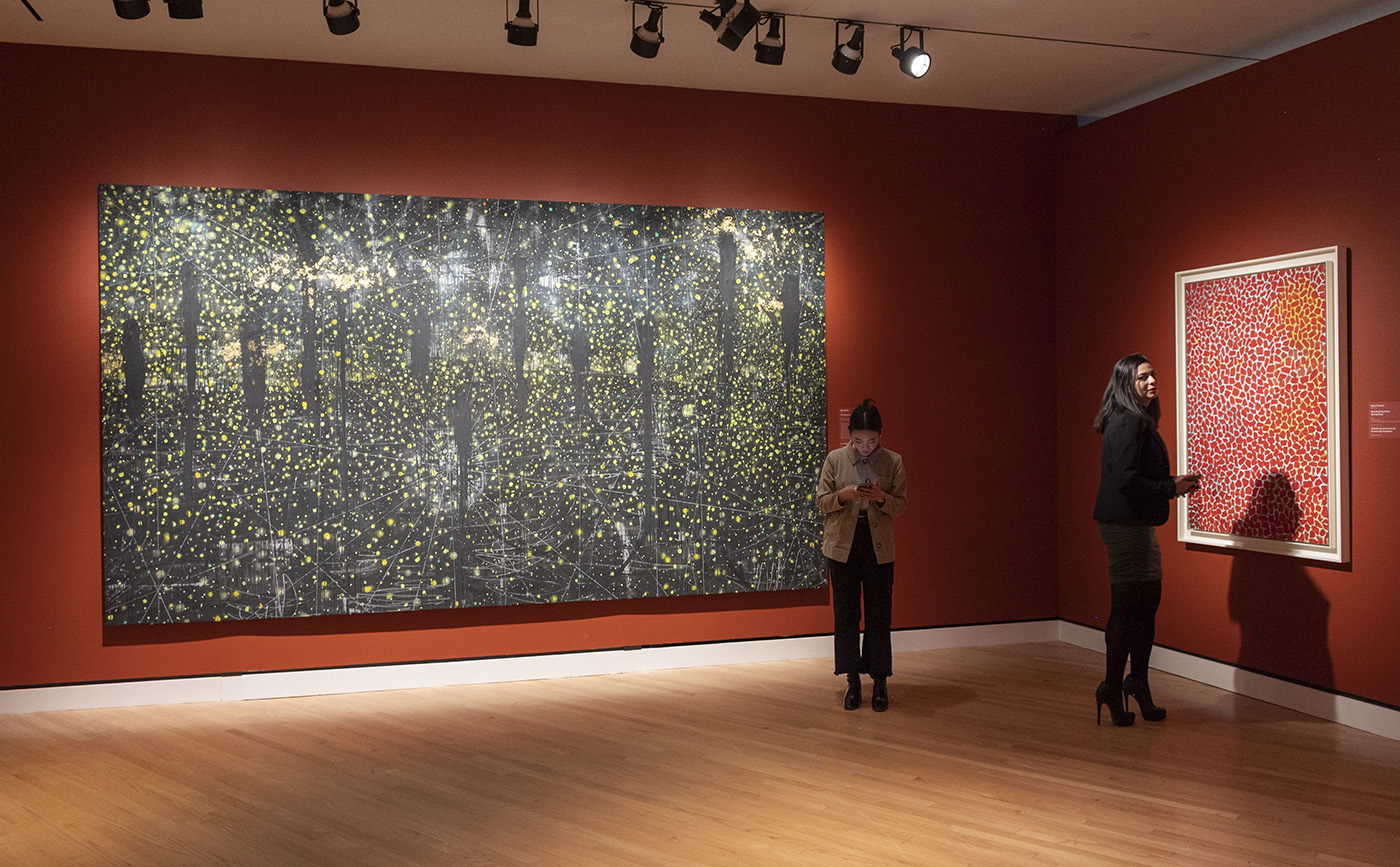 Melanie Teoh (left) and Jivette De Jesus look at a piece of art in the Southern Landscape section that is part of The Dirty South exhibit looking back at 100 years of southern black culture on display at Crystal Bridges. (NWA Democrat-Gazette/Spencer Tirey)