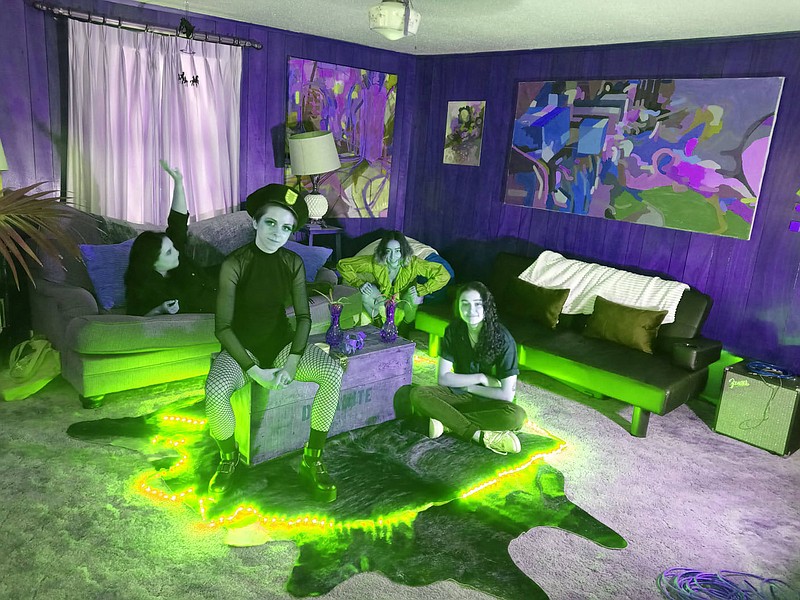 Fayetteville foursome Witchsister are working on a new album. The family band of heavy rockers are playing March 16 with stepmom and Modeling at George’s Majestic Lounge in Fayetteville. (Courtesy Photo)

Fayetteville's own Witchsister is getting ready for several shows this spring starting with a March 16 show with stepmom and Modeling at George's Majestic Lounge. The family foursome is comprised of three sisters -- Stevie, Stephanie and Skylar -- and a cousin, Kelsey, who all share the last name Petet. Vocalist Stephanie says that being related has its benefits and deficits when making music together.

"It makes it easier at times, because we all share similar flows, or processing. But then also difficult at times, because we are so comfortable, there is no filter," she shares. The group weaves together several influences to create their heavy rock-punk, metals "with a wee bit prog" sound. Drummer Kelsey is a fan of pop punk drumming, bassist Stevie likes electronic and dance music, guitarist Skylar favors both pop and industrial music while vocalist Stephanie draws influence from soul and blues. "The morning after a Witchsister show will leave you with the most massive bangover you've ever had," their website reads.

Stephanie adds that this summer they "are working on an all-female fems and thems showcase," and have "a new album in the mix." In the meantime they will melt faces at Doomsday at Prairie Street Live on April 23 and are planning a show at Smoke and Barrel sometime in the summer. Check out their music on streaming services such as Spotify, Apple Music, YouTube and bandcamp. More information about the band is at witchsistermusic.com.

If you are in a local band and would like your next show or album to be featured here, reach out to mhooper@nwaonline.com.

• Parmalee plays at 8 p.m. and Runnin' On Empty performs at 9: 30 p.m. March 17; The Repo'd Trailers start at 9 p.m. March 18 at Seven in Cherokee Casino at the Arkansas-Oklahoma state line. cherokeecasino.com/west-siloam-springs/entertainment.

• Tickets are $34.50 to $60 for the WellRed Comedy Tour featuring Trae Crowder, Corey Ryan Forrester and Drew Morgan with two shows at 6 and 8 p.m. April 30 at Meteor Guitar Gallery in Bentonville. meteorguitargallery.com.

• Tickets went on sale March 4 for comedian Brian Regan coming to the Walton Arts Center at 7 p.m. June 12. Prices range from $59.50 to $64.75 plus applicable fees. waltonartscenter.org

Send info about your upcoming concerts and events to Monica Hooper, music editor, at mhooper@nwadg.com.