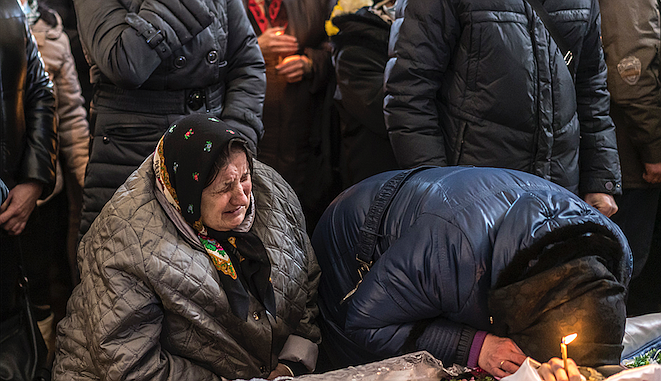 Relatives grieve at the funeral of two local soldiers killed when Russian jets bombed a military airfield in Lutsk, a city in northwest Ukraine, on Saturday, March 12, 2022. The attacks here and in Ivano-Frankivsk have pierced the relative sense of security in Western Ukraine, which has been a haven for millions fleeing the Russian invasion, as well as a corridor for relief efforts and weapons. (Brendan Hoffman/The New York Times)

SIRET, Romania -- As millions of women and children flee across Ukraine's borders in the face of Russian aggression, concerns are growing over how to protect the most vulnerable refugees from being targeted by human traffickers or becoming victims of other forms of exploitation.

The U.N. refugee agency says more than 2.5 million people, including more than 1 million children, have already fled war-torn Ukraine in what has become an unprecedented humanitarian crisis in Europe and its fastest exodus since World War II.

In countries throughout Europe, including the border nations of Romania, Poland, Hungary, Moldova and Slovakia, private citizens and volunteers have been greeting and offering help to those whose lives have been shattered by war. Many people are offering free shelter or transport, work opportunities and other forms of assistance, but accepting it comes with risks.

Police in Wroclaw, Poland, said Thursday that they detained a 49-year-old suspect on rape charges after he was accused of assaulting a 19-year-old Ukrainian refugee whom he lured with offers of help over the internet. The suspect could face up to 12 years in prison, authorities said.

"He met the girl by offering his help via an internet portal," police said in a statement. "She escaped from war-torn Ukraine, did not speak Polish. She trusted a man who promised to help and shelter her. Unfortunately, all this turned out to be deceitful manipulation."

Police in Berlin warned women and children, in a post on social media in Ukrainian and Russian, against accepting offers of overnight stays, urging them to report anything suspicious.

Tamara Barnett, director of operations at the Human Trafficking Foundation, a U.K.-based charity that grew out of the All Party Parliamentary Group on Human Trafficking, said that such a rapid, mass displacement of people could be a "recipe for disaster."

"When you've suddenly got a huge cohort of really vulnerable people who need money and assistance immediately," she said, "it's sort of a breeding ground for exploitative situations and sexual exploitation. When I saw all these volunteers offering their houses ... that flagged a worry in my head."

The Migration Data Portal notes that humanitarian crises such as those associated with conflicts "can exacerbate pre-existing trafficking trends and give rise to new ones" and that traffickers can thrive on "the inability of families and communities to protect themselves and their children."

Security officials in Romania and Poland told reporters that plainclothes intelligence officers were on the lookout for criminal elements. In the Romanian border town of Siret, authorities said men offering free rides to women have been sent away.

A 2020 human trafficking report by the European Commission, the EU's executive branch, estimates the annual global profit from the crime is about $32 billion. It says that sexual exploitation is the most common form of human trafficking in the 27-nation bloc and that nearly three-quarters of all victims are female, with almost every fourth victim a child.

Madalina Mocan, committee director at ProTECT, an organization that brings together 21 anti-trafficking groups, said there are "already worrying signs," with some refugees being offered shelter in exchange for services such as cleaning and babysitting, which could lead to exploitation.

"There will be attempts of traffickers trying to take victims from Ukraine across the border. Women and children are vulnerable, especially those that do not have connections -- family, friends, other networks of support," she said, adding that continued conflict will mean "more and more vulnerable people" reaching the borders.

A large proportion of the refugees arriving in the border countries want to go to friends or family elsewhere in Europe, and many are relying on strangers to reach their destinations.

"The people who are leaving Ukraine are under emotional stress, trauma, fear, confusion," said Cristina Minculescu, a psychologist at Next Steps Romania who provides support to trafficking victims. "It's not just human trafficking; there is a risk of abduction, rape ... their vulnerabilities being exploited in different forms."

Ionut Epureanu, the chief police commissioner of Romania's Suceava county, told reporters at the Siret border that police are working closely with the country's national agency against human trafficking and other law enforcement authorities to try to prevent crimes.

"We are trying to make a control for every vehicle leaving the area," he said. "A hundred people making transport have good intentions, but it's enough to be one that isn't ... and tragedy can come."

Vlad Gheorghe, a Romanian member of the European Parliament who launched a Facebook group called United for Ukraine that has more than 250,000 members and pools resources to help refugees, including accommodation, said he is working closely with authorities to prevent any abuses.

"No offer for volunteering or stay or anything goes unchecked; we check every offer," he said. "We call back, we ask some questions, we have a minimal check before any offer for help is accepted."

At Poland's Medyka border area, seven former members of the French Foreign Legion, an elite military force, are voluntarily providing their own security to refugees and are on the lookout for traffickers.

"This morning, we found three men who were trying to get a bunch of women into a van," said one of the former legionnaires, a South African named Mornay. "I can't 100% say they were trying to recruit them for sex trafficking, but when we started talking to them and approached them -- they got nervous and just left immediately."

"We just want to try and get women and kids to safety," he added. "The risk is very high because there are so many people, you just don't know who is doing what."