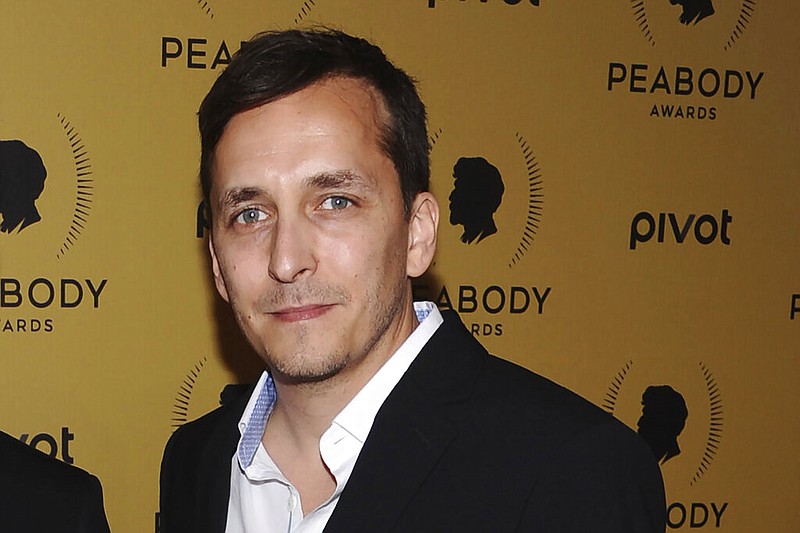 Brent Renaud attends the 74th annual Peabody Awards at Cipriani Wall Street in New York in this May 31, 2015, file photo. Renaud, a Little Rock filmmaker and journalist, was killed in a suburb of Kyiv, Ukraine, on Sunday, March 13, 2022, while gathering material for a report about refugees. Ukrainian authorities said he died when Russian forces shelled the vehicle he was traveling in. (Photo by Charles Sykes/Invision/AP, File)

Condolences poured in Sunday for Brent Renaud, an Arkansas filmmaker shot and killed by Russian troops in Ukraine.

A joint statement was issued from Edward Felsenthal, editor-in-chief and CEO of Time magazine, and Ian Orefice, president and chief operating officer of Time and Time Studios: "We are devastated by the loss of Brent Renaud. As an award-winning filmmaker and journalist, Brent tackled the toughest stories around the world often alongside his brother Craig Renaud. In recent weeks, Brent was in the region working on a TIME Studios project focused on the global refugee crisis. Our hearts are with all of Brent’s loved ones. It is essential that journalists are able to safely cover this ongoing invasion and humanitarian crisis in Ukraine."

“Arkansans are saddened today at the death of Brent Renaud in Ukraine," said U.S. Sen. Tom Cotton, R-Ark. "I join them in expressing deepest condolences to the Renaud family. And I reiterate to Vladimir Putin and his military leaders that the intentional targeting of innocent civilians, including reporters, is a war crime.”

“Brent Renaud will be remembered not only as a talented filmmaker but as an Arkansan who continuously gave back to our state to create a new generation of artists," said Matthew J. Shepherd, speaker of the Arkansas House of Representatives. "His life’s work stands as a testament of a free and open society, which is in stark contrast to the totalitarian forces whose unprovoked invasion he was documenting when his life was taken.”

Arkansas filmmaker Brent Renaud was shot and killed by Russian troops in Ukraine on Sunday. Two other journalists were injured in the shooting, the police chief for the Kyiv region wrote on Facebook.

"Of course, the profession of a journalist is a risk, but US citizen Brent Renaud paid his life for trying to highlight the aggressor's ingenuity, cruelty and ruthlessness," Andriy Nebytov wrote.

A Ukrainian news agency reported Sunday that Renaud, 50, of Little Rock, was shot and killed by Russian troops outside Kyiv.

"I’m devastated by the loss of my close friend and long time producer, Brent Renaud," Christof Putzel, a documentary filmmaker and television correspondent, posted on Twitter. "The world and our profession has lost one of our greatest legends. Hug your family, your colleagues, and watch the news. People are dying to bring it to you."

Putzel expanded on that in an interview with CNN: "I woke up this morning to the news that Brent — longtime best friend, incredible colleage, the best war journalist I think ever existed — finding out about his passing. Brent had this ability to go anywhere, get any story, listen and communicate what was happening to people who wouldn't otherwise see it. It is a devastating loss to journalism today. ... When the crisis in Ukraine happened, Brent was on an airplne the very next day."

An Arkansas filmmaker who was shot and killed by Russian troops on Sunday outside Kyiv had gone there to shed light on the atrocities being committed, a correspondent for PBS NewsHour said on Twitter.

“Brent Renaud was killed while filming civilians escaping a Russian military onslaught on their small town near Kiev,” Jane Ferguson tweeted on Sunday. "The Russian military has not spared civilians or journalists throughout this war, something Renaud himself came here to make the world all the more aware of.”

In a tweet earlier Sunday, Ferguson said she had seen Renaud’s body under a blanket.

"Just left roadside spot near Irpin where body of American journalist Brent Renaud lay under a blanket,” she wrote. "Ukrainian medics could do nothing to help him by that stage. Outraged Ukrainian police officer: 'Tell America, tell the world, what they did to a journalist.'"

Brent Renaud and his brother, Craig, were a Peabody Award-winning documentary film team that drew attention to human suffering, often working with major news organizations like The New York Times, according to that newspaper.

Craig Renaud told The New York Times that his brother was in Ukraine working for MSNBC and for the television and film division of Time magazine. He was working on one segment of “Tipping Point,” a multipart series about refugees around the world.

"Migration under desperate circumstances was a recurring subject for Brent, who with Craig also made documentaries about Haitians deported from the United States and children fleeing poverty and danger in Central America," according to The New York Times.

The Renaud brothers won their Peabody Award for “Last Chance High,” which tells the story of Chicago's Moses Montefiore Academy, whose students suffer from emotional disorders and have been expelled from other public schools in the city.

Brent Renaud earned a master of arts degree from Columbia University and was a 2019 Nieman Journalism Fellow at Harvard University.

Arkansas filmmaker Brent Renaud was shot and killed Sunday when Russian forces fired on the car in which he was traveling outside Kyiv, Ukraine, Kyiv Region police reported.

Juan Arredondo, a filmmaker who was shot in the same car, gave a brief interview at Okhmatdyt, the largest children's hospital in Kyiv, just before being wheeled in to the operating room for surgery.

"We crossed one, the first bridge in Irpin," Arredondo said in the hospital's post on Instagram. "We were going to film other refugees leaving. And we got into a car. Somebody offered to take us to the other bridge. And we crossed a checkpoint, and they start shooting at us. So the driver turned around, and they kept shooting. Two of us. My friend, Brent Renaud, and he's been shot and left behind."

Arredondo said he didn't know what had happened to Renaud.

"I saw his being shot in the neck. And we got split," Arredondo said.

Journalists have been forbidden from entering Irpin since Renaud’s death, according to The Kyiv Independent.

A New York Times spokesperson said Renaud, 50, was a “talented filmmaker who had contributed to The New York Times over the years.” It said he was not working for the publication at the time of his death. Renaud was wearing a New York Times badge, according to reports.

Renaud and his brother Craig founded the Little Rock Film Festival, which concluded in 2015 after a nine-year run.

Kyiv Region police said: “Of course, the profession of journalism carries risks. Nonetheless, U.S. citizen Brent Renaud paid with his life trying to highlight the deceit, cruelty and ruthlessness of the aggressor.”

Asked about the reports, White House national security adviser Jake Sullivan told CBS News that the U.S. government would be consulting with the Ukrainians to determine how this happened and would then “execute appropriate consequences.”

This story has been updated. It was originally published at 11:30 a.m.