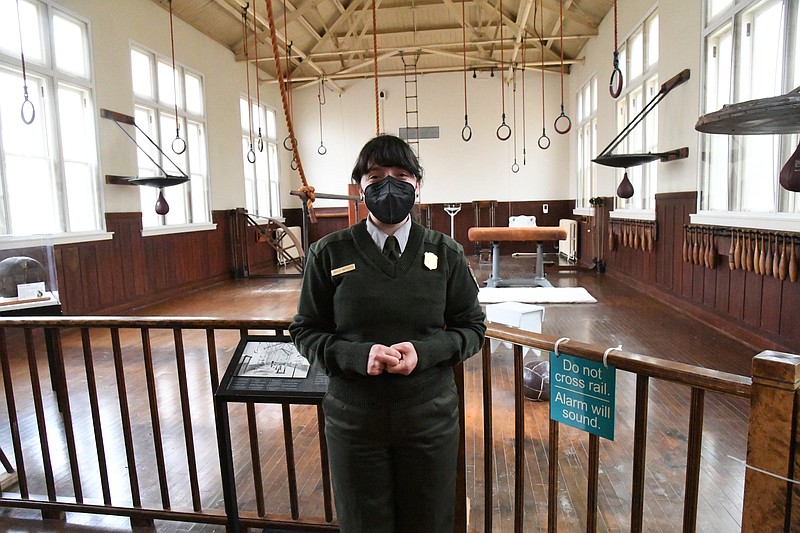 Ashley Waymouth, supervisory park ranger, is shown in the Fordyce Bath House’s gym, a popular spot for tourists. - Photo by Tanner Newton of The Sentinel-Record

Last year's record bested the previous mark, set in 1970, of 2,092,400 visitors, according to the Park Service, which released the figures last month as part of the NPS Visitation Report for 2021.

"I can't say I'm surprised, just based on how busy it was all last year on Bathhouse Row and what I heard anecdotally from our partners who operate out of Superior and Quapaw and the other bath houses, so it wasn't shocking," Laura Miller, Hot Springs National Park superintendent, said in an interview after the report's release.

"We knew it was busy, but we're really happy about it, and I think a big part of it was our 100th anniversary as a national park. So we wanted to encourage people to come out and visit their national park, and I think they did," she said.

"We topped 2 million, and the last time we set this kind of record was, I think, in 1970, so it's been a while. We've always averaged right around between 1.4 million and about 1.7 million, here in the park, just depending on different things going on in any given year. But yeah, it was a pretty substantial increase this year," Miller said.

"And I think part of that sort of reflects, too, the general trend of people getting out in parks more, you know with the pandemic still going on, going out in the parks, using the trails, being outside, was something that people could do, and I think people got out to a lot of the parks over the last couple of years that maybe didn't so much before," she said.

Another draw to the park is the various businesses on Bathhouse Row, she said, noting, "Any time you have a concentration of all kinds of things to see and do in one place, I think that's certainly a draw."

"Gosh, we are really excited to receive the news that we broke two attendance records last year," Supervisory Ranger Ashley Waymouth, who served as the park's anniversary coordinator last year, said, noting she wasn't expecting it, "but when we saw the numbers we were like 'Wow, this is great.'

"We think it was a multitude of factors between being the second year of the pandemic -- more people are going on road-trips, more people are exploring national parks -- people want to be outside and find that solace and inspiration in these outdoor spaces, and additionally, 2021 was our park's 100 anniversary," Waymouth said.

"We began taking visitation records in 1904, and so if you add up all of the numbers from 1904 to present day, we have surpassed over 100 million cumulative visits to Hot Springs National Park, so that's another huge milestone, right, in all of these years, over 100 million people have been to this park," she said.

Events Waymouth said were popular in 2021 include Junior Ranger Day, Bark Ranger Day and "our actual 100th birthday on March 4th, we saw so many people that day, as well."

Determining the visitation numbers in the park was not as easy as in others such as Yellowstone National Park, which has an admission fee. Hot Springs is a free park.

Waymouth said to calculate the number of visitors, "we actually have counters in different places throughout the park, and so it tracks, it just takes account when people either walk on certain trails or drive on our mountain roads or walk in our bath houses."

This raw number includes every time a person enters an area, meaning tourists will be counted multiple times. To compensate for that, Waymouth said they "run (the number) through a formula to account for redundancy, and then at the end of it, we get that number."

The attendance number that is produced is then verified by multiple people.

"We send that number throughout the park for people to confirm or verify or give their feedback and then that goes to our regional office and that goes to our Washington office, and all of that information gets verified and we are left with our visitation totals," Waymouth said.

For the future, Miller said "we certainly hope that people will still come to the park. There were a lot of things that we did during the anniversary like Bark Ranger Day and some of the other special events that we developed that we want to carry on into the future."

"I'm hoping, as conditions with the pandemic hopefully subside somewhat or we learn to live with it, whatever happens, I hope that even more people can come out and visit the park and do all the things that there are to do here, but, yeah, we definitely have a lot of special events that we want to keep going and keep building on," she said.

In addition to the increase in visits in 2021, the park also rose up the rankings of national parks by visitation. While there are 63 national parks in America, the National Park Service has 423 units and HSNP ranked the 38th most-visited in 2021, Waymouth said, and out of the national parks, the park ranked 14th.

Across all seven Arkansas units, a combined 3,979,627 visits were made in the parks. 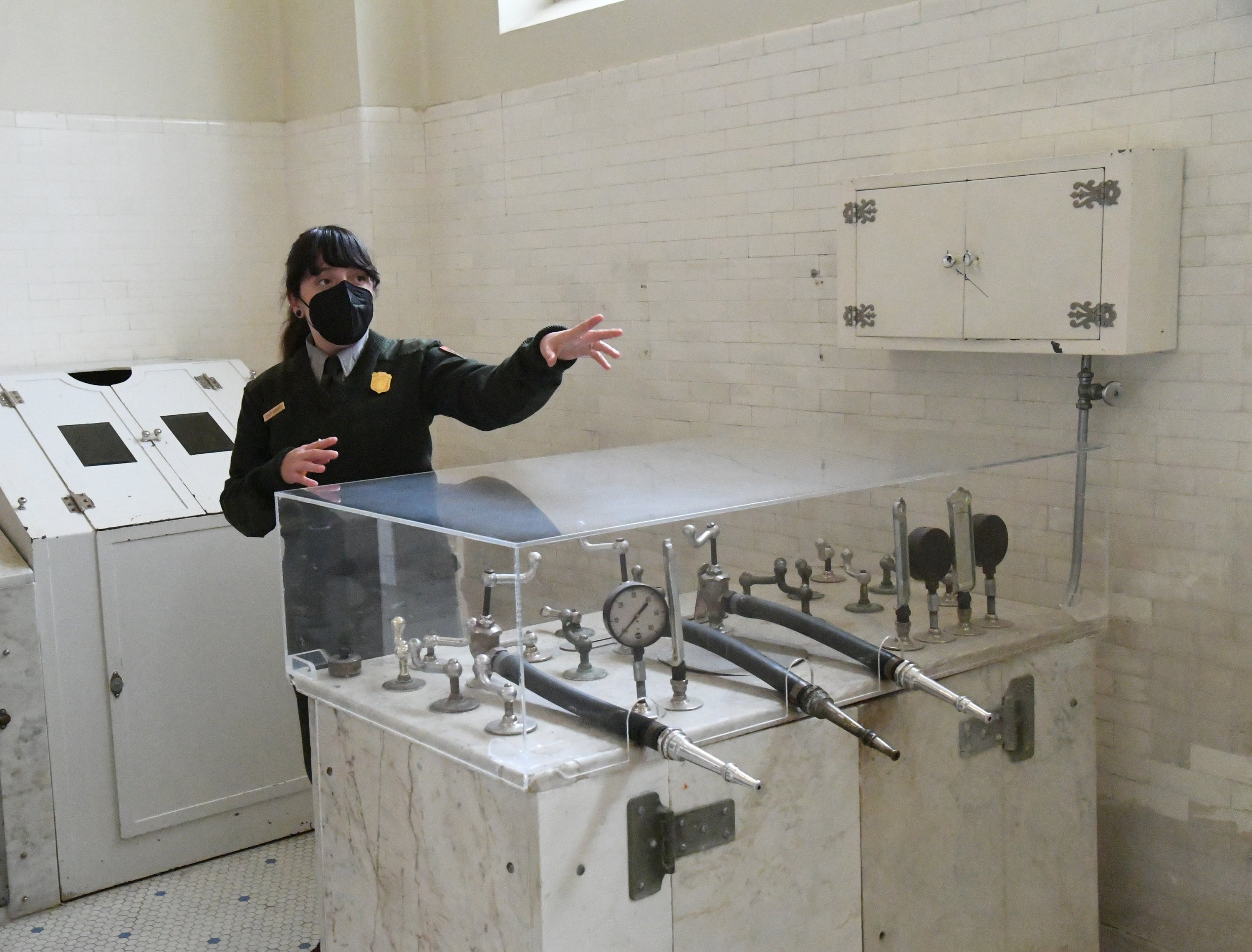 Ashley Waymouth, supervisory park ranger, gives a tour of the Fordyce Bath House, explains the function of a piece of equipment formerly used in the bath house. - Photo by Tanner Newton of The Sentinel-Record