Relearning to walk, finding a home for a dog: Home care program for Arkansas veterans goes beyond medical needs 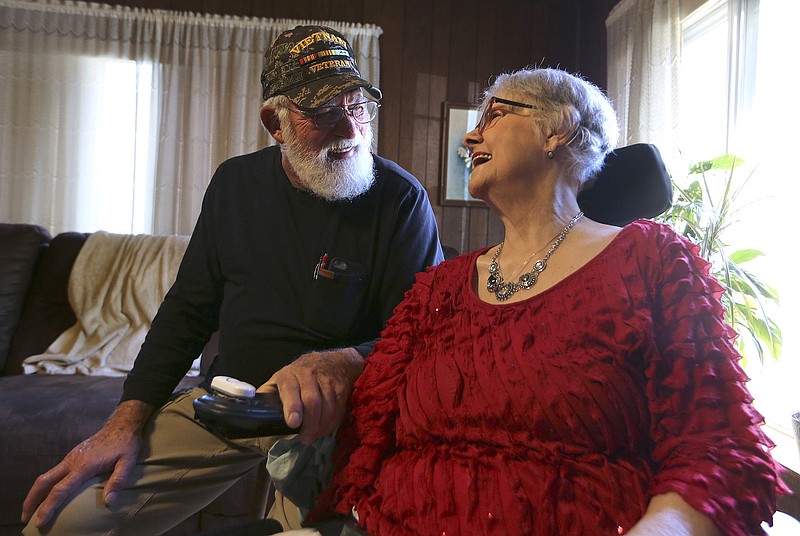 Larry Tyler laughs with his wife, Earlene, at their home on Wednesday, March 9, 2022, in Traskwood. (Arkansas Democrat-Gazette/Thomas Metthe)

Larry Tyler wants to live just one day longer than his wife, Earlene.

Tyler, 75, has been his wife's caretaker since a stroke left her right side paralyzed almost 14 years ago.

An Army veteran who served in the Vietnam War, Tyler is grateful he can receive primary care at their home in Traskwood instead of making a two-hour round trip to the nearest veterans hospital in Little Rock.

Driving there and back would cost him precious time with Earlene, who is 73 and has "put up with" him for half a century, he said.

"When she came home from the hospital after that stroke in 2008, our kids wanted to put her in the nursing home, and I said, 'Not as long as I'm alive,'" Tyler said.

Tyler is one of the 300 veterans who receive home-based primary care through a nationally recognized program at the Central Arkansas Veterans Healthcare System.

The program stands out because it doesn't only address veterans' medical needs. It asks them: What matters to you?

For Tyler, it's Earlene.

For another veteran in Hot Springs, it's relearning how to walk.

Another in Hot Springs Village simply wants to find a good home for his dog.

The Central Arkansas VA's program received recognition as an "age-friendly health system" earlier this month from the Institute for Healthcare Improvement.

The program adheres to the "4Ms," guidelines created by the Institute to care for older adults. While mental activity, mobility and medication focus on a patient's imminent physical needs, the fourth M -- what matters -- seeks to fulfill the patient's long-term goals, Lisko-Burns said.

The program fits into a growing national trend. Home-based primary care has seen a resurgence, hearkening back to the days of doctor house calls, according to 2018 research published the peer-reviewed medical journal Geriatrics.

Researchers found -- including through a review of the VA program -- that home-based care not only improved patient outcomes but also was cheaper.

The home-based primary care program already prioritized veterans' goals and wishes, but asking them "what matters most" yielded more meaningful answers, and not all of them pertained to medical care or physical health, Lisko-Burns said.

"Medical care is our mission, but a lot of it turns into social care, things that you wouldn't think of," she said.

That's where Tyler's hopes for himself and Earlene came in.

There's also Louis Barber, 76. What matters most to the Air Force vet from Hot Springs Village is for his dog, a 5-year-old black and tan coonhound named George Jones, to end up in a good home.

Barber defines a good owner for George as someone who would let him hunt and "do something with him besides keep him in the pen and teach him to sing."

Lisko-Burns said her staff has been asking around for anyone who might want a hunting dog.

"We haven't found George a home yet, but we're not giving up," she said.

There's also Michael Clay, an Air Force veteran from Hot Springs whose role in the Air Force was security police. He also worked as a security guard for 28 years after leaving the military. His "legs just don't work" now.

"I spent all my time on my feet and I'm paying for it now," said Clay, who turned 69 on Thursday.

A physical therapist will help Clay relearn to walk, and the Central Arkansas VA got him an electric scooter so he can leave his apartment if he wants.

Many veterans in the program have serious illnesses, such as chronic obstructive pulmonary disease, dementia, heart failure or neurodegenerative disorders, Lisko-Burns said.

She took over the home-based primary care program in early 2020, shortly before the arrival of covid-19, and she has been aware from the start that the veterans' ages and health conditions put them at increased risk of contracting and suffering from covid-19.

"Trying to figure out how to care for [veterans] and not accidentally bring them covid was a challenge," she said.

The program used telehealth for many appointments, and health workers wore personal protective gear during appointments that could not be done virtually, like blood draws, Lisko-Burns said.

Clay said providers stayed in regular contact with him about his health while limiting in-person visits during the pandemic.

He described himself as "more or less bed-bound" with limited mobility, and he said the necessary isolation of the pandemic has its difficulties.

"The only thing I hate about being bed-bound is not being able to see my daughter when I need to," Clay said. "She stays with her mother in Oklahoma. I talk to her every day, but it's not like seeing her. The pandemic shut us all in, I guess."

Clay received his covid-19 vaccination through the program last year. Lisko-Burns said there was a "high acceptance rate" of vaccinations from the veterans who participate in the program, and staff administered shots as soon as they were available.

"That took a lot of planning and coordinating, especially since the vaccines need to be certain temperatures," she said.

In 2000, the Central Arkansas VA started the first "medical foster home" program for U.S. veterans, in which they can live with families who are paid to assist in caring for them.

"It's a good choice for veterans who don't have anyone to take care of them but would like to stay out of a facility like assisted living," Lisko-Burns said. "It's also for people whose family members are unable to care for them for whatever reason."

Philip Crispi, an 89-year-old Korean War veteran who served in the Army, lives in a house just outside Hot Springs with a married couple and their son. He said he did not have good experiences in assisted living facilities and has been comfortable since he moved into the foster home in early January.

Crispi said his health needs are "on the fringe" because, even though he struggles with sight, hearing and mobility, he does not need as much help as many nursing home residents.

"I do a lot for myself [because] I don't want to turn to stone, but the care you need is the care you get and you don't have people stumbling over you all the time," he said.

Up to three veterans can live in the same foster home as long as they each have their own bedrooms and bathrooms, Lisko-Burns said, and the VA actively recruits potential caregivers, often finding them through churches.

While only a few Central Arkansas veterans live in foster homes at the moment, the program has spread to 118 other VA sites in 41 states, serving 800 veterans with more than 550 caregivers, she said.

Before his stints in nursing homes, Crispi lived in an apartment and received home-based primary care from the VA from 2014 to 2020. The foster care program fills a need, he said.

"They need more foster home care for people who need attention and can't get it at home, like me, a single man who lived alone and all of a sudden had a health crisis," Crispi said.

Without the need to travel to Little Rock for medical care, Tyler has been able to spend time not only with his wife but also with their three children, eight grandchildren and five great-grandchildren. Quality time with their extended family has been all the more important to them during the pandemic, since some family members live in other states, Tyler said.

During a March 3 interview, the Tylers were outside watching two of their great-grandkids play.

"This is the first time we've seen some of our great-grandchildren since before Christmas," Larry Tyler said. "It makes us happy."