ARKANSAS SIGHTSEEING: Ozark Highlands Nature Center brings the outside inside 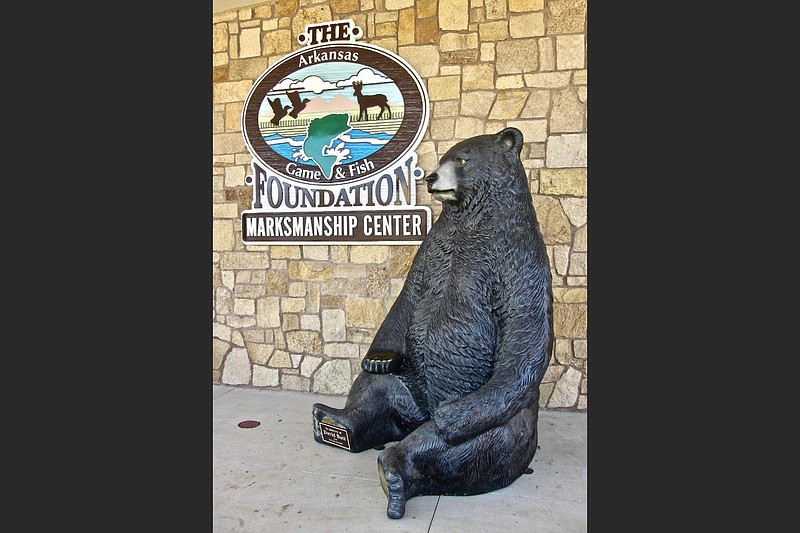 A bear statue greets visitors to the newest Arkansas Game and Fish nature center. (Special to the Democrat-Gazette/Jack Schnedler)

SPRINGDALE — The Arkansas Game and Fish Commission's fifth and newest nature center faced the challenge of opening 15 months ago while the covid pandemic continued to turn the world topsy-turvy.

Now, amid new hopes of normalcy thanks to the omicron variant's easing, J.B. and Johnelle Hunt Family Ozark Highlands Nature Center is aiming for a busy spring and summer of welcoming visitors.

The 61-acre site, to the east of Interstate 49 and south of Wagon Wheel Road in Springdale, offers outdoor and indoor archery ranges among its amenities. The target practice is free of charge, with bows and arrows provided. On the 3D Archery Range with its separate pavilion, participants take aim at replicas of deer, bears and other wildlife.

A message from Johnelle Hunt, widow of trucking magnate J.B. Hunt, greets guests entering the 32,000-square-foot visitor center: "Celebrate the excitement and wonder of the great outdoors as only nature provides." 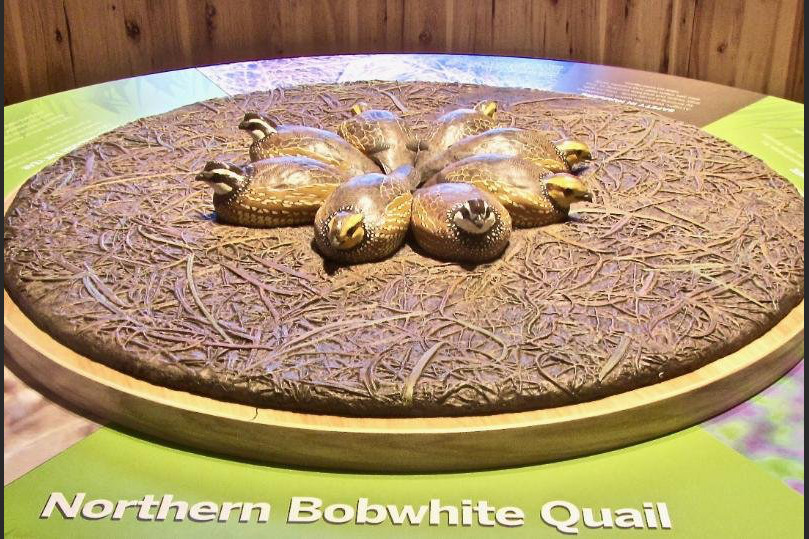 Northern bobwhite quail are featured in an Ozark Highlands Nature Center exhibit. (Special to the Democrat-Gazette/Jack Schnedler)  Sounds of the outdoors can be heard inside the center. Pressing a button at one exhibit activates an image of birds flying overhead while their recorded calls are played. There are four species of flocks to choose from: broad-winged hawk, common nighthawk, mallard duck and mourning dove.

At the Hook, Line and Sinker mock fishing hole, visitors can try their skills with a digitally activated rod and reel. Another computer-driven exhibit lets would-be hunters take aim at deer with laser rifles. The indoor archery range is also set up for the firing of BB guns.

Two drinking fountains near the entrance do double duty as environmental messengers. In their background a large photograph of rippling waterfalls carries a printed message: "Water quality is key to keeping the Natural State natural."

At the back of the building, the digital image of a creek appears to flow along the floor to a 2,000-gallon aquarium. Video screens under glass offer the illusion of an Ozarks stream running under visitors' feet. 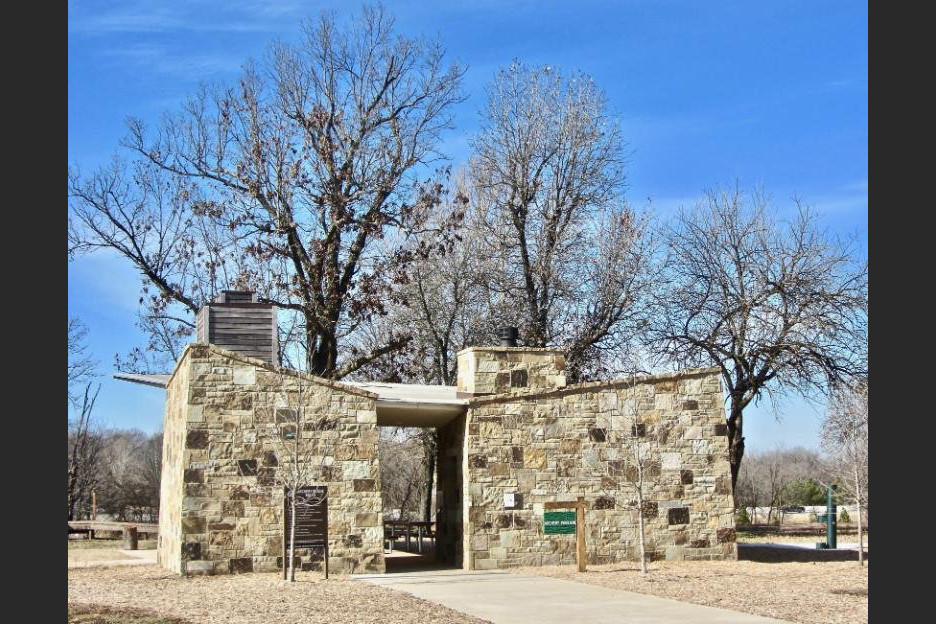 Ozark Highlands Nature Center has a pavilion for its outdoor archery facility. (Special to the Democrat-Gazette/Jack Schnedler)  The hall's east end is scaled down for youngsters, who are invited to make their way among towering blades of grass 7 or 8 feet tall. The aim is to give preschoolers an idea of what it's like to be quail trying to avoid human hunters and other predators in the birds' grasslands habitat.

Cost of the nature center totaled $20.1 million. The city of Springdale donated the land, valued at $3.2 million. The Hunt family gave $5 million. Close to $3 million came from federal grants, and more than $5.5 million from AGFC's general fund and license-plate program. Money came as well from the 1/8th-cent conservation fund created by the state constitution's Amendment 75.

When Ozark Highlands opened in December 2020, Johnelle Hunt told the gathering that the center could be a way to keep alive the spirit of the outdoors she had savored as a child in Heber Springs: 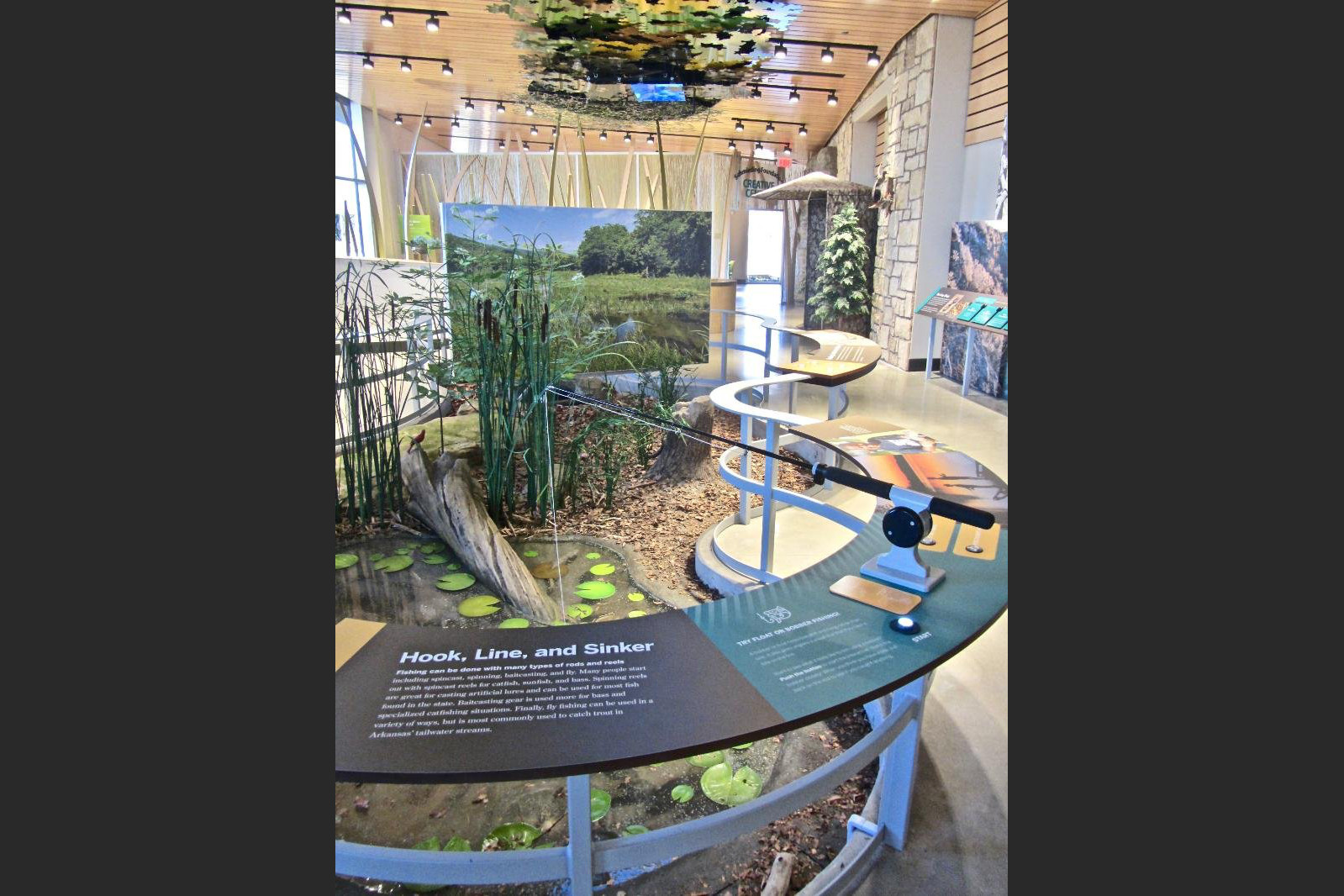 Visitors can fish digitally at Springdale’s Ozark Highlands Nature Center. (Special to the Democrat-Gazette/Jack Schnedler)  "I thought of my years growing up, hiking in the woods, swimming in the little streams and being outdoors from morning until night. One of the things that has bothered me is that our children today do not get the opportunity to know nature the way we did. I am so hopeful that this will help in that regard."

The Wye Mountain Daffodil Festival has been extended for a third weekend and will conclude on Friday and Saturday. The picking of flowers from the field adjoining Wye Mountain Methodist Church will be permitted those two days for $1 per dozen. For details, visit the festival's Facebook page.