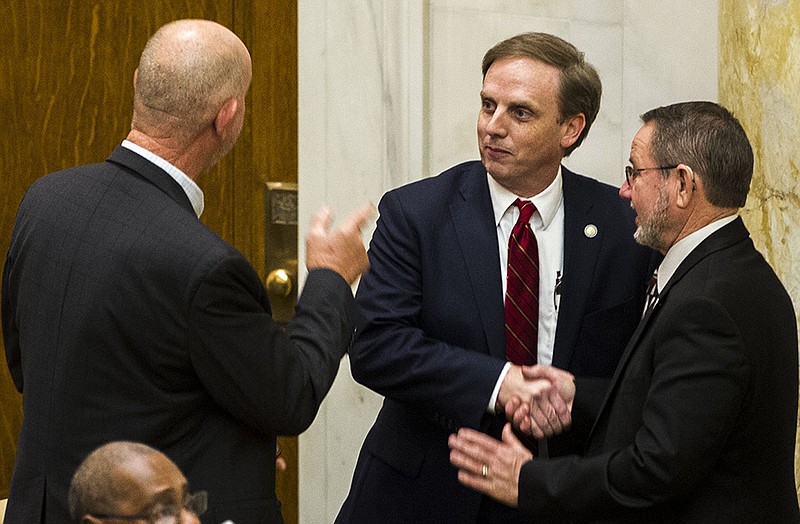 Arkansas Representative Bruce Cozart, R-Hot Springs, left, and Representative Ron McNair, R-Alpena, right, congratulate Matthew Shepherd, R-El Dorado, on being elected to Speaker of the House for the third consecutive term during a meeting of the House of Representatives on Tuesday, March 15, 2022. (Arkansas Democrat-Gazette/Stephen Swofford)

Matthew Shepherd was reelected by colleagues on Tuesday as the Arkansas House speaker-designate, putting him in line to be the first representative to have three terms in the House's top post once the 94th General Assembly begins.

Shepherd, R-El Dorado, was the unanimous choice after his lone opponent, Rep. Austin McCollum, R-Bentonville, removed his name from consideration as a sign of what he called "unity" in the House.

Shepherd said McCollum came to him prior to the House convening Tuesday and indicated he was going to remove his name.

"I think any time you have a vote such as what we had here where it was all affirmative, you know, I think [unity] is one of the takeaways," he said. "That is unifying, and now as we move forward to the 94th [General Assembly] there is an opportunity for the House to work together in a way that is productive for the people of Arkansas."

McCollum told the Arkansas Democrat-Gazette on Tuesday afternoon that the decision to withdraw his name came after discussions with the Republican Caucus.

"Ultimately where we landed was that we wanted to unite for one candidate," he said. "It was unifying move and I was also responding to the will of the caucus."

McCollum said moving forward the Republican caucus is ready to focus on making policy-driven decisions for the people of Arkansas.

Shepherd said he was humbled to be reelected.

"I am humbled by that and also excited to have the opportunity to continue the work here as speaker of the house," he said.

Shepherd took time during his acceptance speech to reflect on some of the values he wanted to instill in the House when he was first elected speaker-designate in 2018.

"First, I wanted us to be a body that displayed great character," he said. "... I believe it's important, and it was even more important in 2018 because as many of you know the headlines at that time were riddled with the misdeeds of some of our former members. But I am proud of the character that the House and each of its members has shown as we have worked over the past number of years."

Shepherd said at that time he wanted to instill a sense of civility and discipline in the House and prioritize open lines of communication, along with doing what was in the best interest of the people of Arkansas.

"In my opinion, I submit to you this day that we as a House have exhibited each of those values," he said. "It hasn't been easy, but I believe that we have. We must continue to work in the best interest of the House."

Shepherd said tangible changes have been made, noting the amount of legislation that was passed during the most recent session, expanding the live stream to include the vast majority of committees and cutting the overall budget for the House.

"I look forward to the opportunity to lead the House forward," he said. "Hopefully we can operate in a unified fashion, understanding there is going to be a difference of opinion by our nature as we take votes on issues, but we can ultimately come together in the best interest of Arkansas."

Shepherd said he looks forward to moving forward with the legislative process outside of pandemic measures.

"I think one of the big things now that the state is emerging from covid is [that] as the House and Legislature move back to a more regular routine, prior to covid, we really operated in a very efficient manner," he said. "We were doing things in a way that was very productive and that the people of Arkansas can be proud of. Not that we haven't done that during covid, but covid has been very disruptive to the legislative process.

"So I think this is an opportunity to get back to that normal legislative process and hopefully set a course that is very positive for the state of Arkansas."

Shepherd was first elected as House speaker-designate in March 2018 over Rep. Andy Davis, R-Little Rock, by a 57-41 vote. He was supposed to take over in January 2019 but was elevated sooner than expected, in June 2018, after then-Speaker Jeremy Gillam, R-Judsonia, resigned to take a job at the University of Central Arkansas.

Shepherd was unopposed in 2020 as speaker-designate after his only challenger, House Revenue and Taxation Committee chairman Joe Jett, R-Success, removed his name from consideration before a vote was taken. 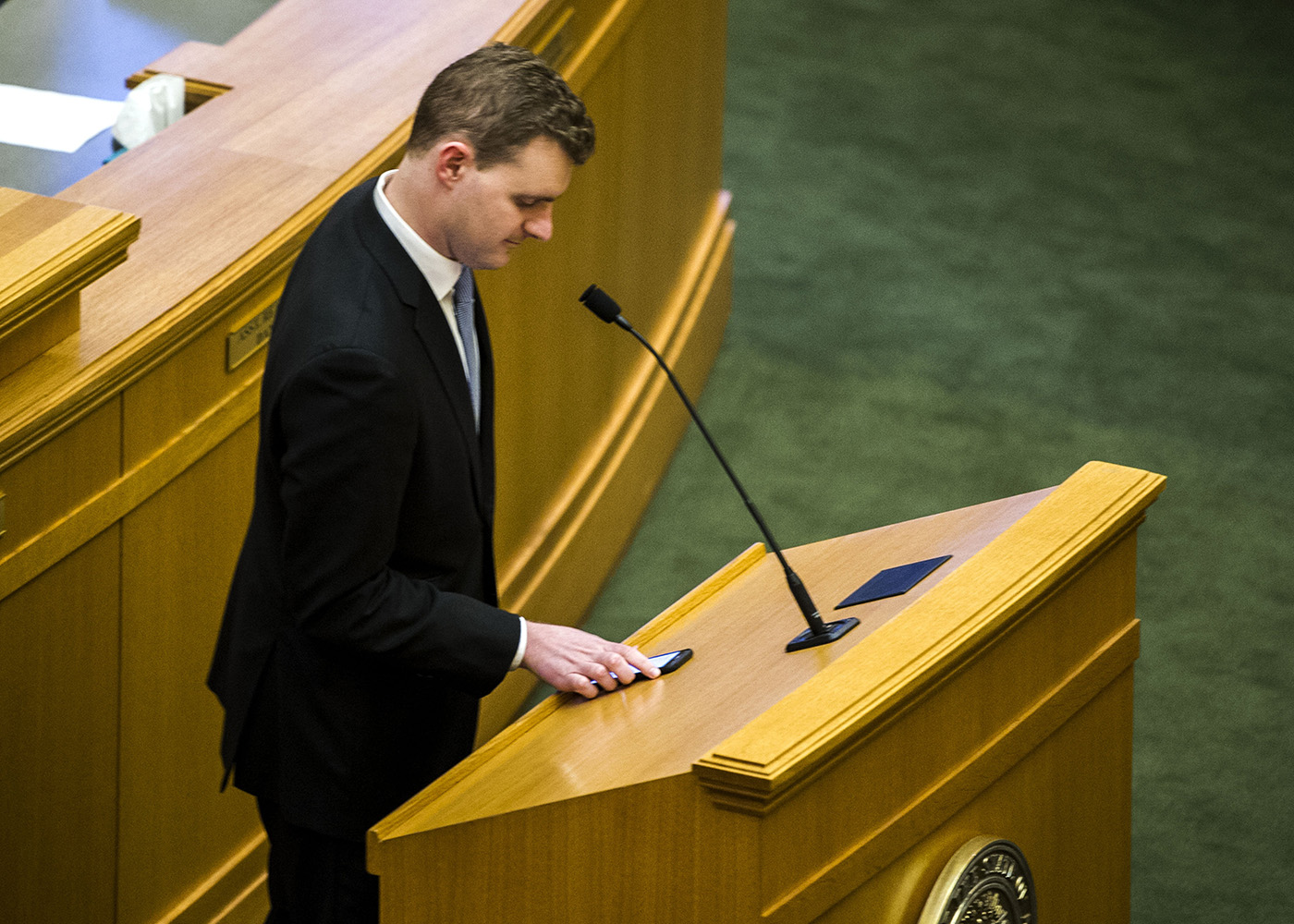