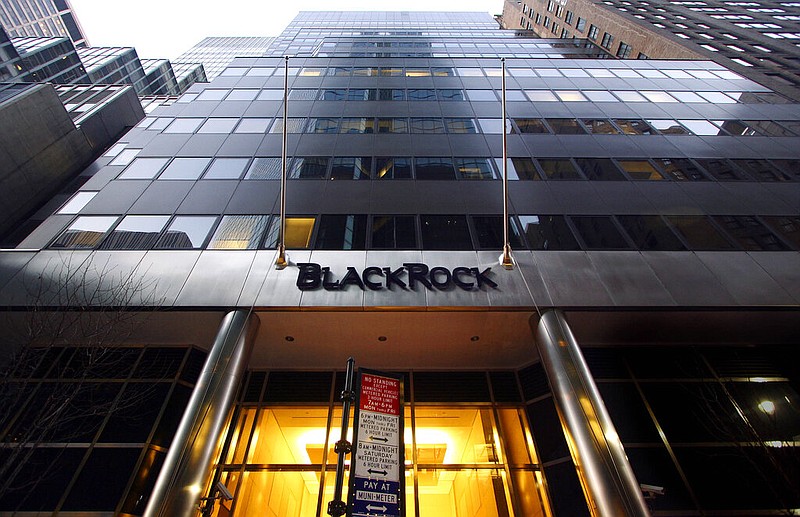 BlackRock Inc. headquarters are shown in New York in this Feb. 15, 2006, file photo. BlackRock, one of the world's largest asset managers, is promoting itself as a friend of fossil-fuel industries after years in which the company promoted its consideration of climate change and other environmental, social and governance issues into its investment and proxy voting decisions. (AP/Mark Lennihan)

State Treasurer Dennis Milligan has stripped about $125 million out of money market accounts managed by New York-based BlackRock, his spokeswoman said this week.

"Once we began to see BlackRock's active global political activity (handpicking companies that aligned with their ESG beliefs and beliefs we feel most Arkansans are opposed to), we began divesting and were fully divested by March 1," Milligan spokeswoman Stacy Peterson said in a written statement.

She said ESG refers to environmental, social and governance practices.

Asked for examples of how BlackRock handpicks companies that aligned with certain beliefs that the treasurer's office believe most Arkansans are opposed to, Peterson said, "What I meant by this is corporations such as BlackRock are taking public money and playing politics with it (i.e. investing in clean energy and more importantly, divesting from fossil fuel producing companies).

A spokesperson for BlackRock declined to comment this week about the state treasurer's decision to not invest state funds in money accounts managed by BlackRock.

Milligan, a Republican from Benton, has served as state treasurer since 2015. He has filed to run for state auditor in this year's election.

He said in a written statement that "additionally, prior to the Russian invasion, we verified we had no direct Russian investments and divested of any associated securities that had a tie to Russia."

Peterson said the treasurer's office didn't previously have any associated securities with a tie to Russia.

Two months ago, Republican West Virginia State Treasurer Riley Moore announced the West Virginia Board of Treasury Investments will no longer use a BlackRock Inc. investment fund as part of its banking transactions. Moore said the decision was based on recent reports that BlackRock has urged companies to embrace "net zero" investment strategies that would harm the coal, oil and natural gas industries, while increasing investments in Chinese companies that subvert national interests and damage West Virginia's manufacturing base and job market.

Last week, state Rep. Mark Lowery, R-Maumelle, tweeted that "I congratulate Treasurer Dennis Milligan in disinvesting Arkansas from any BlackRock investments after revelation of their ties to the Communist Chinese military" and Lowery pledged to continue that disinvestment if elected state treasurer in this year's election.

Peterson said this week that Milligan made his own decision to no longer invest in money market accounts managed by BlackRock.

A month ago, Lowery tweeted that "as the next Arkansas State Treasurer" he pledges to block any state investments, including pension funds through BlackRock. In the Republican primary for treasurer, he is vying with state Sen. Mat Pitsch, R-Fort Smith. The winner will take on Little Rock's Pam Whitaker in the general election.

Two of state government's retirement systems have nearly $1.4 billion managed by BlackRock, according to officials for the two systems.

Peterson said in her written statement that "We have not had any instrument that would have been invested directly through BlackRock since Treasurer Milligan has been in office.

"The only exceptions I am aware of are two BlackRock money market funds that we opened, one in August of 2019 and the other in July 2020," she said in her written statement.

There was no money lost in these accounts, Peterson said.

Throughout the course of that time between August 2019 and February 2022, "we had fluctuations in these accounts ranging from $1.2 billion at the highest to $1,700 at the lowest," she said. "Because these accounts operate similar to checking accounts, there was money flowing in and out of these on a daily basis."

The system's investments are valued at about $21.3 billion, he said.

"The ATRS Board makes investment decisions based upon recommendations from the ATRS investment consultants," Rhoden said this week in a written statement. "ATRS does not have a ESG investing mandate and the ATRS investment policy is designed to maximize results for the participants in a prudent and fiduciary manner."

The system's investments are valued at about $1.587 billion, she said.

"ASHERS does not have an ESG investing mandate, but ESG is considered as part of our investment process," Smith said in a written statement.

Asked whether Milligan plans to try to eliminate the teacher retirement system and highway employees retirement system's investments managed through BlackRock as a trustee on the boards of the two systems, Peterson said "not that I'm aware of.

She said Milligan trusts the leadership of the boards to initiate that discussion when they feel the timing is right.