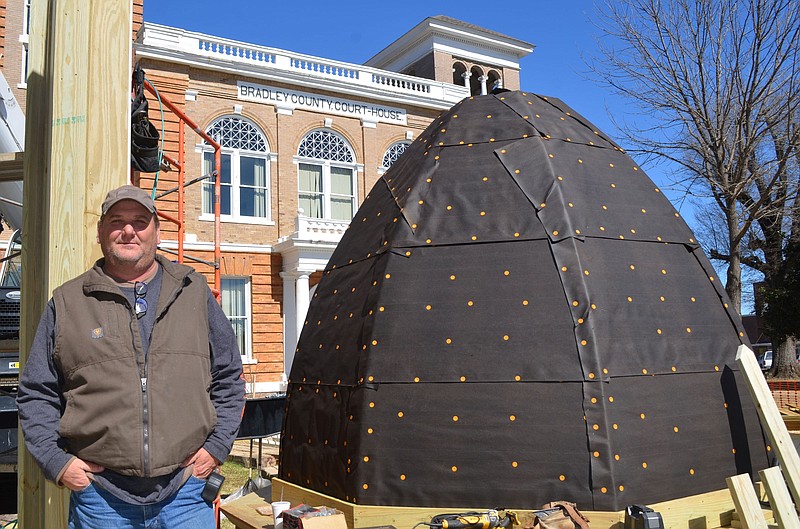 Repairs are being made to the Bradley County Courthouse dome. Job superintendent Will Martin, left, hopes to see the refurbished bell tower, cupola and dome reset atop the historic structure in March. (Special to The Commercial/Richard Ledbetter)

Renovations are underway for the Bradley County Courthouse roof, dome and cupola at Warren.

The first courthouse at Warren was built in 1856 and burned down in 1901. The current courthouse was designed by architect Frank W. Gibb and constructed by E.L. Koonce in 1903.

Built back on the same town square as the original, it was listed on the National Register of Historic Places in 1976. It was described on the register "an unusual combination of classical characteristics."

Blake Dunn of the El Dorado based firm Connelly, Abbott, Dunn and Monroe, is the lead design architect and project manager for the renovations.

"About two years ago, we did a grant application for restoration to the top of the courthouse clock tower," Dunn said. "The roof had deteriorated to the point of having leaked for some time. Our initial focus was on tearing off all the clock tower roofing back to the original wood decking to replace it with a new roofing system."

"We also planned to repair the existing eight legs of the octagonal cupola that sits atop the roof and supports the dome," he said.

The 1903 vintage legs are built of wood that at some point in the past were covered by sheet metal sheathing with the intent of retarding deterioration from exposure to weather.

After doing the design work and receiving approval from the Arkansas Historic Preservation Program to fund the repairs, they began the actual work, according to Dunn.

"When we unwrapped the cupola legs, we discovered they had no structural integrity left and were in fact at the point of complete collapse. In addition, we found more structural problems and recognized the cupola was in danger of imminent failure. The clock bell was about to collapse into the floor below. The only thing we found that was still structurally sound was the dome itself."

Bradley County Judge Klay McKinney declared an emergency and vacated all offices immediately beneath the failing roof and bell tower.

"We were in a bad situation here and everybody knew it," McKinney said.

Taking office in 2017, McKinney immediately recognized, "nothing was level, plumb or square in the old building and when the wind blew from a certain direction, water would puddle on the upstairs floor."

"We are just thankful Historic Preservation wants to help us keep up these old courthouses," McKinney said. "They first stepped in with their assistance around 2000."

A former judge received an award of excellence in 2015 for his work restoring the courthouse foundation to prevent the south wall from falling into the street.

"We were awarded the funds in May of 2021 for the current work and have just gotten started. Southern Diversified of El Dorado is doing the work," McKinney said.

"A giant crane was brought in to set the cupola off the roof and onto the courtyard. Now all the original wooden components besides the dome are being rebuilt with treated materials right down to the brickwork," Dunn said.

Including all previous funding, by the time the present project is done, Historic Preservation will have invested more than $800,000 into conservation of the vintage courthouse.

"We are putting an all steel skeleton inside the clock tower that'll be wrapped in wood to look like the original structure but avoid a future re-occurrence of the present issues," Dunn said.

The refurbished cupola will be topped off by Cross Roofing of El Dorado in the same fashion as the original with slate tiles and copper trim. Job superintendent Will Martin said he hopes to do the heavy lift resetting the new bell tower, cupola and dome atop the courthouse in March. 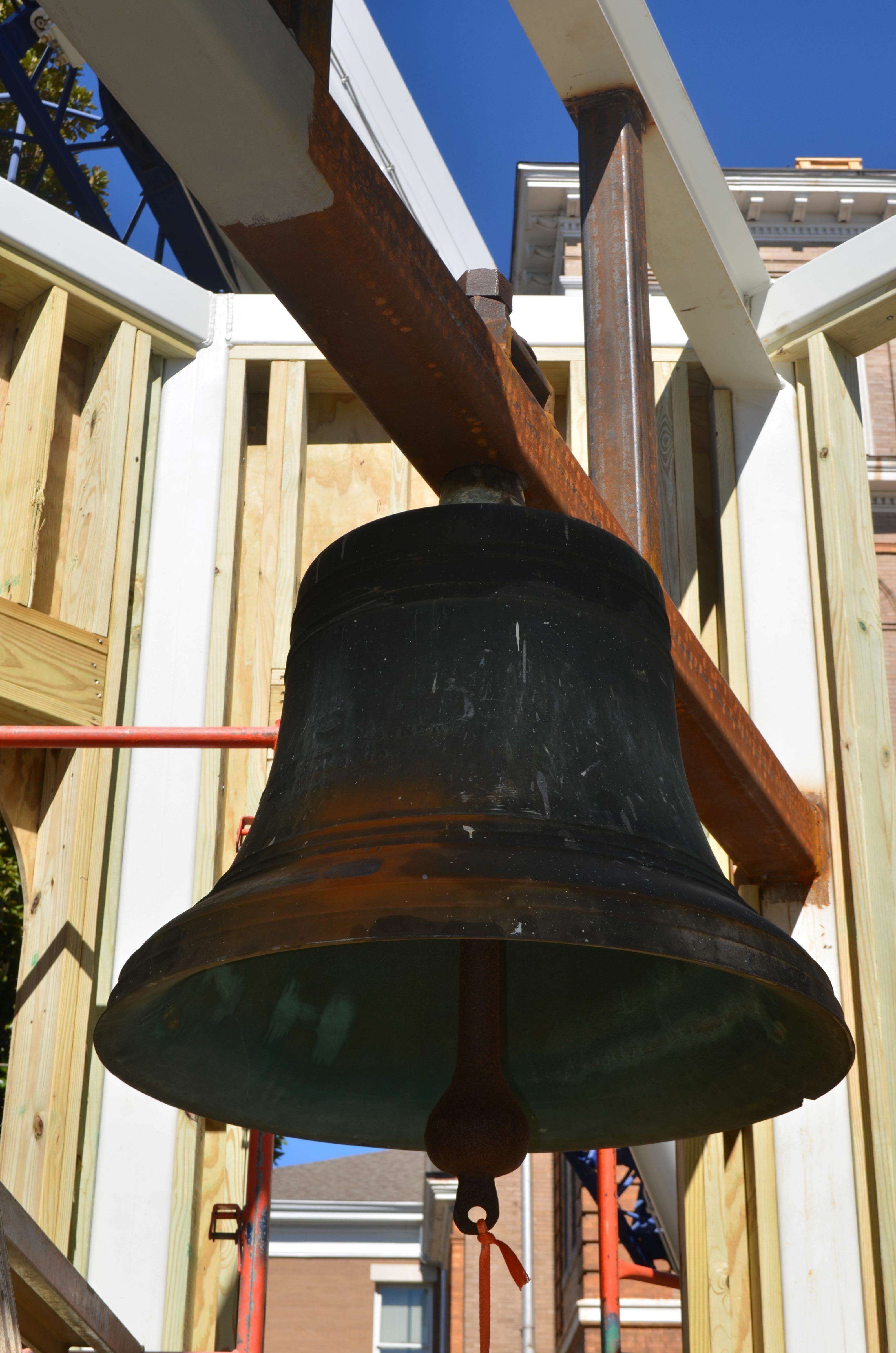 The 1903 vintage clock bell has now been mounted in a new steel cradle. (Special to The Commercial/Richard Ledbetter) 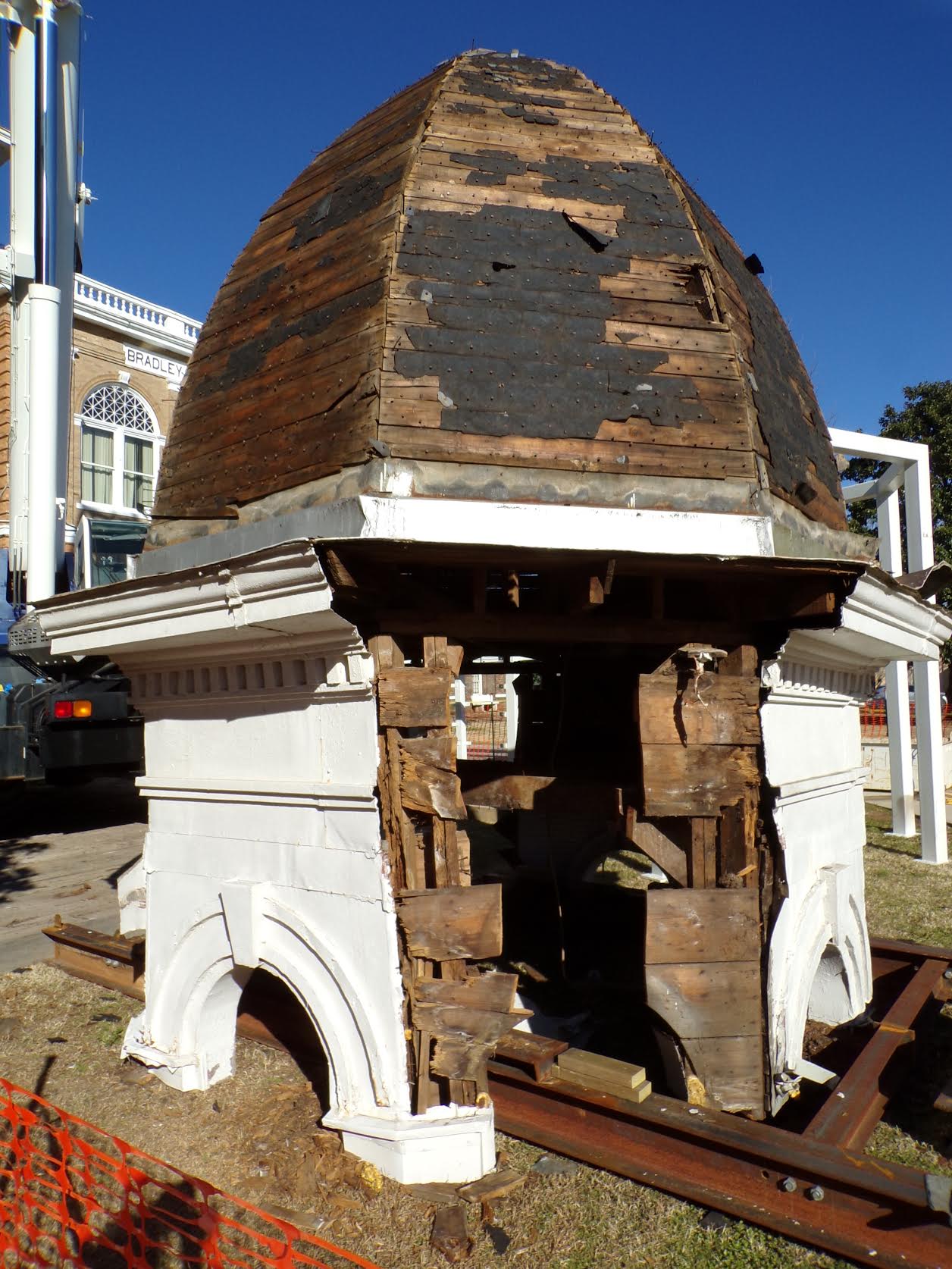 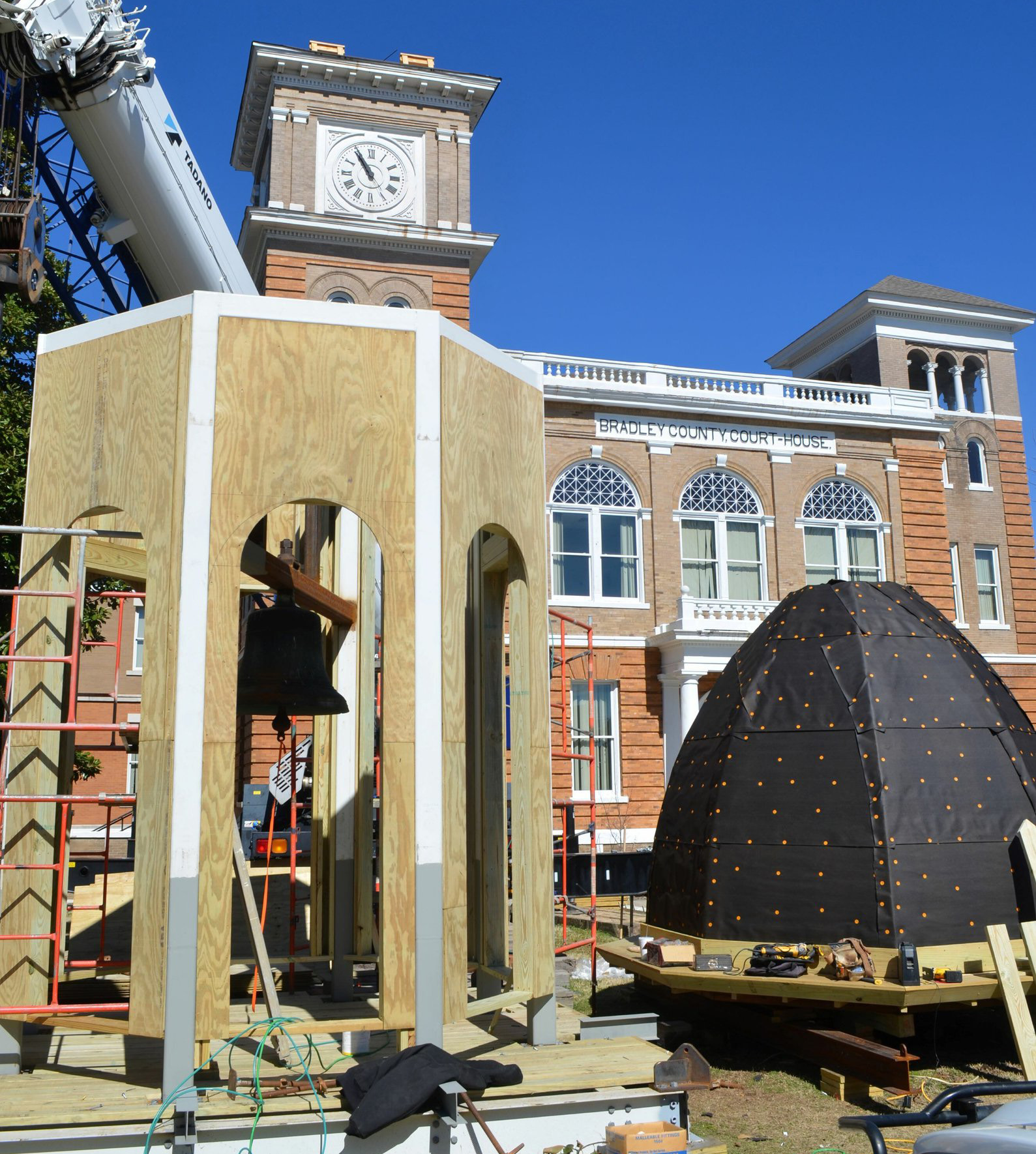 The rebuilt octagonal shaped cupola and refurbished bell tower dome approach completion with hopes of reinstalling them atop the courthouse in March. (Special to The Commercial/Richard Ledbetter)