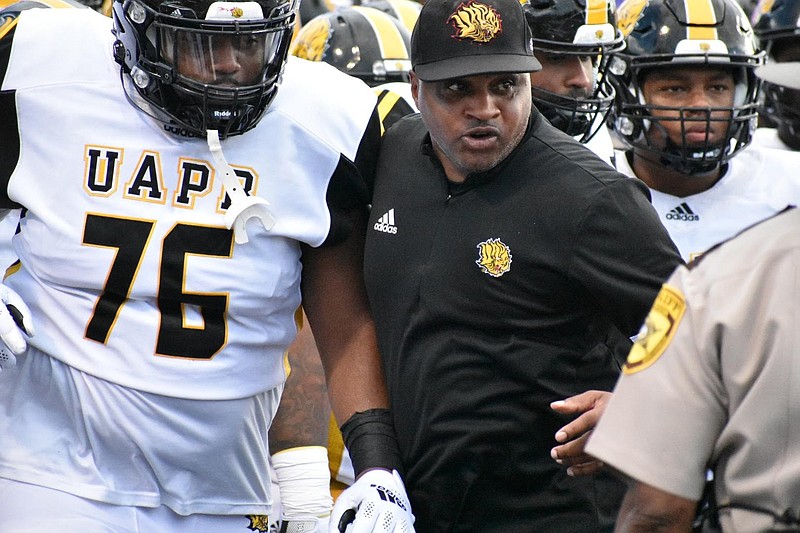 UAPB Coach Doc Gamble leads his team onto the field for a Sept. 18 game at the University of Central Arkansas. (Pine Bluff Commercial/I.C. Murrell)

A Big 12 team, a return to St. Louis and a debut appearance in the Turkey Day Classic highlight the University of Arkansas at Pine Bluff's 2022 football schedule.

UAPB will visit a major-conference power for the third time in four years when it faces Oklahoma State University on Sept. 17. Oklahoma State reached the Big 12 championship game and knocked off the University of Notre Dame in the Fiesta Bowl to finish 12-2 and ranked No. 7 in the nation.

The Cowboys will be the Golden Lions' second Big 12 opponent in four years, following Texas Christian University in 2019. UAPB agreed to play Oklahoma State as part of its deal to move last October's game with the University of Arkansas from Fayetteville to Little Rock.

UAPB will play in the Gateway to the West for the first time since 2011 when it takes on Alabama A&M University in the St. Louis River City HBCU Classic on Sunday, Oct. 16. That will be followed by the first bye date and visits to Florida A&M and Grambling State universities, and the Nov. 12 home finale against Prairie View A&M University, which just hired Bubba McDowell to replace former UAPB offensive coordinator Eric Dooley as head coach. Dooley is now Southern's head coach.

Alabama State University will welcome UAPB for its annual Turkey Day Classic on Thanksgiving Day, Nov. 24. The game traditionally pits the Hornets against Tuskegee University, but an in-state or SWAC opponent has taken part in the game seven of the past eight years, with Prairie View the most recent SWAC team to visit (and win) in 2019.

UAPB named another co-defensive coordinator and hired a linebacker coach.

Thomas Sims and Jake Bahr are the fourth and fifth new assistant coaches Doc Gamble has announced this offseason. Sims will lead the defense along with Jeff Burrow, who was introduced earlier this month, and will coach the defensive line.

Sims worked the past four years at Savannah State University. He was promoted to defensive coordinator in 2019 and helped lead the Tigers to their first winning record in 21 years. His defense in 2019 totaled a conference-best 12 interceptions and 27 sacks.

Bahr was a defensive graduate assistant at the University of Connecticut in 2018, moved into quality control in 2019 and became linebackers coach in 2021. The Texas Lutheran University began his career at his alma mater as defensive line and special teams coach.