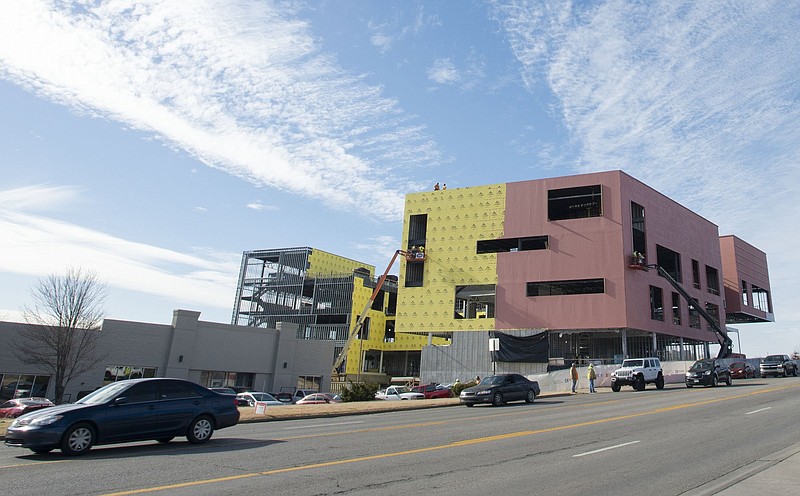 Construction continues at the University of Arkansas, Fayetteville School of Art Windgate Studio + Design Center in this Dec. 27, 2021, file photo. The four-story, 154,600-square-foot building will triple the size of the school's current classrooms and work areas. It is located on the corner of Martin Luther King Boulevard and Hill Avenue. (NWA Democrat-Gazette/J.T. Wampler)

The newest academic art program at the University of Arkansas, Fayetteville supported by millions in Walton family grant money received preliminary approval Wednesday to enroll its first students in fall 2023.

A planned master's program in art history -- the only such graduate degree program in Arkansas -- will provide "immersive" travel opportunities and offer internships at Crystal Bridges Museum of American Art in Bentonville, according to documents presented to the University of Arkansas System board of trustees.

A trustees committee on Wednesday backed the proposed 2023 launch of the two-year graduate program, expected to enroll five students in its first year and 10 students in later years. Board documents described arts specialists as working in museums or galleries or in academic jobs, among other "art spaces."

Final approvals remain pending, but art history at UA is receiving financial support from the $120 million Walton grant announced in 2017 to support arts education at the university.

Charles Robinson, UA's interim chancellor, said tuition and fees for 36 hours in the academic program would normally come out to about $18,000.

"But for these students, there will be no cost, because the students will be fully funded from the art history graduate endowment provided by the Walton Family Charitable Support Foundation gift that established the [UA] School of Art," Robinson told trustees.

Endowment money from the Walton gift will cover tuition costs, Robinson said, with graduate assistantships and fellowships provided to students.

The foundation controlled by family members of Walmart founder Sam Walton provided to UA what the university has described as the largest gift ever to a U.S. university to establish or support a school of art.

Board documents from Wednesday's meeting stated that out of a $36 million endowment from the Walton grant supporting graduate students, $11 million will support graduate students in the art history program. Annually, this works out to about $484,000 in student support.

In addition to support for students, an art history program endowment of $7 million will provide about $275,000 each year, including support for some undergraduate programs and initiatives, and the larger Walton gift has also supported faculty hiring.

Crystal Bridges opened in 2011 with support from a different Walton foundation, the Walton Family Foundation, and from Alice Walton, daughter of Sam and Helen Walton.

Board documents described a working agreement between the university and Crystal Bridges, but stated that UA "maintains oversight of the program."

In a phone interview, Gerry Snyder, executive director of UA's School of Art, described the program's strong connection with Crystal Bridges. The degree program -- similar to the museum's focus -- is expected to be titled Master of Arts in Art History in Arts of the Americas, according to board documents.

"Most times, partnerships between academic units and museums are more transactional. Here, there's a real desire, and it's also baked into the gift, that we really want to elevate each other's resources and strengths to expand the capacity of both institutions," Snyder said.

Travel with a focus on culture will be part of the experience for students.

Board documents stated that "the immersive travel components of our program will develop cultural sensitivity among our students and expose them to new ways of seeing, thinking, communicating, and working," as will a planned visiting scholar program where "[w]e will prioritize scholars and creators of color in selecting these visitors."

Snyder said "it will be important" for the university to bring in a diverse cohort of students into the program.

A report released in 2019 by the Andrew W. Mellon Foundation found that museum staff had "become more racially and ethnically diverse over the last four years" based on survey data collected from 179 museums, with the percentage of "people of color" in "intellectual leadership positions" increasing to 16% among curators in 2018 from 12% in 2015.

But the report also noted that "very few men of color are in museum leadership positions in 2018." The report found that in the category of "museum leadership," the percentage of "people of color" was 12% in 2018 compared to 11% in 2015.

"I do see the graduate programs as having more diversity," Snyder said, adding that they "cast a wider net" and draw from beyond the region.

Board documents described a planned pilot travel excursion for "advanced undergraduates" to visit Alabama's Birmingham Museum of Art and the Birmingham Civil Rights Institute, as well as meeting with leaders of an advocacy group for Black artists known as the Souls Grown Deep Community Partnership, among other stops in Alabama.

Snyder said future trips might be to Mexico or South America.

"You start thinking about what Arts of the Americas will cover and think about the issues that kind of confront the world today, around race and gender, colonization, and things like that," Snyder said.

"Cluster hires of BIPOC (Black, Indigenous and People of Color) scholars, and specialists in all the underrepresented fields listed above, are beginning to transform the museum world, academia, galleries, and other art spaces as institutions begin to reinforce diversity, equity, and inclusion rhetoric with measurable action," the board document stated.

In Arkansas, Hayla May earned a bachelor's degree in studio art with a minor in art history in 2019 from the University of Arkansas at Fort Smith.

May went on to earn a master's degree in art history from Oklahoma State University, which is about 3.5 hours from her hometown of Greenwood, near Fort Smith.

"It was a really great opportunity," May said.

While at UAFS, May traveled to Paris as part of an art history class where she studied a medieval-era cathedral. May ended up presenting research at an academic conference in Kansas. At the event, an Oklahoma State faculty member, Jennifer Borland, made a strong impression, she said.

But had there been a graduate program in art history in Arkansas, "I would have considered it, for sure," May said in a phone interview, adding that students at UA-Fayetteville and others will benefit from having an in-state option.

"I think the field of art history could use some bolstering of resources and programs," said May, 24, who plans to apply to an art history doctoral program and pursue a career as a professor of art history.