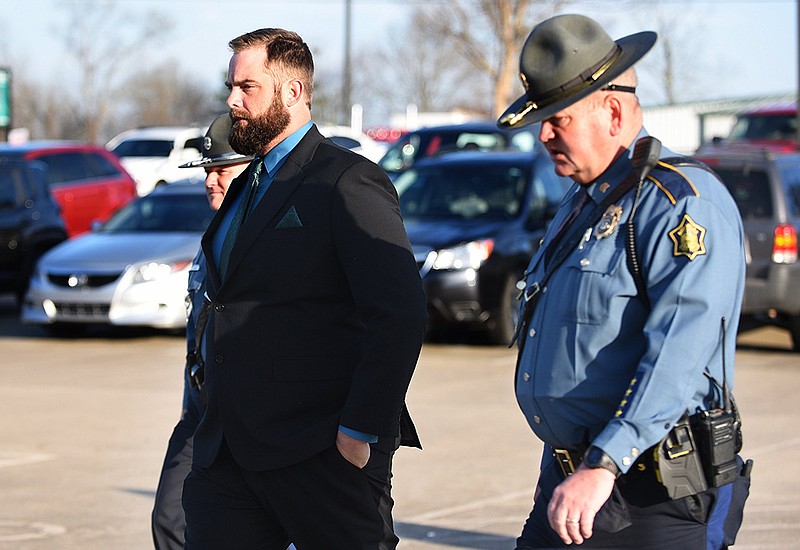 State troopers escort Michael Davis to court Thursday in Cabot for the third day of Davis’ trial. The jury began deliberations later in the day, with the option to convict Davis of negligent homicide if they don’t find him guilty of manslaughter. (Arkansas Democrat-Gazette/Staci Vandagriff)

CABOT -- Michael Davis, the former Lonoke County sheriff's deputy charged with manslaughter in the fatal shooting of a teenager last year, took the stand in his own defense before testimony concluded in his criminal trial on Thursday.

Jurors will return this morning to decide Davis' fate.

Davis cried Thursday as he described the events that led to him killing teen Hunter Brittain during an early morning traffic stop June 23.

Davis, 31, was charged with felony manslaughter after the shooting that has gained national attention from civil-rights activists. He faces up to ten years if convicted.

If convicted, Davis would be the first Arkansas law enforcement found guilty of a felony in an on-duty shooting in recent history.

Davis is one of only five Arkansas law enforcement officers charged in on-duty shootings since 2005, according to data compiled by the Arkansas Democrat-Gazette and the Henry A. Wallace Police Crime Public Database.

Before deliberating about 5 p.m. Thursday, the jury was given the option to convict Davis of negligent homicide, if it doesn't find him guilty of manslaughter. Negligent homicide is a misdemeanor and means Davis could still be employed as a law enforcement officer in the state.

The manslaughter charge mostly hangs on whether a jury believes Davis gave verbal commands to Brittain before fatally shooting him in the neck -- something prosecutors say didn't happen.

Davis testified during a cross examination that shooting without verbal commands during the traffic stop would have been "reckless".

Steve Higgins, deputy prosecutor on the case, said during closing statements that the evidence proves Davis didn't make any verbal commands before shooting. He said the event was traumatic and that possibly played a role in Davis' statement to Arkansas State Police investigators five days after the event.

Davis told the investigators he gave several commands including "get back in the vehicle," "stop" and "show me your hands before shooting," according to a video the jury watched Wednesday. He also gave the same statement while on the stand Thursday.

"I think he did the best he could at gathering a recollection," Higgins said.

The prosecution brought witnesses Jordan King and Landon Crowder to the stand during the case. Both were Brittain's friends. The three had spent the night and early morning replacing a transmission in the teen's truck.

King was test driving the vehicle, which he testified wouldn't shift into first gear or park, when Brittain was pulled over. Crowder testified he was about 50 feet away when the shooting took place.

Both testified they didn't hear any commands from Davis before the gunshot.

"They were both separated after the shot happened," Higgins said. "They told you the same thing they told the police on the night July 23. What motive would they have at that time to make this up?"

Higgins said it would have been hard for the teens to know that the statements they gave that night would be used in a courtroom nine months later.

He then played body camera footage from Davis.

He also yells at King, asking why they were driving the way they were. He also asked why Brittain jumped out of the car.

"He never mentions, 'why didn't he [Brittain] listen to my commands?'" Higgins said. "That is telling in the terms of what he did at that time."

Robert Newcomb, Davis' defense attorney, has stated that Crowder couldn't hear Davis from his position. Yet, Higgins argued, if he heard Rice's commands, he could have heard Davis.

Higgins said Davis was thinking at an emotional level.

"You don't want to make this decision based on fear or emotion," Higgins said.

Newcomb said during his closing argument that the jury needed to look at the person and try to decide whether he is credible.

He said there were several things that didn't make sense about the prosecution's case. He questioned why Brittain would drive a car down the road that didn't shift into first.

The defense attorney also questioned why Brittain jumped out of the car.

"It [prosecution's argument] has some logic until you look at the facts," Newcomb said. "All he needed to do was keep his foot on the brakes."

Newcomb also argued that Davis was afraid for his life.

"Shooting someone without seeing a gun is not necessarily wrong if someone reasonably believes their life is in danger," Newcomb said. "They are trying to say he acted out of emotion and not fact. They are saying it was wrong for him to think of his daughter and tell them he would come home."

Newcomb has emphasized to jurors that suspects putting their hands in unseen locations puts officers at risk, and he has leaned on statements from multiple law enforcement agents and special witnesses who took the stand during the case. Each agreed that hands are considered dangerous to officers and that it's a concern when hands can't be seen.

Davis took the stand Thursday, the third day of the trial. He gave an emotional statement, crying often. He told the jury he is a husband and father of one child. He also said his wife is currently pregnant.

He said he became a deputy to help people.

Davis told Newcomb he felt his life was in danger by Brittain's actions. He said he feared the teen was reaching for a rifle in the back of his truck. That was a statement that he didn't make to police in his original statement, the prosecution pointed out.

The teen, instead, had a coolant jug in his hand, when shot by Davis. The deputy testified he saw the jug fly from the teen's hands as the bullet struck.

The prosecution has said Brittain planned to use the jug to put behind his wheels because the truck wouldn't park.

Davis told the jury he started the day being awoken by his daughter at about about 9 a.m. He then went back to sleep and woke up about 2 p.m to spend time with her before work.

He clocked in about 4:45 p.m. and spent about the first 30 minutes on shift at the fire department where he also volunteers. His wife was in a fire department auxiliary meeting, and he helped out with his daughter while she attended.

There were a handful of calls for the staff on duty that night, Davis said. He said it was just before 3 a.m. when he passed Brittain on the side of the road.

Davis told the jury he was familiar with the area.

"I've patrolled that area since I've been on patrol," he said. "Four or five times a day I drive that same roadway."

He noticed Brittain stopped on the side of the road. He first saw the smoke from the vehicle. He also saw the reverse lights come on as he passed.

He pulled into church parking lot and followed Brittain when the truck drove by.

He ran the plates and the plates came back to the truck, Davis testified.

He was suspecting it might be stolen because it obviously wasn't operating fully, he said. It was loud and had a lot of smoke.

At 3 a.m. the vehicle went left of the centerline multiple times, he said.

"I believed the vehicle might possibly be stolen," he said. "A lot of times they'll steal them from other counties and bring them into our county."

He asked Rice to head his way in case the vehicle fled.

The blue lights were turned on, and he saw Brittain take his foot of the gas but then the vehicle appeared to gas it again.

Crowder testified earlier that the loud sound Brittain's truck was making was because it was slipping while trying to switch gears.

The vehicles ultimately stopped at Mahoney's Body shop, where the shooting took place. 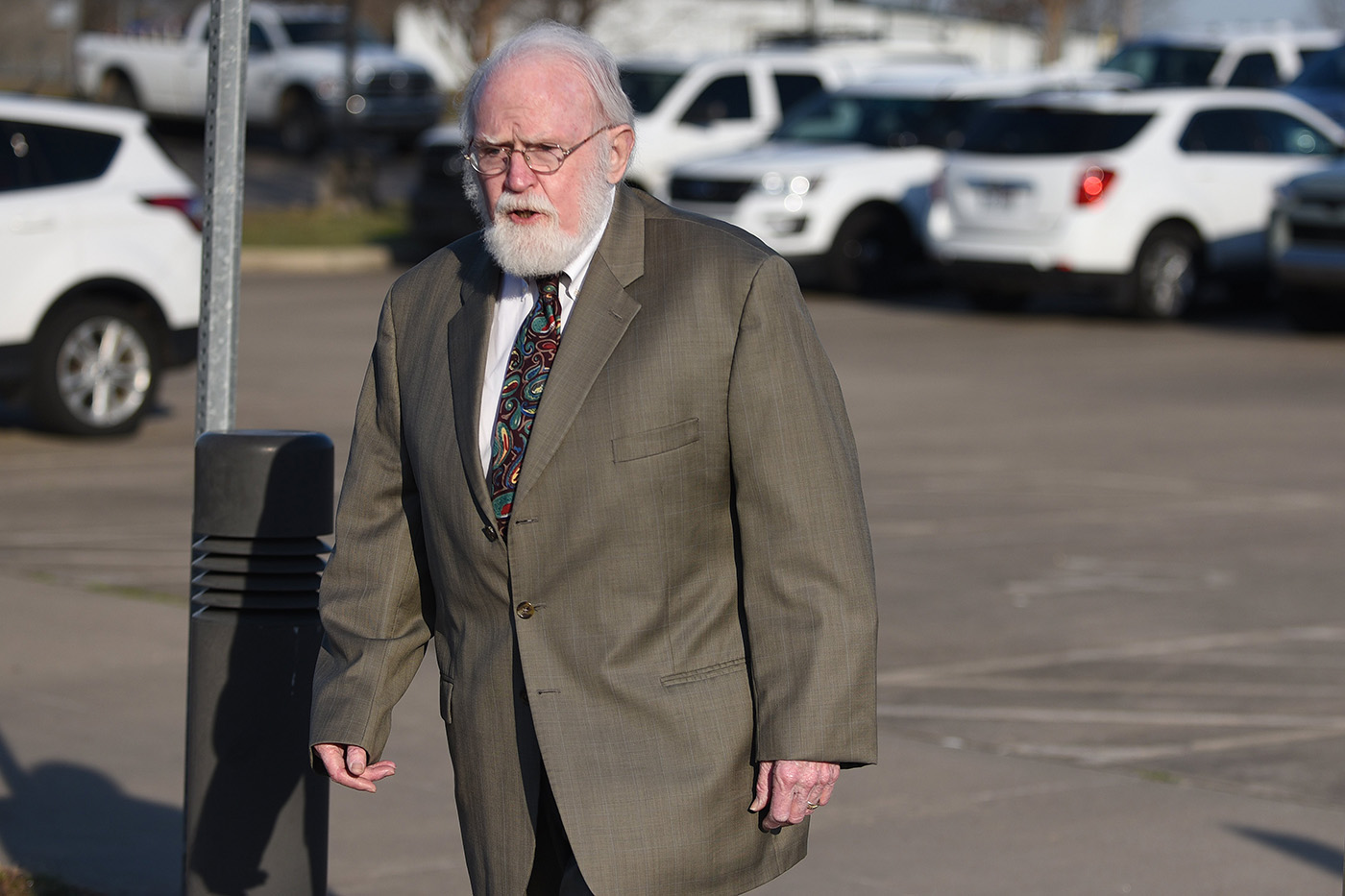 Defense attorney Robert Newcomb makes his way into the Cabot Readiness Center on Thursday. In his closing arguments, Newcomb said there were several things that didn’t make sense about the prosecution’s case. (Arkansas Democrat-Gazette/Staci Vandagriff) 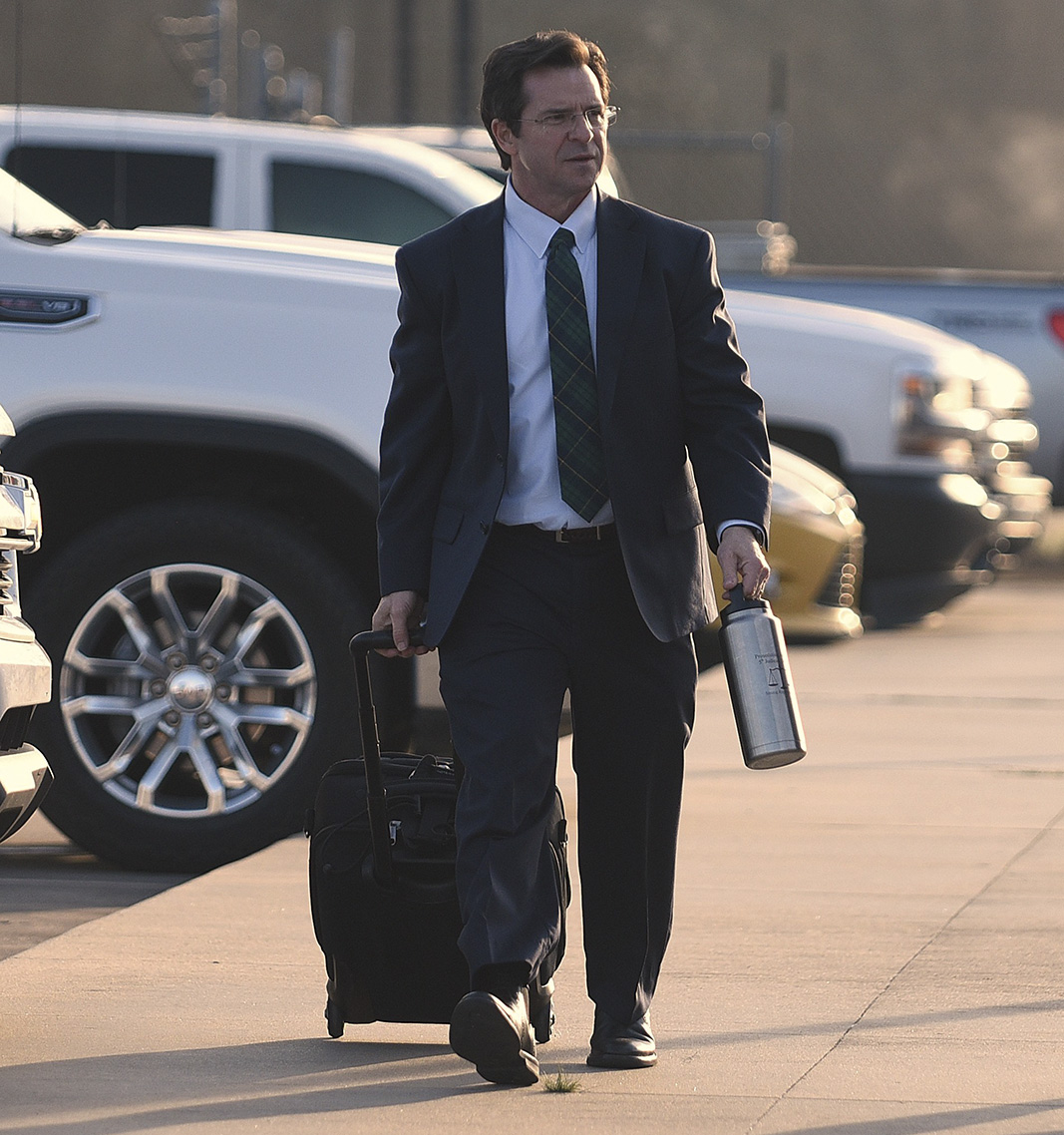