In war, some siding with Putin 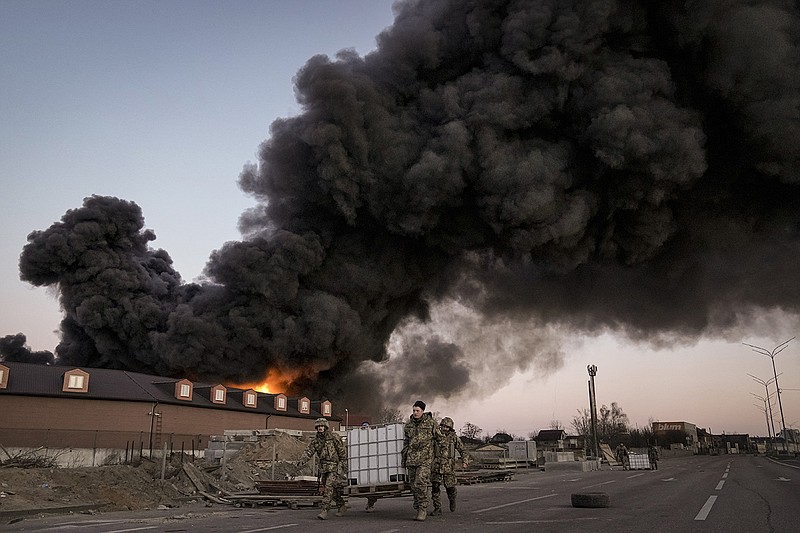 Ukrainian servicemen salvage containers Thursday as a warehouse burns in the background after a bombing on the outskirts of Kyiv. (AP/Vadim Ghirda)

Many countries have loudly and unequivocally condemned Putin for the war with Ukraine. But in countries where governments have remained neutral, tacitly supported Russia or encouraged the dissemination of false or sanitized accounts of the war, citizens are voicing a much more complicated and forgiving narrative of Putin's invasion.

Interviews with dozens of people in those countries -- from Vietnam to Afghanistan to South Africa to China -- reveal that while many are disturbed by the war and the loss of innocent lives, some are sympathetic to Russia's justifications for its invasion of Ukraine, and do not accept the good versus evil scenario presented by the United States and Europe.

Many found resonance in the argument that Ukraine's effort to join NATO compromised Russia's security. Some expressed an attachment to nostalgia for the old Soviet Union. Still others could not side with a West that they viewed as hypocritical.

"The U.S. invaded Iraq and no one made the same noise as people are doing against Putin," said Eni Aquino, 52, a sports commentator from Goiania in midwestern Brazil.

Brazil's president, Jair Bolsonaro, has strong ties to Putin and flew to Moscow right before the invasion, but has taken a position of neutrality on the war. Polls show wide approval for this stance.

Arthur Maia Caetano, 68, said that since shutting down his restaurant in Rio de Janeiro because of the pandemic, he has been using his time to read Russian news websites and bulletins on the social messaging app Telegram.

"When I started to look carefully at war, I saw that the first to die is the truth," Caetano said, citing claims circulating online, such as that Ukraine has hired actors to pretend they were injured and that it maintains biological weapons laboratories funded by the United States.

In China, outlets have republished official Russian propaganda without verification, including false reports that Ukraine had been using civilians as human shields and that President Volodymyr Zelenskyy had left Kyiv.

While Chinese officials have not explicitly endorsed the Kremlin's actions, they have framed the invasion as a rational decision by Russia to resist aggression from the West, and specifically from the United States.

Zhang Han, 37, a programmer at a technology company in the southern Chinese city of Shenzhen, said he was initially shocked by Putin's actions. But he said he also empathized with the Russian leader's desire to absorb Ukraine and pointed to China's ambition to unify with Taiwan, the self-governed island that Beijing has long claimed as its own.

"Of course, I pity the situation of Ukrainians and hope that the war can end soon," he said. "But that's the mindset of a big country."

In Vietnam, state authorities have also attempted to control the narrative about the war. Two editors for a Vietnamese online magazine and a state broadcaster said they were issued directives on reporting on the war that included reducing the extent and frequency of coverage, and banning the word "invasion." Both asked to remain anonymous for fear of government reprisals.

Vuong Quoc Hung, a 36-year-old stockbroker from Hanoi, said he grew up watching documentaries and films on national television about the Soviet Red Army heroes who battled Nazi Germany during World War II. That made him fall in love with Russia, he said.

"So when Russia attacks Ukraine, people like me will sympathize with Russia, assuming that it is purely Russian self-defense," he said.

Although Tran Trung Hieu, a 28-year-old independent filmmaker in Hanoi, firmly opposes the atrocities of war, he said his faith in Putin was unshaken.

"I'm quite sure that a wise leader like President Putin must have given a lot of thought before sending troops into Ukraine," said Hieu, who was born in Russia.

He added that he was "a big fan of 'Uncle Putin,' because he always takes drastic actions."

In India, the affinity for Russia is about much more than friendship. India relies on Russia for about half of its arms supplies, and has not spoken out against Russia. Some in India are critical of the United States for fighting wars overseas.

"Wherever they've gone, they've left it in a mess," said Naresh Chand, a retired lieutenant general in the Indian army who trained in Russia and Ukraine.

Some have complained the West's position on Ukraine's war reeks of hypocrisy.

Dr. Lucky Muange, who lives in Kiambu County, several miles north of Nairobi, said NATO and Western nations had little right to vilify Putin when they have in the past invaded and occupied poor countries, or interfered to topple their governments.

"So now they are shocked when Russia is the one doing it?" he said.

Since the start of the war, the South African government has been adamant about remaining neutral, and repeatedly called for peace. But officials have also gone out of their way to highlight the country's longstanding friendship with Russia.

Siyabonga Ntuli, a 28-year-old software developer in Johannesburg, said that Putin's claims about Nazis in Ukraine were false propaganda meant to justify the invasion. Still, Ntuli said, he believed that Putin did have good reason to go to war with Ukraine, because NATO's eastward expansion threatened Russia.

"It's a shame that Ukraine is going to end up picking up the bill for it," he said. "But I think that NATO knew it. I think they wanted to test his resolve."

Thandiswa Bonani, a 40-year-old fashion designer in Johannesburg, said she believed that Zelenskyy, the Ukrainian president, was "manipulating other countries to feel sorry for him."

Print Headline: In war, some siding with Putin