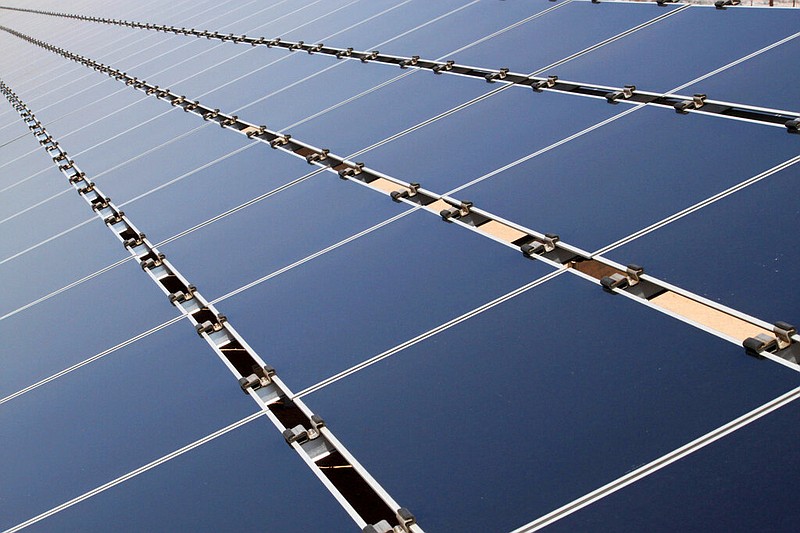 A portion of power used by the University of Arkansas, Fayetteville will come from solar panels as part of a deal approved by trustees Thursday.

"The project would generate about 8.7 megawatt-hours of electricity; that's about 6.3% of what the campus uses. To give you some perspective, the entire campus uses about 138 million kilowatt-hours a year," Scott Turley, UA's associate vice chancellor for facilities, told trustees.

The 10-member University of Arkansas board of trustees authorized the university to take part in what's known as a solar services agreement, a deal that's been in the works for more than two years.

Entegrity Energy Partners is responsible for designing and installing a solar array and providing energy as a service to the university. The solar panels will not be on UA property.

"Over the 25-year term of the agreement, the University would agree to purchase from Entegrity the entire output of the array at the specified rates for the energy generated," stated a letter from UA System President Donald Bobbitt recommending approval.

The deal requires a minimum amount of solar energy production and includes a price structure providing cost savings to the university, according to board documents.

"Based on reasonably projected utility rate increases, the SSA is expected to maintain positive cash flow each year over the life of the agreement," Bobbitt's letter stated.

Turley told trustees the "average discounted price of electricity over the 25 years is about 2.6 cents [per kilowatt-hour]," which he called "a good rate to have locked in over the course of the contract."

Previously, in 2020, the trustees board approved Entegrity Energy Partners for a deal involving an energy audit and improvements at UA expected to reduce energy expenses.

The deal approved in 2020 and the type of performance contract required Entegrity to "guarantee that the avoided cost of energy, along with any agreed to operations & maintenance savings will meet or exceed the cost of the improvements combined with the cost of financing," according to documents presented to the board in 2020.

The board approved the deal but UA can still pull out depending on what is known as a "grid access charge" that could affect costs.

Trustees in December 2020 approved a similar solar services agreement between Entegrity and the UA System Division of Agriculture.

Ed Fryar, a poultry entrepreneur and trustee, spoke in favor of the UA System checking on the feasibility of future solar deals involving the system as a whole, which he said could possibly result in greater savings, "and then have individual campuses and units participate in that." Trustees voted in favor of Fryar's motion for such a study.

Solar deals have been announced by various public entities around the state since the 2019 solar access law.