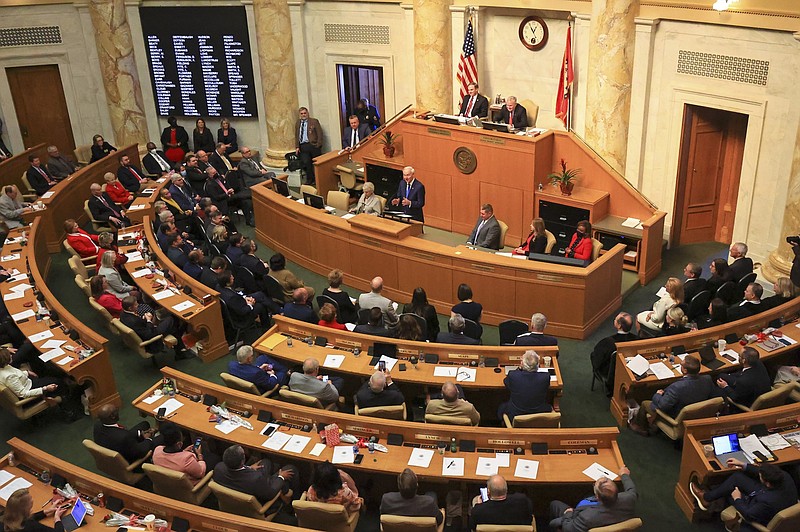 Gov. Asa Hutchinson speaks Feb. 14, 2022 at the state Capitol in Little Rock as he delivers his State of the State speech. (Arkansas Democrat-Gazette/Staton Breidenthal)

Arkansas Gov. Asa Hutchinson touted work done during the recent fiscal session while pushing back on criticism of his proposed prison expansion at Friday's meeting of the Political Animals Club of Little Rock.

The event was the group's first since March 4, 2020, because of the ongoing coronavirus pandemic. A crowd of about 160 attended the luncheon at the Governor's Mansion.

Hutchinson spoke positively about the fiscal session that ended Monday and praised lawmakers for keeping the session focused on appropriations bills.

"This fiscal session was outstanding. I'll just tell you from my time as governor, the spirit of the General Assembly has never been more predominant in a [fiscal] session as this last session, and the reason is, it's intentional leadership, to do our business and go home," the Republican governor said of the GOP-dominated Legislature.

He added that lawmakers "who want contention that has dominated some previous sessions, to me, is a shrinking minority and they did not dominate this last session."

A spokeswoman for Hutchinson said afterward that the governor did not want to name any specific legislators.

Under the Arkansas Constitution, lawmakers meet in regular session every other year and in fiscal sessions focused on budgetary matters in the off years. In those sessions, non-appropriation bills require a resolution approved by two-thirds of the members in both chambers to proceed. Efforts to introduce an abortion ban modeled after a Texas law that is enforced through civil liability, led by Sen. Jason Rapert, R-Conway, were unsuccessful.

The Revenue Stabilization Act passed by lawmakers this year transfers $150 million from the general revenue allotment reserve fund to various improvements and projects set aside in the restricted reserve fund.

Community organizations DecARcerate and the Arkansas Justice Reform Coalition have opposed the prison expansion, saying in a February news release that the beds planned include cells that would amount to solitary confinement, "a practice that inflicts immense suffering," and that overcrowding concerns could be remedied with policy changes, including addressing failure to appear in a different way and providing robust pretrial services.

"Arkansas' punitive approach ignores data-backed solutions that have created better community safety and well-bring in other areas of the country. investments in these ares will be more cost-effective than continually building more jail and prison beds," the groups said.

When Hutchinson expressed his support for the prison expansion in his State of the State address last month, he was interrupted by protesters who chanted "no more cages."

Hutchinson said Friday that the backup of state prisoners in county jails hurts local law enforcement and public safety efforts and pointed to his administration's addition of three new drug courts in the state, funding for crisis stabilization units and crisis intervention training for officers.

"Those efforts in reform will continue despite the need for additional space," he said.

Hutchinson is term-limited and set to leave office in January 2023. Asked about his future political aspirations, Hutchinson acknowledged speculation that he would run for president -- including recent reporting that he would attend a political event in New Hampshire -- but said he had yet to make a decision with 10 months left as governor.

He added that the New Hampshire trip would be an economic visit as well as a political one; Secretary of Commerce Mike Preston said officials would be meeting with companies that have a presence in Arkansas as well as other prospects.

"I do have a national platform set up, so expect to see me around. I have opportunities to engage with the national discussion," said Hutchinson, who is chair of the National Governors Association and the founder of the America Strong and Free 501(c)4 advocacy group. "Please continue to see me as being engaged."