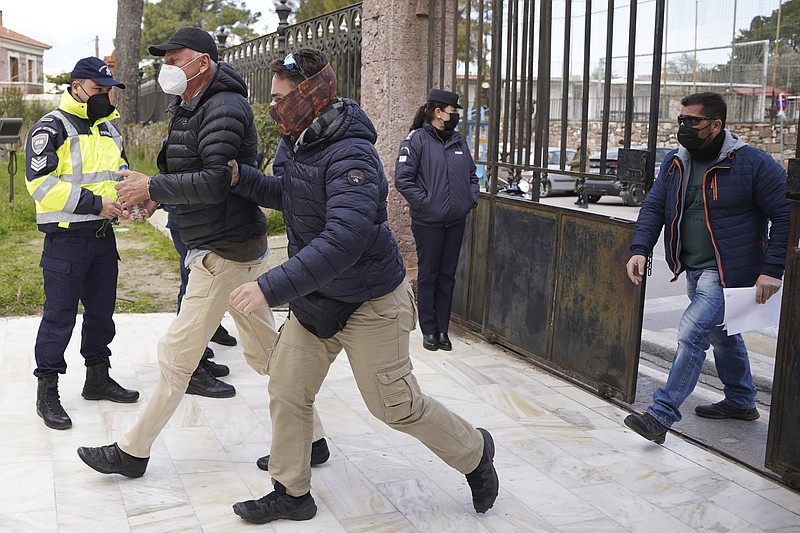 A police officer escorts Norwegian photographer Knut Bry to court Friday in the Aegean island of Lesbos, Greece. The 75-year-old photographer has been arrested on the Greek island on espionage-related charges. (AP/Panagiotis Balaskas)

LESBOS, Greece -- A Norwegian photographer, arrested on the Greek island of Lesbos, appeared in court Friday on espionage-related charges that his lawyer and supporters describe as unfounded.

Knut Bry, 75, who works with a local nonprofit organization that helps migrants and refugees, was arrested Wednesday on the island's main port of Mytilene while taking photos of the harbor.

"We are aware of the arrest of a Norwegian citizen on Lesbos. The Embassy will offer assistance according to the consular framework," the Norwegian embassy said in a statement to The Associated Press.

His lawyer, Haris Petsikos, said Bry would formally present his defense on Monday.

"Of course he does not accept these allegations under any circumstances," Petsikos said. "We don't see anything from the case file that is incriminating against him."

Greece's center-right government has taken a tough line on migration, intercepting boats carrying migrants from Turkey and limiting the role played by charities in helping migrants. Taking photographs of military areas can lead to prosecution for illegally obtaining state secrets and punished by imprisonment of at least one year.

KABUL, Afghanistan -- The Taliban have released three employees of Afghanistan's largest television station who were detained over a report that the country's new rulers had banned all broadcasts of foreign drama series, a channel executive said Friday.

Three staffers from TOLO TV were taken from the station on Thursday evening, according to Khpalwak Sapai, head of the TOLOnews department and one of the arrested. Sapai later said that he and Nafay Khaleeq, the station's legal adviser, were released within hours later Thursday.

Journalist Bahram Aman, a news presenter, was kept in custody overnight and released on Friday evening, the station said.

Moby Group, the media company that owns TOLO TV, said the detentions were the result of the station reporting "about the banning of the foreign drama series" -- a decision made by the Taliban-appointed Ministry for the Propagation of Virtue and Prevention of Vice.

The United Nations and the Committee to Protect Journalists decried the arrests and demanded the Taliban stop harassing Afghan journalists and stifling free expression through threats, arrests and intimidation.

The Taliban gave no explanation for their ban, the latest restriction imposed since their takeover of the country in mid-August. TOLO TV is an Afghan-owned media company with interests in South and Central Asia as well as the Middle East and Africa.

The Taliban did not respond to requests for comment from The Associated Press.

CAIRO -- Nearly 200 people have been wounded in the latest protests to break out in the Sudanese capital over deteriorating economic conditions after a military takeover, a doctor's union said Friday.

The Sudan's Doctors Committee issued a statement saying that 187 people were wounded Thursday in clashes with police in Khartoum, 70 of whom were likely struck by rubber bullets. Three of the wounded were shot in either the head or chest and are currently in intensive care, it added.

Thursday's marches were the latest in near-daily street protests since the military took over on Oct. 25, removing a civilian-led transitional government. Since then, at least 87 people have been killed and thousands wounded in a bloody crackdown on protesters, according to the doctor's union.

WARSAW, Poland -- Peter Paul Rubens' 17th-century masterpiece "Portrait of a Lady" has sold for nearly $3.4 million at a Warsaw auction, becoming the most expensive artwork ever bought on the Polish art market, the auction house said.

The painting sold for $3.37 million, auction fee included, at an Old Masters auction Thursday night at the Desa Unicum.

It was the first painting by Rubens ever to appear on the Polish market. It was put on sale by a British citizen.

Before the auction, the value of the Flemish master's oil-on-canvas portrait of a dark-haired woman in a rich black velvet dress had been estimated at between $4.5 million and $6 million.

Experts say the work, painted by Rubens around 1620-25, with involvement from his Antwerp workshop, could be a likeness of the painter's first wife, Isabella Brant, or of a member of the Duarte family of jewelers, who were Rubens' neighbors. The model could also possibly have come from the Spanish royal court.

In the past, the painting has belonged, among others, to 17th-century British painter Sir Peter Lely. It was last shown in public in 1965. 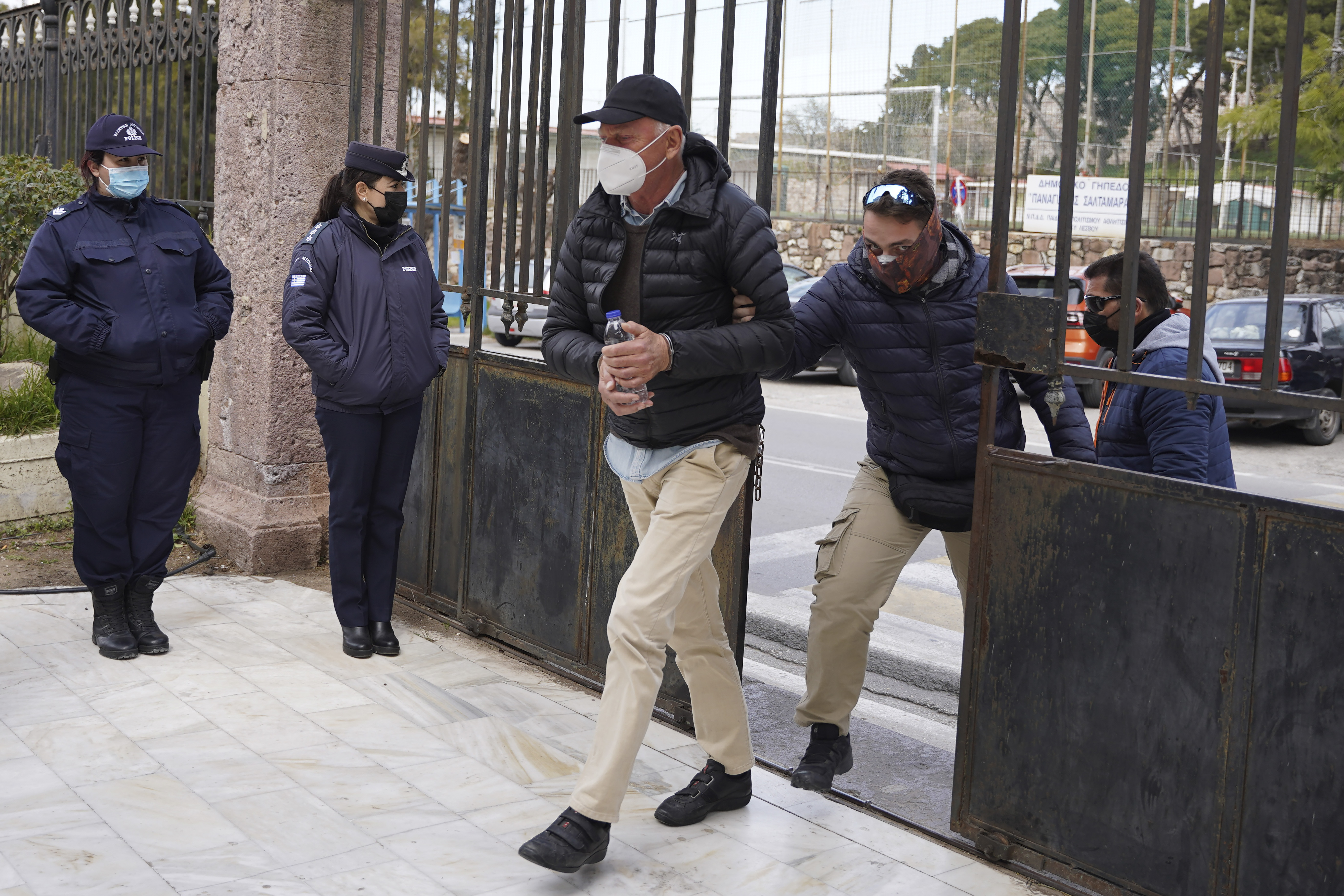 A police officer escorts Norwegian photographer Knut Bry to the court in the Aegean island of Lesbos, Greece, on Friday, March 18, 2022. A 75-year-old Norwegian photographer has been arrested on the Greek island of Lesbos on espionage-related charges and is due to appear in court. Knut Bry was working with a local non-profit organization that helps migrants and refugees. Bry's lawyer told the AP he would formally present his defense on Monday after being granted time to prepare his case. (AP Photo/Panagiotis Balaskas) 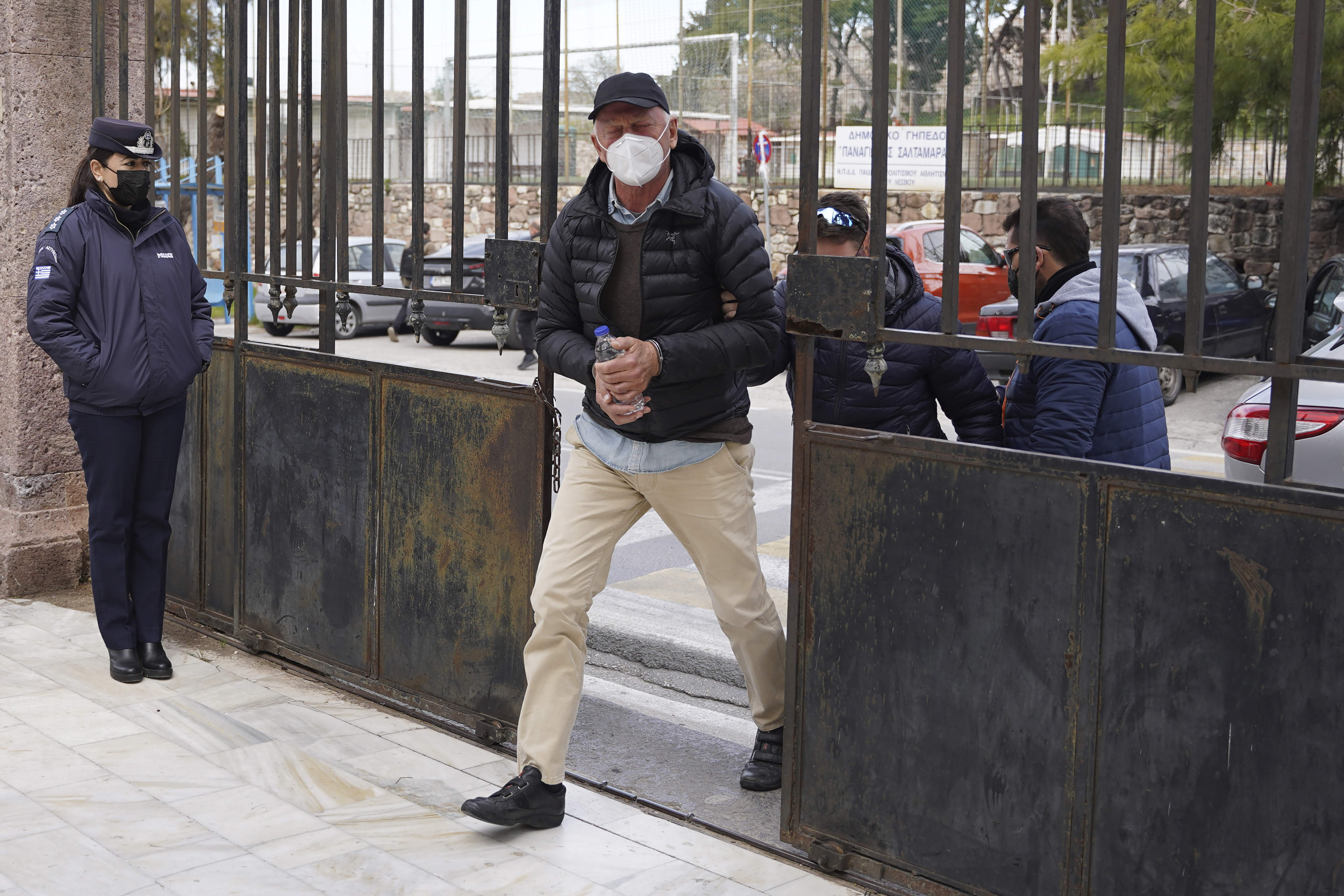 A police officer escorts Norwegian photographer Knut Bry to the court in the Aegean island of Lesbos, Greece, on Friday, March 18, 2022. The 75-year-old Norwegian photographer has been arrested on the Greek island of Lesbos on espionage-related charges and is due to appear in court. Knut Bry was working with a local non-profit organization that helps migrants and refugees. Bry's lawyer told the AP he would formally present his defense on Monday after being granted time to prepare his case. (AP Photo/Panagiotis Balaskas)